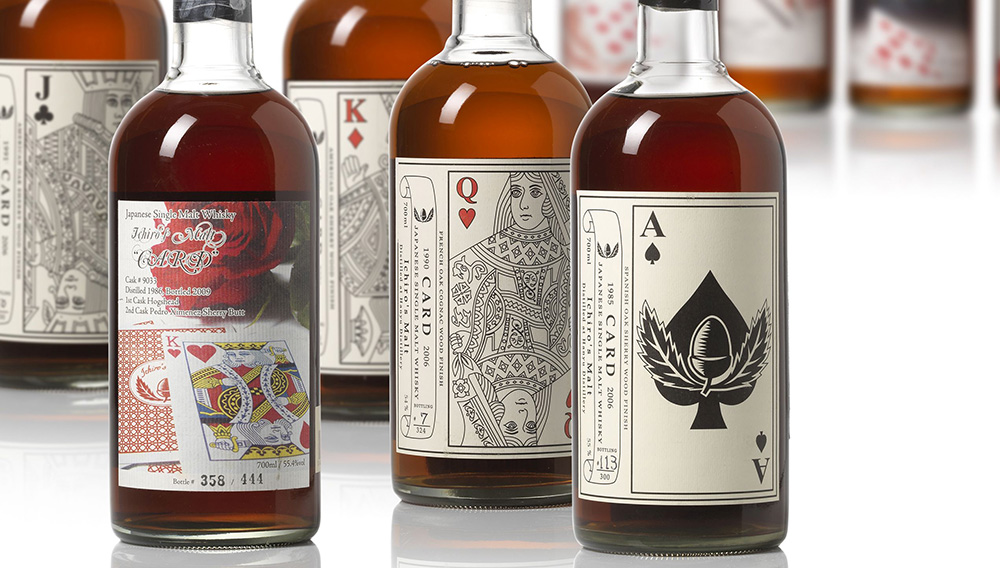 UPDATE: Bonhams sold Hanyu Ichiro’s Card Series of Japanese whiskey and the 52-year-old Karuizawa single malt on August 28 for $489,978 and $118,543, respectively—world-record-setting prices for both a series and single bottle of Japanese whiskey.

On August 28, Bonhams Hong Kong will be dealing out a complete deck of Hanyu Ichiro’s Card Series Japanese whiskey—a set of 54 bottles that only three collectors in the world are known to have in its entirety. Never before offered at auction, the scarce series of spirits are part of the Hanyu distillery’s last hand after being in the game for generations.

Since the early 17th century, Hanyu’s Akuto family had found success making sake, but it wasn’t until 1941 that Isouji Akuto developed a single-malt whiskey distillery named after the city in which it was located. Although weathering World War II, the distillery was finally defeated by deflation of the yen and the nation’s economic recession at the start of the millennium. It was sold and silenced in 2000, a year before the Nikka distillery’s 10-year-old expression Yoichi was named “Best of the Best” by Whisky Magazine and put Japanese single malts on the map. But not all was lost. Ichiro Akuto (Isouji’s grandson) managed to keep 400 casks, out of which the 54 best—from the years 1985 to 2000—were used for the bottling of his playing-card collection. Beginning with the King of Diamonds in 2005, the pack played out with the Joker in 2014.

While the Hanyu lot may be a highlight, expecting to fetch up to $310,000, it will not be the only high roller at the table for the Bonhams auction. Equally as exciting to connoisseurs will be 52-year-old and 33-year-old whiskeys from Karuizawa (another revered distillery relegated to memory) expected to go for up to $65,000 and $31,000, respectively. The auction will start at 6 pm at the Bonhams Hong Kong gallery. Bids will be accepted in person and online. (bonhams.com)