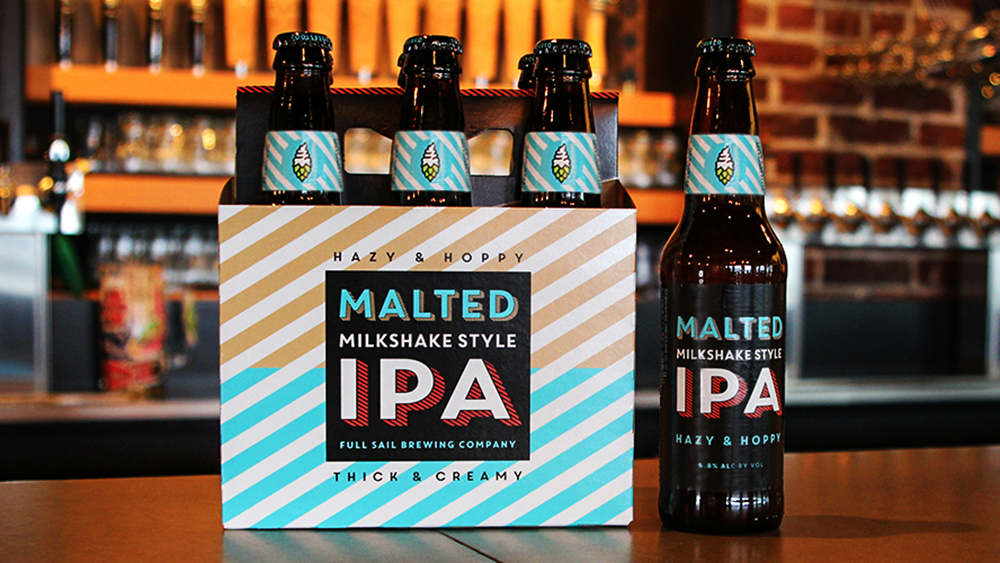 My mentor in the booze writing business is a man named Terry Sullivan, who wrote a mixology column for GQ magazine in the 90s, long before the M-word got co-opted and vulgarized by the tub-thumpers of the craft cocktail revolution. Among the many nuggets of Terry imparted about tippling were don’t drink anything the color of Papa Smurf and avoid alcoholic beverages posing as childhood treats. Terry Sullivan is one smart dude.

So it was with some trepidation that I broke one my mentor’s rules and sampled Full Sail Brewing Company’s new Malted Milkshake-Style IPA ($9/six-pack), a brew one imagines Mister Softee cracking open after a long day of getting chased around in his truck by swarms of custard-crazed moppets. This is not a high-end beer, along the lines of Sam Adams’ Utopias, but in taste, it is rather luxurious. With all due respect to Mr. Sullivan, Full Sail’s ode to the malt shops of yesteryear is a treat any beer-loving big person ought not miss out on. It’s hazy, hoppy, smooth, and cream—a mash-up of styles that makes for some seriously gratifying grog.

Milkshake beer is a trend that dates back to 2015, when some adventurous brewers started experimenting with putting non-fermentable lactose (milk sugars) into traditional New England style IPAs, which are aggressively hopped and purposely cloudy. The brain trust at Oregon-based Full Sail uses lactose along with a touch of natural vanilla to achieve their IPA’s milkshake-like creaminess and flavor. The yeast strain makes the beer hazy and gives it some fruitiness. An array of hops including Ekuanot, Denali, and Cascade provides a measure of bite—let’s not call it bitterness—that balances out the brew. This is not a “session beer”—a term that Full Sail is widely credited with coining—but rather a one (or two) and done that’ll leave you feeling snug as a bug in rug (sorry, but my inner-child has been set free).

Malted Milkshake-Style IPA is bottled at 13.6 proof and is available for purchase in 27 states. Whipped cream and cherry on top sold separately. Oh, and if Terry Sullivan should ever ask, this information did not come from me.