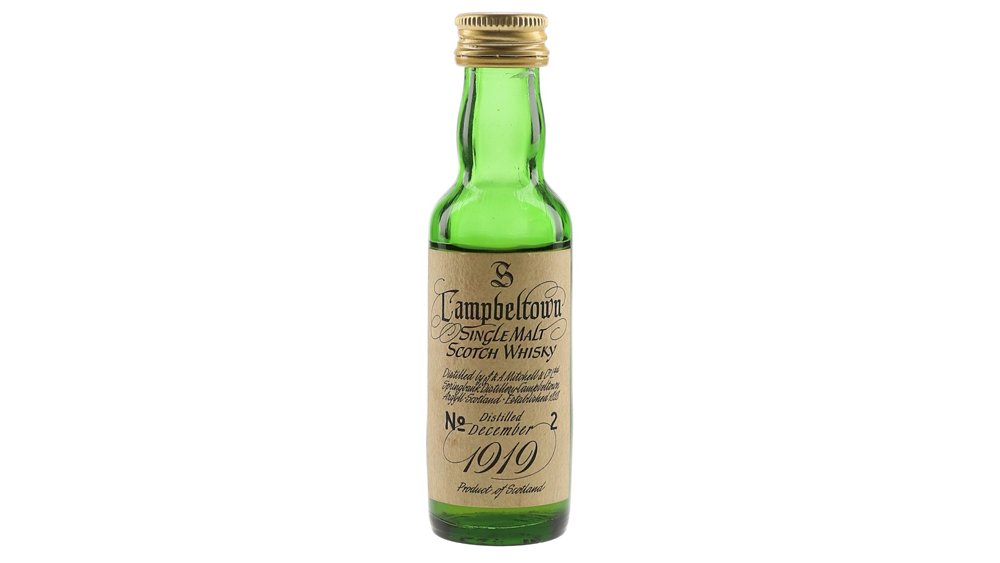 Mini bottles of booze are usually found in very specific locations and circumstances–airplane drinks carts, distillery gift shops and flattened bottles of Fireball littering city streets are a few that come to mind. But a miniature 50ml bottle of single malt scotch whisky just broke a new record by selling for nearly $9,000 at auction, the equivalent of nearly $200 per milliliter of liquid.

The whisky in question is a 50-year-old single malt distilled at the Springbank distillery in 1919 that sold on the website Whisky.Auction. Given its age and vintage, it’s obvious that this is a very rare and limited whisky. The new sale price actually beat the record that the same whisky set last year, when it sold for just under $8,000 in August of 2021.

Whisky.Auction director Isabel Graham-Yool told the website The Spirits Business that these prices are not unexpected because of the scarcity of the spirits. “Much of the liquid we see coming to auction in miniatures is simply unavailable in full bottles, having been consumed many years before,” she said. “Miniatures often outlive their full-size counterparts in ‘souvenir’ style. And sometimes, the liquid is so scarce that only miniatures ever existed.”

If you’re in the market for mini whiskies, there are plenty to be found, ranging from affordable to exorbitant. These tiny bottles are highly collectible, but of course not everyone who keeps a stash is a fan. Last December, the BBC reported that a man in Kettering, Northamptonshire, United Kingdom named Brian Marshall sold his collection of minis for almost 30,000 pounds (or $36,000). Marshall was quoted as saying that he thought whisky tastes horrible so he hadn’t opened a single bottle–which, of course, is the key to ensuring that any collection retains its value. Given how inexpensive current miniature bottles of whiskey are, why not start your collection now. You never know, it might just yield a windfall of cash someday in the future.