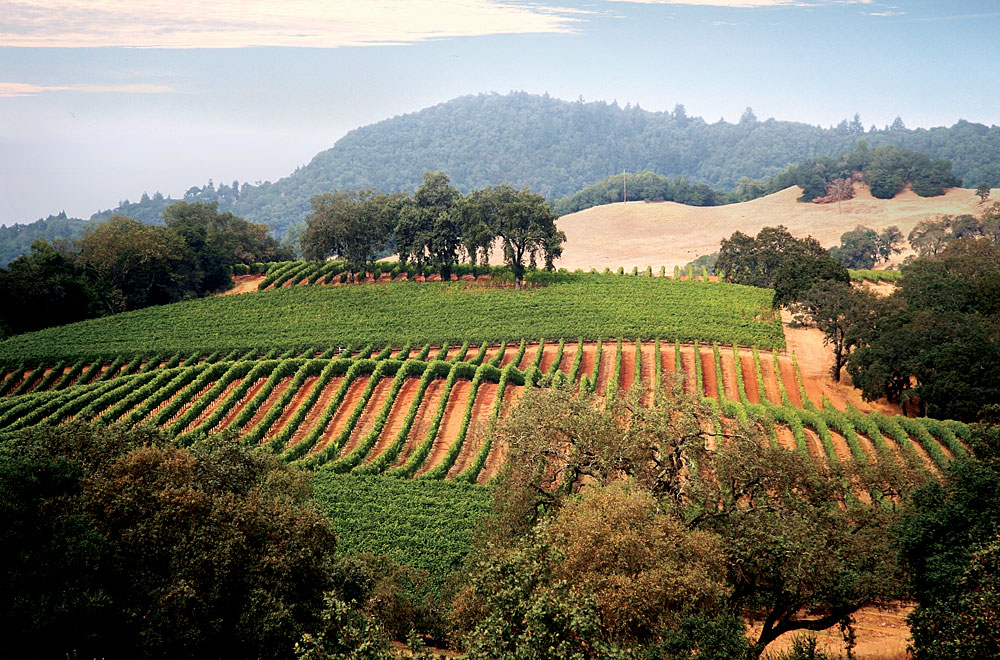 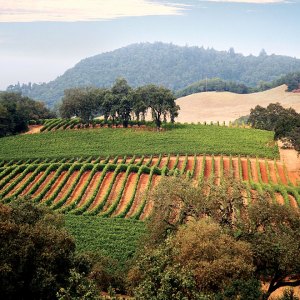 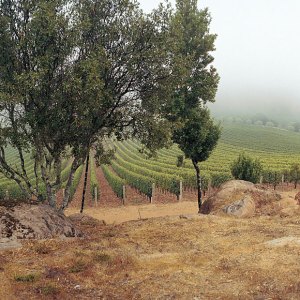 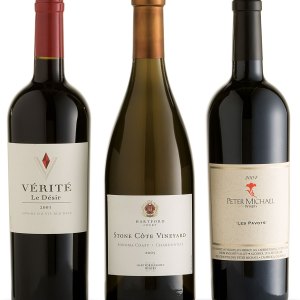 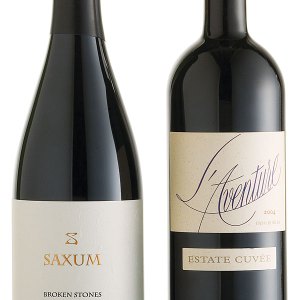 California is arguably the most important wine-producing region in the New World, and Napa Valley is its viticultural heart. The valley stretches 30 miles north from Carneros to Calistoga but is only about 5 miles wide, sandwiched between the Mayacama and Vaca mountain ranges. European immigrants in the 19th century recognized its variegated soils and contrasting microclimates as an artist’s palette from which a vintner could draw to create a masterpiece. The phylloxera epidemic that struck France in the 1880s offered California winemakers the opportunity to establish their reputations, and many, such as Charles Krug, did. Inglenook and others followed, and Napa’s reputation for excellence has grown ever since, despite the devastations of Prohibition. Though nearly all the major wine varietals have been grown here, Napa rightly continues to be admired for its incomparable Cabernet Sauvignon.

David Abreu is, in many respects, the father of the boutique, small-production Cabernet Sauvignons for which collectors vie at auction, given that he is or has been the consulting vineyard manager for producers such as Araujo Estate, Grace Family, Colgin Cellars, and Sloan. Yet his own Madrona Ranch Vineyard Cabernet is perhaps the rarest of them all—a startling blend of power and grace. Recommended Abreu Cabernet Sauvignon Madrona Ranch 2003 ($575)

The Eisele Vineyard in Calistoga is a Napa legend, producing an assortment of grapes—Cabernet Sauvignon, Sauvignon Blanc, and even Syrah—of distinctive character and superior quality, thanks to the unique microclimate. Daphne and Bart Araujo acquired this prize in 1990, when it became the centerpiece of Araujo Estate, whose powerful, gorgeously textured Cabernets keep the legend alive. Recommended Araujo Estate Eisele Vineyard Cabernet Sauvignon 2004 ($355)

An art expert, Ann Colgin has a well-developed eye for beauty. It is no surprise, then, that when she determined to hang a shingle on her own winery, in 1992, she chose to do it in Napa Valley. Her first wine, produced in consultation with winemaker extraordinaire Helen Turley, came from the Herb Lamb Vineyard, which, in large part because of Colgin, is another property that inspires awe among aficionados. The Tychson Hill Vineyard yields another dark, satisfying, and complex Cabernet Sauvignon, the 2002 vintage of which earned a perfect 100-point score from Robert Parker. Colgin’s newest parcel, the IX Estate, which surrounds the winery above Lake Hennessey, yields not only superb Bordeaux varietals, but also a stunning Syrah.

Founded in 1986 by Noako Dalla Valle with her late husband, Gustav, in the hills of the Oakville appellation, this boutique producer of less than 4,000 cases per year is perhaps most admired for Maya, a proprietary Bordeaux-style red blend. Both this wine and the estate’s marvelous Cabernet Sauvignon, when young, are hugely structured; as they emerge over time from their tannic cocoon, they reveal warm fruit and subtle detail.

Long regarded by many as the first “First Growth” producer in California, Harlan Estate is situated in the rolling foothills of the Mayacama Mountains, above what is known as the Oakville Bench. Consisting of 240 acres planted with Cabernet Sauvignon, Merlot, Cabernet Franc, and Petit Verdot, the estate focuses on two wines, the Proprietary Red and the Maiden. Vineyard manager Mary Hall and winemaker Bob Levy, along with owner Bill Harlan, remain committed to small-production, artistic wines that combine the graceful strength of a Cellini bronze with the tenderly wrought detail of a Rembrandt etching. And like works of fine art, these wines will last forever.

Founded in 1995 by Barbara Banke and Jess Jackson, owners of Kendall-Jackson, Lokoya was conceived as a boutique winery that would focus on producing pure Cabernet Sauvignon wines from single-mountain vineyards. In Lokoya’s short lifespan, its three winemakers—originally Greg Upton, then Marco DiGiulio, and now Chris Carpenter—have delivered superb wines of enormous power. Diamond Mountain tends to be slightly lighter in body with very round fruit; Howell Mountain is a powerful wine with dark fruit and firm tannins; and Mount Veeder, a blockbuster with huge tannins and intense minerality, is built for aging. Recommended Lokoya Cabernet Sauvignon Howell Mountain 2003 ($185)

Founded in 1992 by Jean Phillips, Screaming Eagle quickly became for collectors the Holy Grail of California wines. Indeed, in the days of the 1990s Internet boom, a stash of this Cabernet in one’s cellar was, along with a red Ferrari, a status symbol among dot-com millionaires. Those days—and dot-com dollars—are gone now, but Screaming Eagle, under new ownership, still defines ultraquality Cabernet.

No list of Napa greats would be complete without Shafer Vineyards, established by former Chicago publishing executive John Shafer in the mid-1970s. Though Shafer will jokingly suggest that the purchase of some of the finest acreage in the famed Stags Leap District was pure luck, he clearly understood that hillside vineyards would produce wines of greater concentration and body than those on the valley floor. The first vintage of the wine now known as Hillside Select was produced by Shafer himself in 1978, and that wine to this day continues to develop its nuances.

While Napa has traditionally emphasized Cabernet Sauvignon and other Bordeaux varietals, Sonoma County is remarkably ecumenical in its eclectic range of wines, as well as in its robust array of other agricultural activities. Not only is the county a hub of winemaking, but it is a mecca for gourmets, boasting some of the nation’s top chefs—such as Charlie Palmer of Dry Creek Kitchen and Cyrus’ Douglas Keane. Sonoma also supplies other restaurants across America with the finest poultry, meats, cheeses, and produce, making it unique in its marriage of great food and wine.

This estate in the town of Glen Ellen has been producing delicious reds and whites from the Alexander, Russian River, and Dry Creek valleys since 1986, when it was founded by Richard Arrowood and his wife, Alis. Although the winery has changed hands twice, Richard remains its winemaster.

This exceptional small-production winery, owned by Jennifer and Don Hartford, makes outstanding Chardonnay and Pinot Noir. Winemaker Mike Sullivan is adept at coaxing rich yet restrained flavor profiles from his single-vineyard Pinot Noirs, which include the Arrendell Vineyard in the Russian River Valley and the Velvet Sisters Vineyard in the Anderson Valley. His Chardonnays are masterful, precisely delineated, and elegant.

Kistler’s specialty is Pinot Noir and Chardonnay. Founder Steve Kistler has raised the quality of these grapes, as grown in the New World, to a level of excellence that would make the top domaines of the Côte de Nuits and Côte de Beaune envious.

Helen Turley’s and John Wetlaufer’s small-production winery produces exquisite Chardonnay and Pinot Noir, predominantly from the Sonoma Coast region; their Hudson Vineyard Chardonnay comes from Carneros. These wines amply reward the intrepid collector who manages to get hold of a bottle.

On a business trip to Silicon Valley, entrepreneur Sir Peter Michael ventured north to Sonoma, where he discovered a unique property in the Knights Valley region. His winery’s yields range from the delicate l’Après-Midi Sauvignon Blanc to the velvety dark Les Pavots Bordeaux-style blend.

In 1997, French winemaker Pierre Seillan was recruited by Kendall-Jackson owner Jess Jackson to create a Bordeaux-style wine from vineyards in Sonoma’s Alexander Valley. From the first vintage, 1998—a difficult one in California—the wine created a stir, displaying pronounced structure, refined texture, and elegant fruit. There are three blends in the portfolio: La Joie, which emphasizes Cabernet Sauvignon; La Muse, which is blended in a Pomerol style; and Le Désir, a Cabernet Franc-based wine in the St.-Emilion style.

California’s Central Coast, which stretches from Ventura to San Simeon, has been recognized only in the last decade or so as an important winemaking region. The region’s climate and soils are ideal for producing Rhône-style wines, as vintners like John Alban and Stephan Asseo have discovered. Pinot Noir and Chardonnay of exceptional quality can be grown along the coast in the Santa Maria Valley and in the Santa Rita Hills, west of Santa Ynez.

Owner John Alban established California’s first all-Rhône-style winery in 1986 near Arroyo Grande in San Luis Obispo County. His Viognier is honeyed and rich, his Grenache powerful yet balanced. But the Syrahs are the stars.

Stephan Asseo came from France to California to free himself from rigid appellation controls and to allow his instincts to guide his winemaking. Though his first releases were Zinfandel and a Bordeaux-style wine, he has quickly established himself as one of the state’s premier producers of Syrah.

Though his Saxum Vineyards’ production is small, Justin Smith’s wines are anything but. The mountainous James Berry Bone Rock Vineyard Syrah is a potent elixir, dense with dark fruit and the savory scents of wild sage and chaparral.

Sine Qua Non’s humorous labels are almost as famous as the wines in the bottles. Established in the mid-1990s by Elaine and Manfred Krankl, this Ventura-based winery produces diverse wines (Syrah, Grenache, Viognier, Pinot Noir, Sémillon, and Gewürztraminer) with names like The Hussy. The labels are playful, but the wines are seriously made.

Oregon’s cool climate has imbued the Pinot Noir grown there with more Burgundian structure and severity. Where California tends to heighten the ripeness of the fruit and to pump up the sugar levels, Oregon’s climate restrains the vines. The results are, at their best, remarkably balanced and sophisticated.

David Adelsheim’s portfolio of wines is made from fruit sourced entirely from the prestigious Willamette Valley. In addition to fine Chardonnay, the winery produces a stunning Pinot Gris. The stars, however, are the Reserve Series wines, which include Caitlin’s Reserve Chardonnay and Elizabeth’s Reserve Pinot Noir.

The owner of Pine Ridge Winery in Napa Valley, Gary Andrus, started this winery to produce handcrafted Pinot Noir in the Willamette Valley. The wines are intense, often spicy, and always richly layered.

This Carlton-based winery produces wonderful Chardonnay and Pinot Blanc, but its raison d’être is its extensive range of single-vineyard Pinot Noirs, which sell out quickly.

Although Washington makes some extraordinary Sauvignon Blanc, these fine whites have been largely eclipsed in the minds of the wine-buying public by the red wines produced from Bordeaux varietals. Led by Quilceda Creek and Leonetti Cellar, these lively, often powerful and well-balanced wines have received international acclaim, earning the state’s Columbia Valley a reputation as the Napa of the north.

Leonetti Cellar, founded in 1977 in the Walla Walla Valley, is all about red wine: Cabernet Sauvignon, Merlot, Cabernet Franc, Sangiovese, and, for blending purposes, a little Petit Verdot, Carmenere, and Syrah.

Quilceda Creek is often hailed as the finest producer of red wines in Washington, and deservedly so. Sourcing fruit from the region’s top vineyards, including the prodigious Champoux Vineyard, Quilceda employs state-of-the-art vinification techniques and ages its reds for 22 months in new French oak to achieve grand structure along with sensuous texture and flavors.