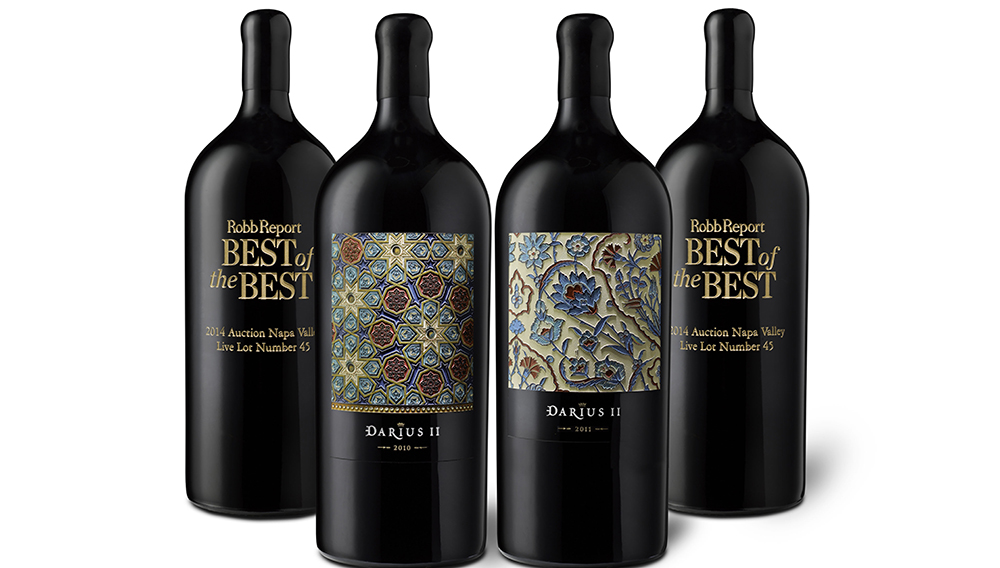 The annual Auction Napa Valley in Northern California’s famed wine country—taking place this year from June 5 through 7—has become one of the area’s most highly anticipated events and perhaps the world’s most distinguished affair combining wine and charity. Organized by the nonprofit Napa Valley Vintners association (which celebrates its 70th anniversary this year and recently welcomed its 500th member) in conjunction with local wineries, the auction has raised more than $120 million for local charities since it was first held in 1981. The auction takes places every year at the Meadowood Resort in St. Helena, with the surrounding events hosted by local wineries.

The auction lots up for grabs every year are put together by the wineries, many of which are family owned, along with local restaurants, international travel companies and retailers, and other organizations. Many of the items include decadent wine packages from some of California’s top labels, as well as over-the-top offerings ranging from bespoke jewelry to world-class travel itineraries. The proceeds from the purchased lots benefit a variety of local charitable organizations, including Planned Parenthood, Big Brothers Big Sisters of the North Bay, American Canyon Family Resource Center, Napa Emergency Women’s Services, and many others.

The main event during the three days is the live auction taking place Saturday, June 7, with 49 amazing lots being offered. Here we highlight our 10 favorite lots from this year’s auction, which will be posted daily to this page in the days leading up to this fun and generous event. (www.auctionnapavalley.org)

While all of the lots offered at Auction Napa Valley present extraordinary items and once-in-a-lifetime opportunities, we have unashamedly saved the best for last. For this year’s auction, Robb Report has partnered with the winemakers at Darioush, located in the heart of Napa Valley, to offer a smorgasbord of fine dining, exceptional wine, and truly unique experiences. This lot includes two 6-liter bottles of highly sought-after Darioush Cabernet Sauvignon (the 2010 and 2011 vintages), dinner for five with the winery’s owners at their Napa estate, five oceanfront nights for four people at Hawaii’s acclaimed Four Seasons Resort Maui at Wailea, and five more nights for as many people in overwater bungalows at the Four Seasons Resort Bora Bora (plus round-trip business-class airfare). Last but certainly not least, we proudly offer as part of this lot the opportunity for two people two serve as judges at Robb Report’s two most highly anticipated events of 2015: the Car of the Year and Culinary Masters competitions. Let the bidding begin!

Lot 36: Quintessa and the French Laundry

Over the past two decades, Napa Valley has become an epicenter of fine wine and dining. Thomas Keller’s revered restaurant the French Laundry in St. Helena and the nearby Quintessa winery on the famed Silverado Trail—both of which were founded 20 years ago—have certainly played a role in making Napa the destination it is today. In addition to a 10-year vertical of Quintessa magnum bottles of wine, the buyer of this lot will receive a dinner for 20 people at the French Laundry, hosted by Keller and Quintessa’s owners, Valeria and Agustin Huneeus, along with a select group of Napa’s viticulture elite—an experience sure to cultivate rare stories of Napa’s rise to oenological and culinary fame. The evening will conclude with a moonlit fete and dancing on a private-lake island and a stay in luxury tents at the Quintessa property.

Bill Harlan’s new Promontory winery, located in the previously untouched southwestern hills bordering Oakville, is perhaps one of California’s (if not the world’s) most highly anticipated new labels—and the buyer of this lot has the unique opportunity to become its first customer. Among the 125 total bottles offered in this lot are case No. 1 of the first 10 vintages, from 2009 to 2018 (all of which have yet to be released), as well as large-format bottles of the first five vintages. The lot also includes a two-night stay at Meadowood for five couples, VIP access to Promontory’s opening ceremony, and a private event at Promontory for as many as 30 people.

Fine wine and football are not as frequently paired as, say, cheap beer and football—unless Carmen Policy is involved. Policy, who owns the Casa Piena winery in Yountville, Calif., with his wife Gail, is also a former executive of the San Francisco 49ers football team. For this lot, in addition to two bottles of his revered Cabernet Sauvignon, Policy is offering a world-class, two-night trip to Napa and San Francisco in February 2016, for Super Bowl L, which will be held at the 49ers yet-to-be-built stadium in nearby Santa Clara.

Founded in 1970, Stag’s Leap Wine Cellars is among the oldest wineries in Napa Valley and among the few considered to be first-growth estates. This lot, which is a dream for any wine collector, includes the inaugural vintage of Stag’s Leap’s highly regarded Cask 23 estate-grown Cabernet Sauvignon, as well as every vintage it has released since then, for a total of 33 bottles. The lot’s buyer will also receive a private tasting for two of the 2013 vintage of Cask 23 with the winemaker Marcus Notaro, who will also host a dinner for 10 in the Stag’s Leap wine cave, plus VIP access to the grand opening of the winery’s new visitor center and a tour with its architect.

This lot from Colgin Cellars is simple but extravagant. It includes four jeroboams of Colgin’s famed 2004 vintages—a Cabernet Sauvignon, a Syrah, and two red blends—and a restaurant-takeover dinner for up to 50 people at either the French Laundry in Yountville, Calif., or Per Se in New York City paired with some of Colgin’s best vintages and bottles from the private cellar of the winery’s vintners, Ann Colgin and Joe Wender.

The list of producers whose items are included in this lot, which was put together by the Oakville Winegrowers association, reads like a laundry list of Napa Valley’s best wineries. Among the 35 bottles offered are wines from Far Niente, Harlan Estate, Opus One, and Screaming Eagle. Also part of the lot are a two-night stay for two couples at the Franciscan Estate, meals and tastings at various Oakville wineries, and a handcrafted wine-display case.

A 9-liter bottle of 2012 Cabernet Sauvignon from the Charles Krug Winery in St. Helena, Calif., three nights at the Savoy hotel in London, lunch and dinner with members of the Mondavi and Asscher families (of winemaking and diamond-industry fame, respectively), a private viewing of the Crown Jewels, and a McLaren driving excursion are certainly noteworthy elements of this lot, but they do not match its high point: an original 100-diamond Star of Africa pendant designed by Lita Asscher of the Royal Asscher diamond and jewelry company.

This package from Ovid Napa Valley includes a jeroboam of its highly sought-after 2010 red wine and a private dinner for eight people at the winery, prepared by chef Ryder Zetts of the nearby Archetype restaurant. But the highlight of this offering is a design for a new residence or a remodel of an existing residence or winery, conceived by Howard Backen of Backen, Gillam, and Kroeger Architects, who designed Meadowood. Backen’s involvement entails everything from early consultation and design to coding and zoning—virtually everything except construction.

Offered by Oakville’s Lokoya winery, this lot includes 16 bottles of Lokoya’s 2010 Cabernet Sauvignon from the label’s four appellations, as well as an extravagant eight-night trip through Australia’s wine country. Highlights of the trip include stays at the Four Seasons Hotel Sydney and Kangaroo Island’s Southern Ocean Lodge, a backstage tour of the Sydney Opera House, a helicopter tour of the Adelaide wine country, and multiple private winery tours and tastings.