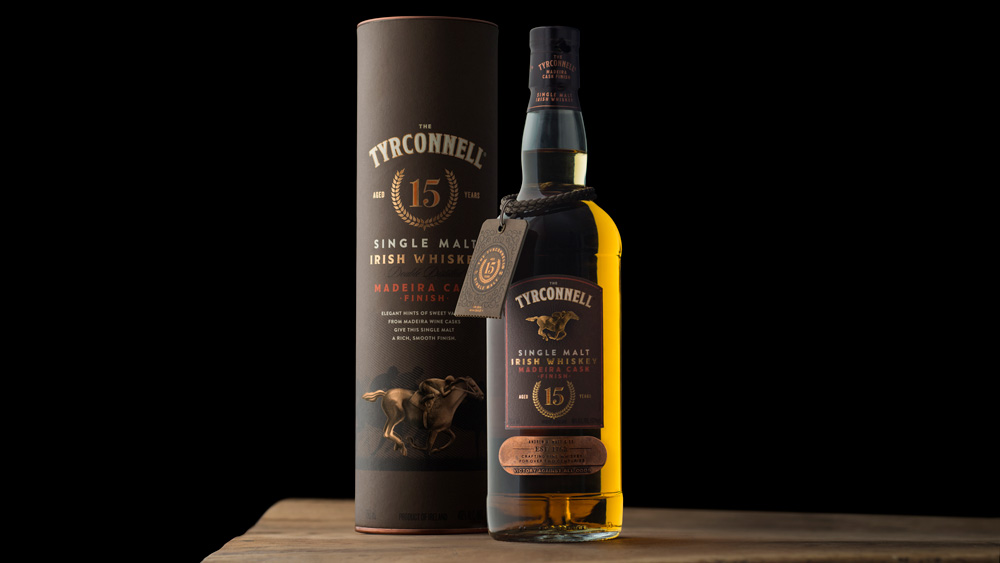 There is something to be said for witnessing an underdog come out on top. The victorious occasion latches onto the hearts of all who witness the win, like that of Irish distiller Andrew Alexander Watt in the year 1876. The esteemed National Produce Stakes Horse Race at the Curragh in County Kildare was rolling into its 10th year when R.M. Delamere decided to enter his chestnut colt, Tyrconnell, into the race. The staggering triumph of Tyrconnell that day—a thoroughbred that was considered to be a bit too short—left many aghast, but for Watt, it was an inspiration. He made a limited-edition, small-batch whiskey in honor of the racehorse and soon found himself with a best-selling Irish whiskey.

Since its revival by the Cooley Distillery in County Louth, The Tyrconnell brand has crafted several fine expressions, but has never released a cask-finished aged expression of this magnitude. The Tyrconnell 15 Year Old Madeira Cask Finish ($100) is the beginning of a revolution for Irish whiskey. Where their neighbors in Scotland have been maturing their whiskey in wine barrels for years, Ireland has just begun. Sitting at 92 proof, the whiskey is aged in American white-oak ex-bourbon barrels before being finished in Madeira wine casks from Portugal. The caramel-colored brew is produced in traditional pot stills and is also double distilled—rare for an Irish whiskey.

Without hesitation, the Tyrconnell hits the palate with a not-so-subtle oily bite, but the sharpness doesn’t last long. The sweetness from the Madeira casks takes charge and releases notes of vanilla and stone fruit, with a shocking surge of spice right at the end. Compared to other notable expressions like the Tyrconnell 16 Year Old, which leans more toward green apples and pears, the 15 Year Old Madeira Cask is a powerhouse of robust flavors topped with a hint of burnt orange.

Irish whiskey has itself been something of an underdog among the stars of scotch, Japanese whisky, and the incredible bourbons and ryes being produced in the U.S. But this bottle seems to be out in front of the pack by at least a nose.