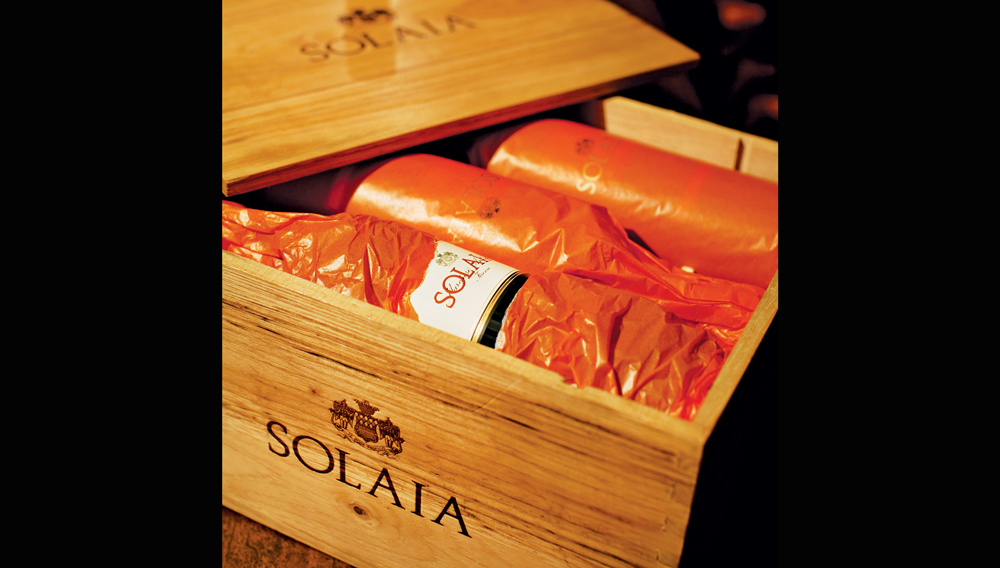 ❄ A five-day visit for four people to Florence and the Antinori family’s wine estates in Tuscany and Umbria, with travel by private helicopter and car from Florence to Tenuta Guado al Tasso in Bolgheri, Castello della Sala in Orvieto, and Tenuta Tignanello in Chianti Classico.

❄ Tastings of Marchesi Antinori’s signature wines at each estate and a meal prepared by a Michelin-starred chef in each region.

❄ Selection, in consultation with chief winemaker Renzo Cotarella, of a 225-liter barrel of a Cabernet Sauvignon/Cabernet Franc blend from the Solaia cellar at Tenuta Tignanello, to be custom bottled for the recipient.

❄ A private tour of Florence’s Uffizi Gallery, a visit to Marchesi Antinori’s stunning new Bargino winery in Chianti Classico, and a visit to the Abbey of Passignano to see the newly restored frescoes by the Renaissance master Domenico Ghirlandaio.

❄ A day in Siena, where the recipient and guests will attend the Palio di Siena horse race.

Winemakers since 1385, the Antinori family arguably represents the oldest of the old guard. Yet at the same time, the family’s members are the most visionary of iconoclasts. In 1971, for example, Marchese Piero Antinori rocked the Italian wine world by producing the first Super Tuscan when he rewrote Chianti Classico’s traditional formula by adding Cabernet Sauvignon and Cabernet Franc, rather than white varietals, to a base of Sangiovese. Aged in small French-oak barrels, this red wine created such a sensation that Chianti ultimately revised its own regulations. In 1985, Antinori’s young protégé, Renzo Cotarella—now the company’s CEO and chief winemaker—caused a similar stir by throwing out the rules for producing Orvieto Classico. His Cervaro della Sala blend of Chardonnay, tempered by the floral and acidic indigenous grape Grechetto, became the most-awarded white wine in Italy.

The recipient of this gift and three guests will have the opportunity to enter the unique inner circle of this venerable family. On arrival in Tuscany, the group will be lodged in the Imperial Suite of the five-star Villa Cora hotel, which overlooks the city of Florence, and on the first night will join Marchese Piero Antinori for a welcome dinner at the 13th-century Palazzo Antinori on the celebrated Via de’ Turnabuoni. During the dinner, which will be prepared by Michelin-starred chef Marco Stabile of Florence’s Ora d’Aria, the marchese will present the recipient with keys to the palace. The group will continue to delve into Tuscany’s cultural treasures, new and old, with a private tour of the Uffizi Gallery and a viewing of the frescoes of Domenico Ghirlandaio at the Abbey of Passignano, as well as visits to the Guado al Tasso estate in Bolgheri, Castello della Sala in Orvieto, and the sleekly styled Bargino winery in Chianti Classico.

After days of immersion in wine, architecture, and art, the group will arrive at the fabled Tignanello estate. There they will join Cotarella for a tasting in the cellar, where the recipient will personally select a 2015 barrel of a special, one-of-a-kind blend of Cabernet Sauvignon and Cabernet Franc from the Solaia Vineyard. As Cotarella points out, the tiny, 50-acre parcel—with its steep, rocky, southwestern-facing slopes and 1,300-foot elevation—is ideally suited to these varietals. The recipient will have the chance to get to know this matchless terroir intimately, as this gift also includes two bottles each of every vintage of Solaia from 1978 to 2013—a wine celebrated for its intense red fruit, deep floral notes, and distinct spiciness. On emerging from the cellar, the group will share a toast (or two) with members of the Antinori family during an intimate dinner at Tignanello prepared by the three-Michelin-star restaurant Enoteca Pinchiorri.

Attendance at the Palio di Siena, which is held on July 2, 2016, is contingent on the timing of the recipient’s visit; if the trip does not coincide with this event, another activity, such as an exclusive boating excursion, will be arranged. the Tour of the Uffizi gallery and the visit to the Abbey of Passignano are contingent on booking by January 31, 2016. Travel to and from Italy is not included.