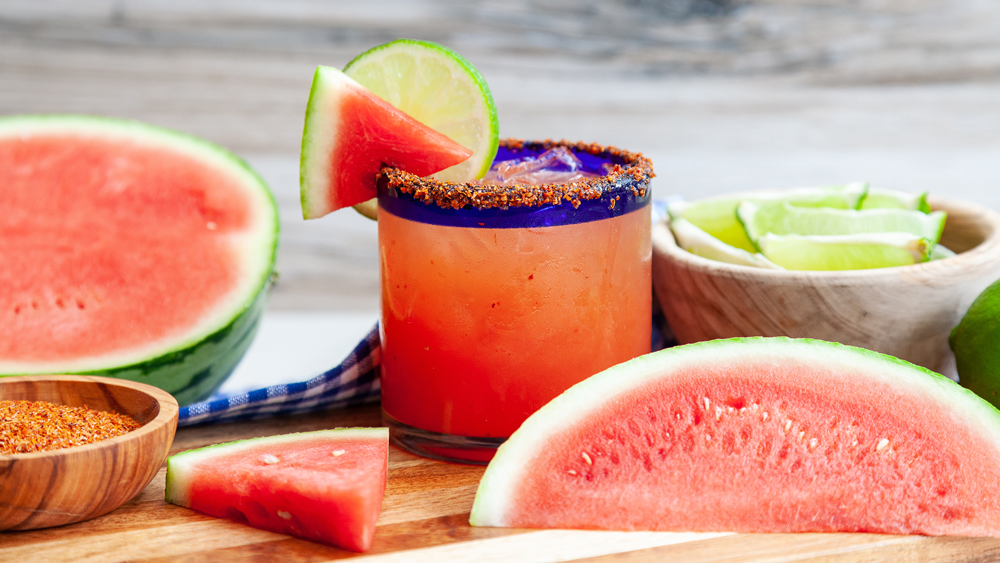 As far as dynamite warm-weather ensembles are concerned, a Watermelon Margarita is such a supergroup it could headline Lollapalooza. While there are more technically refreshing drinks—cocktails like the Mojito or the Eastside Rickey that recruit the cooling exhale of mint to bring the temperature down—there’s nothing quite so summery and indulgent as the combination of tequila, lime, watermelon and ice. Tequila, with its raw vegetal bite, is already mollified by the Margarita treatment, but add the juicy kiss of sweetness from a ripe watermelon and it becomes transportive: You’re suddenly barefoot on the grass, wide chip bowls on a red gingham tablecloth, the distant splashes and screams of happy children in a pool.

In an increasingly globalized world, where you can buy tomatoes in December and pomegranates in June and eleven different types of apples every day of the year, watermelons (along with their autumnal cousins, the noble pumpkin) are some of the few pieces of produce that remain almost aggressively seasonal. You could probably get a watermelon in the winter, but why would you? Nobody eats watermelon because they should. At 91 percent water it’s barely even food. You eat it because it feels right, a guiltless indulgence, the essence of summer itself made manifest. Mark Twain, in Pudd’nhead Wilson, refers to watermelon as “chief of this world’s luxuries.”

It’s also, mercifully, incredibly easy to work with in cocktails. Most recipes will call for just adding juice to an already balanced cocktail, which totally works, but there’s a few ways to think about how to make watermelon cocktails, depending on what you want. So I’ve broken down the recipe three different ways to help you find the version that’s best for you, but for each I suggest using a blanco tequila to make the brightest Margarita you can.

Instructions for all three recipes: Add all ingredients to a cocktail shaker, shake on ice for 6 to 10 seconds, strain onto fresh ice in a rocks glass and garnish with a lime wheel or a watermelon slice, or both.

The most straightforward way to add watermelon to your Margarita is also the easiest: Just take the cocktail and add watermelon juice to it. You don’t even need a juicer, just cut up some watermelon chucks and blend them, then strain out the solids. It’s clean and easy, and creates a deeply fruity, refreshing drink.

The downside of this is that it can add a little more sweetness and also thins it out a little. The experience of drinking cocktails is usually pretty snappy: Your standard Margarita will be between 15 to 18 percent alcohol once you’re done shaking it. Add an ounce of watermelon juice, and that drops to 11 to 12 percent, still stronger than a beer, but a noticeable attenuation. If you want something a little less robust and a little more accessible, this is the perfect method. If you prefer the traditional strength cocktails, perhaps you’d prefer another way.

To still get that watermelon flavor but have it come a little punchier, you can turn the watermelon juice into a syrup: Make the juice like described above and then combine it with an equal amount of sugar and stir until the sugar dissolves. You can use this watermelon syrup any time a recipe calls for simple syrup, making the cocktail summery but keeping it lean and tight, without adding excess liquid or sweetness. Watermelon Syrup will hold for about a week in the fridge. Turning it into a syrup helps extend the shelf life, but make sure to keep it cold. When it starts going bad, you’ll know by the smell.

The cleanest of the bunch and also the subtlest. Think cucumber water in a chain-hotel lobby. Watermelons are, as mentioned, mostly water, but infusions still take well: Cut up the watermelon into smallish cubes and combine with tequila in a sealed jar or covered bowl. The ratio will be a bout two parts tequila to one part watermelon. Let sit about 24 hours at room temperature, then strain out the solids. The tequila takes much of the flavor but not much of the color, so it’s a cool way to make a Watermelon Margarita that looks like a regular margarita, just with a fruity vibrancy at its core. It’ll last forever at room temperature. This trick also means you can make stirred cocktails, like Watermelon Negronis or Watermelon Sazeracs, which is a whole new level. Have fun.