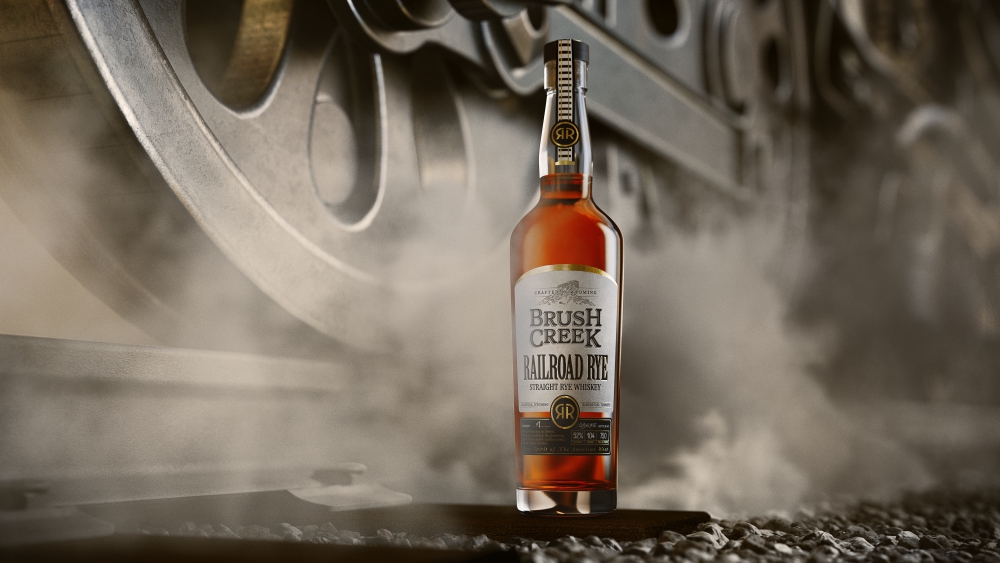 Sometimes it feels like the American whiskey industry is constantly looking for a new gimmick to help convince you to buy a particular bottle. And these days, that can mean transporting barrels of booze by ship, truck and now railroad to tell a story and, hopefully, actually affect the flavor… but it’s best to take all of this with a grain of salt.

Wyoming’s Brush Creek Distillery is trying to tell a specific story with its new Railroad Rye, but perhaps the tale is more exciting than the whiskey itself. This a decent bottle of rye, and for good reason—it was distilled at MGP in Indiana, a master producer in the category, from two different mash bills and was aged between four and six years. But then comes a healthy dose of the previously mentioned whiskey trend, this time steeped in Americana. Eighty barrels were loaded onto a boxcar that then traveled 1,200 miles over about 30 days from Chicago to the distillery in Wyoming, where they were further rested.

“This project was inspired by the pioneers ahead of us, and like them, we dream big and work tirelessly to push the boundaries in the spirits industry,” said Brush Creek managing director Andrew Wason in a statement. According to the brand, the point of this journey was to highlight the historical significance of the Utah Territory (which included the part of Wyoming where the distillery is located) and the new industries and work behind them that were a part of that time in American history. The distillery plans to make Railroad Rye an annual release, each with a different mash bill and proof.

This is all well and good, but the bottom line is that the press release claims that the whiskey was “forever transformed by the journey,” something that is really impossible to quantify. Presumably, the interaction between wood and whiskey was heightened during the admittedly short journey, which is the point of this whiskey transportation trend, and temperature and humidity inside the boxcar must have played a part as well. But despite this being a solid MGP rye whiskey, one can’t help but wonder if this particular trend is becoming more gimmick than guarantee.

Blame Jefferson’s, I guess. Its Ocean series launched in 2012 and has become a bestseller for the brand, so much so that a rye whiskey got the Ocean treatment this year. These barrels travel the world on a container ship for months at a time, changing hemispheres and undergoing extreme shifts in temperature and weather. Again, it’s difficult to say exactly how the whiskey’s character is altered and ultimately it’s sort of subjective, but there is some science behind it having to do with the expansion and contraction of the wood while the liquid is sloshing around.

There are others using the transportation maturation technique or similar methods, like Ireland’s Clare Island Whiskey. O.H. Ingram River Aged Whiskey doesn’t actually transport the liquid, but ages it in a floating barrelhouse on the Mississippi River. And now there’s even a celebrity brand—Brad Paisley’s American Highway Reserve Route 2 is a blend of Kentucky and Georgia bourbon that toured with the singer in 2021 in a “rolling rickhouse,” a cute term for a tractor trailer truck loaded up with barrels. So let’s raise a glass to innovation in the whiskey world, but remember that a good yarn has been a part of the equation for as long as bottles have been sold. Hopefully, someday we will get that NYC subway-aged rye whiskey that literally no one has been asking for.