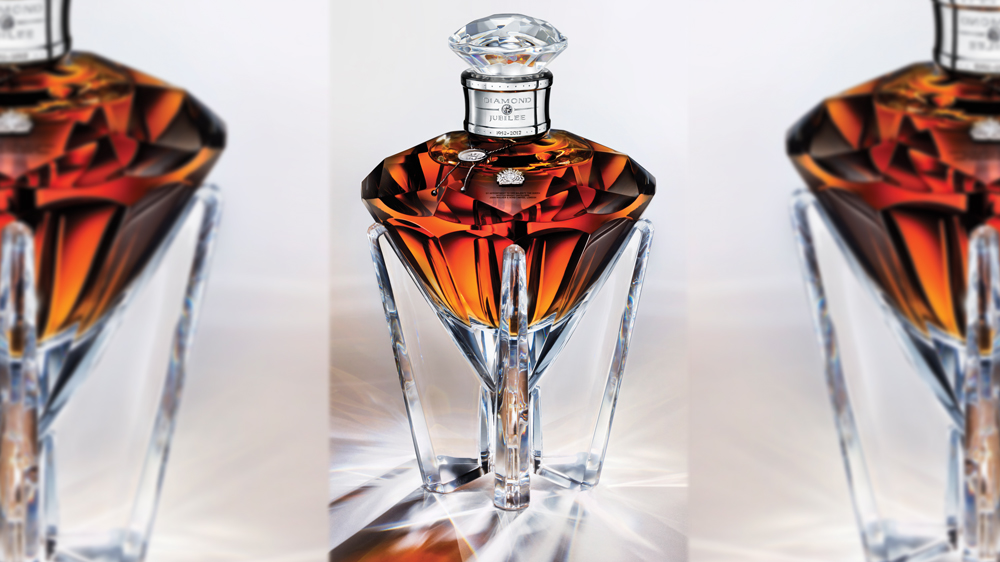 The spirits producers and purveyors that have united a kingdom across time.

By all accounts, Samuel “Mr. Sam” Bronfman was a shrewd and enterprising businessman who knew the value of promotion. After emigrating from his native Russia to Canada, and having acquired the Joseph Seagram’s distillery in Ontario, he seized upon the
1939 first Canadian visit of the United Kingdom’s royal couple, King George VI and Queen Elizabeth, to create a special blended whiskey to be put aboard their train. Years later, this whiskey became known as Crown Royal. Pleased with the publicity his royal gift had garnered, Bronfman decided to once again create a spirit for the monarchy, only this time it was to be a blended scotch to commemorate the coronation of Queen Elizabeth II.

Befitting its destiny, this whisky was christened Royal Salute. Composed of the rarest single malts from the cellars of Strathisla and created by master blender Charles Julian, it was unveiled on June 2, 1953, by Chivas Bros. (which had been acquired by Seagram’s in 1949 and had been granted its own royal warrant in 1843 by Queen Victoria) as an ultra-premium, 21-year-old blended scotch. Julian took inspiration for the age designation from Britain’s historic 21-gun maritime salute, although many of the whiskies in this blend continue to be much older than that, and this original blend in 1953 marked the only year Royal Salute could claim a royal warrant.

Presented in a porcelain flagon, the 21 Year Old—which is still available on a limited basis—was followed by other limited offerings under the Royal Salute banner, including a onetime release of Royal Salute 50 Year Old for Queen Elizabeth’s Golden Jubilee in 2002 and the spectacular $200,000 Tribute to Honour, consisting of 21 jewel-encrusted decanters containing whiskies 45 years and older.

Country: Scotland
Warrant issued: 1934 by King George V and renewed every year since, including in 2017 by Queen Elizabeth II

In keeping with the royal family’s recognition of premium Scotch whisky, Queen Victoria’s grandson, King George V, granted John Walker & Sons a royal warrant in 1934. Although numerous Johnnie Walker iterations have been introduced since then, including Gold, Platinum, and Blue Label whiskies, perhaps the distillery’s most spectacular tribute to the monarchy was the 60 limited-edition Diamond Jubilee decanters created in 2012 to honor Queen Elizabeth II’s 60th year on the throne. Priced at $156,000, each diamond-shaped Baccarat crystal decanter is supported by a base of six legs representing the decades of the queen’s reign. All of the whiskies used to create the exclusive blend were distilled in 1952, and the decanters feature ornamentation by the Scottish silversmiths Hamilton & Inches that includes a representation of the company’s original royal warrant.

“Not only is the decanter a magnificent piece of artwork,” says international whisky collector Mahesh Patel, founder of the Universal Whisky Experience and owner of two of the 60 decanters, “but I hear the whisky is amazing too, which I will find out soon when I open one of my decanters.”

In 1835, Royal Brackla became the first distillery to receive a royal warrant, which was granted by King William IV. His penchant for this Highland single malt, appropriately called “the King’s Own Whisky,” was shared by his niece, Queen Victoria. Until recently, most of Royal Brackla’s production was used in various Dewar’s blends, but its distinctively deep flavors are now available as single malts of various ages in limited bottlings. Today it is one of only two active distilleries—along with Royal Lochnagar—to legitimately use the word “Royal” in its name.

Fittingly, the whiskies used in the Johnnie Walker Diamond Jubilee blend were bottled at the Royal Lochnagar distillery, strategically located near the British royal family’s Balmoral estate. The distillery was honored with a royal warrant in 1848, after Queen Victoria visited the facility in September of that year. Nearly all production of the rich and flavorful single malt is used in Johnnie Walker Blue Label blends, and very little of it can be found outside the distillery.