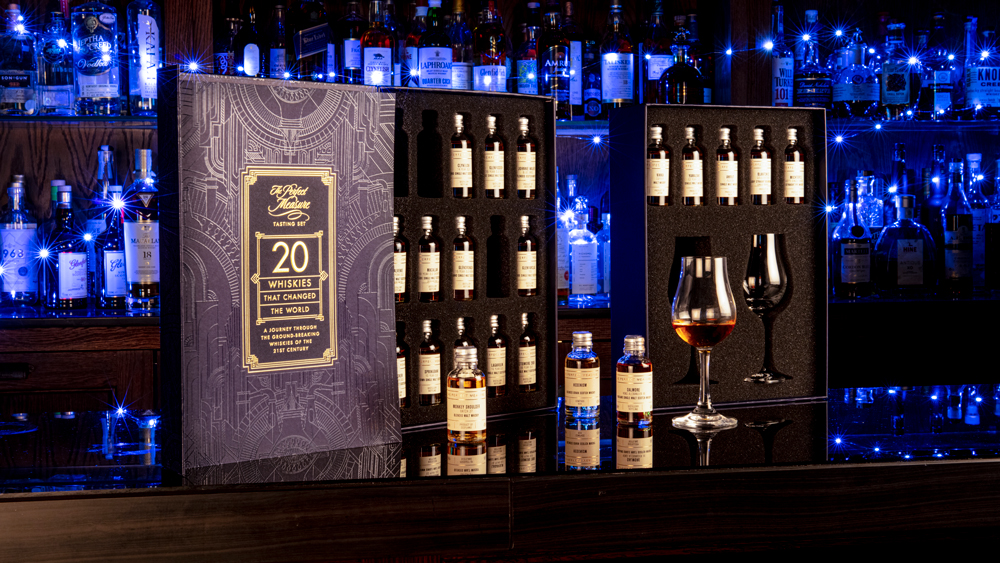 There are plenty of lists of the best and more important whiskies, some of the most insightful of which you’ll find in this very publication. But actually tracking down all the bottles in a given list can be a Herculean and frustrating task. Which is what makes The Whisky Exchange’s new package, 20 Whiskies That Changed The World, so groundbreaking in its own right. It’s not just a well thought out and beautifully written compendium of the biggest game-changers of the still-young 21st century, it’s a tasting kit of those very whiskies.

Compiled by Whisky Exchange founder Sukhinder Singh and annotated by ambassador and head of training Billy Abbott, the package, which was designed in-house, features 3 cl (about 1 oz.) samples of each whisky, a pair of glasses and a 52-page illustrated booklet which includes the background of each selection, tasting notes and an explanation of “Why We Chose This.” The package, which costs £160 (around $193), took about three years from conception to completion, starting with, of course, the list. Singh says, “I probably started with a list of maybe 30 to 35, and then we condensed them down to 20. We wanted to balance it between price, age, different types of casks, the education element, which were the important world whiskies. That’s the key—they all set the benchmarks, and everybody followed.”

The package is divided into four thematically arranged flights of five whiskies each, including cask finishes, world whiskies, peated malts and innovators. Singh and Abbott will be making videos to accompany both the flights and each individual whisky for a more formalized tasting experience, though Abbott emphasizes that “flexibility is the key word. You can do them individually, you can do them by flight, and if you really want to, you can sit down and do the whole lot as an endurance challenge… but I wouldn’t recommend it.”

A sampling of the whisky you’ll receive.  Photo: courtesy The Whisky Exchange

The world-changing whiskies are a wide-ranging mix, serving as an introduction to the category for newcomers as well as an opportunity for veteran drinkers to revisit some classics that may not have crossed their paths for a while. There are no serious obscurities or anything too far off the beaten path by 2021 standards, but it’s hard to criticize any of the 20 picks, which include seminal drams from Johnnie Walker Blue Label to Michter’s 10 Year Old Rye.

“You think they’re just standard malts which have been there forever, but it’s not true,” Singh says. “These whiskies, when they launched, actually inspired brand owners to say, ‘They’ve done a great job, we need to learn from that. Let’s do something different.’” Many of the picks were launched in the 20th century, but didn’t really make a splash until the 21st. One such expression is the Macallan’s 18 Year Old. “You talk about sherry casks, and Scotland, and you can’t talk about this style of whisky without them,” Abbott says. “They really created it as a modern style through the ‘90s into the 2000s, and now you see Macallans going for quite scary amounts of money. It’s all based on the quality and the reputation they’ve built up. They’ve also inspired other people, so if you look at distillers across Scotland who are using sherry casks, they’re using [Macallan] as the benchmark.”

The set is weighted heavily towards Scotch whiskies, which represent 15 out of the 20 selections. Some of it is due to extenuating circumstances—Irish distilleries, for example, refused to let The Whisky Exchange create small sample bottles. But for the most part, it was intended that way. “This is where it all started, in the UK,” Singh says. “I know because I was there at the beginning.”

Singh founded the London-based Whisky Exchange with his brother Rajbir in 1999 as an early ecommerce site (a physical store opened in 2006) and he’s as familiar with the whisky scene at the beginning of the millennium as he is with today’s market. In his opinion, it was the Scotch whiskies that were driving both innovation and quality until fairly recently. “I like to look long-term,” he says. “Take America, for example. I still think it’s early. There are so many good American whiskeys today—I didn’t find that five years ago.” Abbott adds, “America has a lot of great whiskeys, but half the time you don’t get to try them unless you know the distiller. I’d try something delicious and ask if they were doing exports, and they’d say, ‘We’re not even exporting to the next state. We’re barely exporting to the next town.’” The set does contain two American whiskeys, as well as two Japanese and one Indian expression.

The collection is an ongoing release, not a limited edition, so that’s one reason why they didn’t fill it full of rarities they’d have to replace on a regular basis (although the Macallan 18 and Blanton’s Gold bourbon can be difficult to find nowadays). And also, these whiskies are meant to be consumed and enjoyed, not hoarded. Abbott notes, “Often the rare [whiskies] aren’t the things which push things forward. So it’s the things that are still around, the things you can actually get,” that they focused on. He slyly adds, “If we did a ’20 Whiskies You’ll Gnaw Your Arm Off in Order to Try,’ then we could really do some fantastic things.”