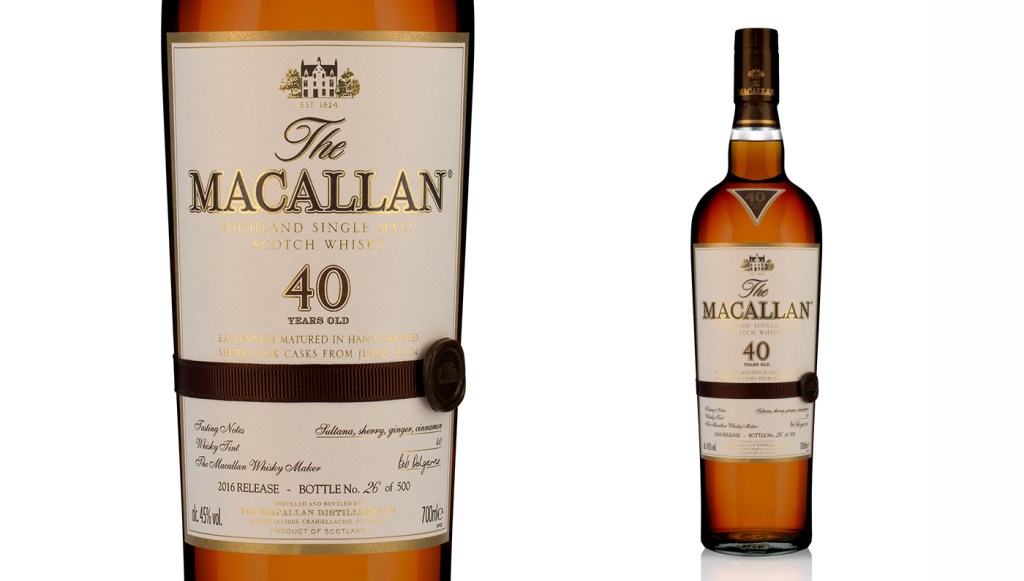 The Macallan’s limited release of a 40-year-old blended Scotch ($8,000) from its Sherry Oak line represents only the second time a non-vintage 40-year-old expression has been released in the entire history of this iconic distillery.

Five hundred bottles of the 40-year-old were created, each bearing an individual number and the signature of Bob Dalgarno, the Macallan’s master whisky maker. Its limited numbers—only 70 bottles have been allocated for the United States—and the story behind this whisky burnish its future as a must for a connoisseur’s collection.

The whisky almost didn’t get made. “Back in 2006, our distillery team was looking to create a 30-year-old expression for the Sherry Oak line,” says Charlie Whitfield, manager of brand education and prestige whisky for the Macallan. “After looking at a number of casks, they selected nine to make that 30-year-old. But Dalgarno had an instinct. He kept one cask behind and watched it. He found that at the age of 40, it was at perfect, peak maturity.”

The 40-year-old is a dark, autumnal russet in color, with rich flavors of dried fruit, ginger, chocolate, cinnamon, and gentle wood smoke—all amplified by decades of slumber in European oak sherry casks.

And, while it’s not the rarest release the Macallan has ever set free—the distillery recently released a 65-year-old that retailed for $35,000—it is absolutely a collector’s piece.

“In terms of what makes the Macallan unique,” Whitfield says, “the most important factor is the exceptional oak casks we use. We control the entire process from acorn to cask. Unlike a car that depreciates when you drive it off the lot, a whisky of this quality will rise at auction. Right now, it’s retailing for $8,000, but I wouldn’t be surprised to see it much higher on the block.”

Bottles are available through fine whisky retailers in New York, or you could sip a glass at the Hotel Bel-Air, Spago, or the Langham Huntington, Pasadena, in Los Angeles; the Venetian and Aria hotels in Las Vegas; or at the Boston Harbor Hotel in Boston. (themacallan.com)