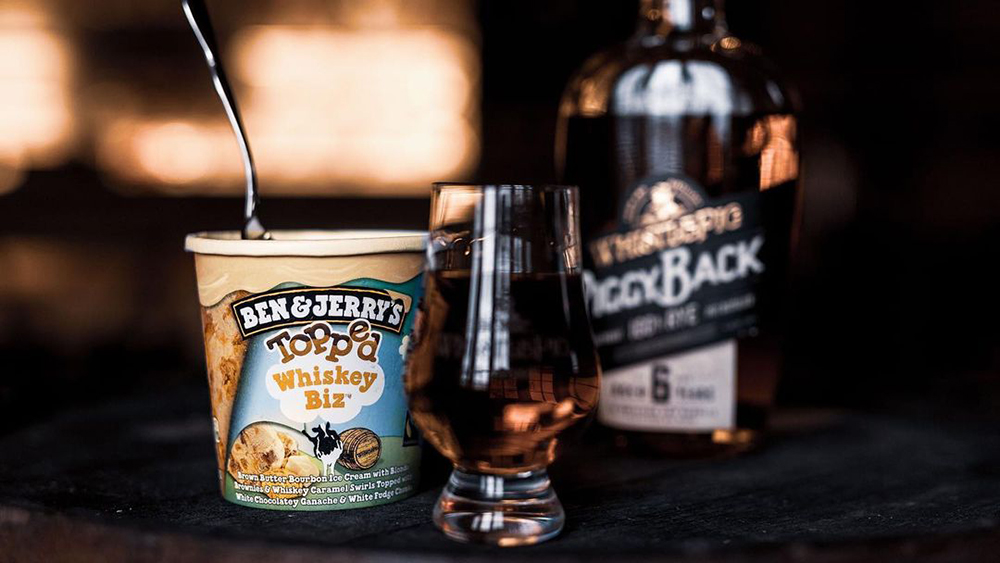 Whiskey and ice cream might not seem like the most natural pairing, but WhistlePig is vying to change all of that. The noted Vermont distillery has joined forces with state neighbors Ben & Jerry’s to create a new ice cream flavor called Whiskey Biz.

The distillery describes the spiked ice cream as “over-the-top” and the flavor profile certainly smacks of decadence. The brown butter bourbon base is jampacked with chunks of blonde brownies and then topped with white chocolate ganache and fudge pieces. WhistlePig’s award-winning PiggyBack Rye is cooked into caramel swirls that run throughout the ice cream.

The six-year-old PiggyBack Rye was one of the late great Dave Pickerell’s final creations. The master distiller, known as the “Johnny Appleseed of Whiskey,” died of heart failure in November 2018 but left behind an incredible legacy, including this 96.56 proof rye.

The flavorful expression packs cinnamon, black peppercorn and grapefruit zest on the nose, with notes of dark chocolate, ginger and spice courtesy of the rye. The finish, meanwhile, offers hints of oak and caramel. Needless to say, the spirit surely marries well with gooey caramel.

The whiskey ice cream is one of seven new flavors in B&J’s new “Topped” line. As the moniker implies, all of the ice creams are topped with a semi-soft layer of ganache. The six remaining flavors run the gamut, from Chocolate Caramel Cookie Dough and PB Over the Top to Thick Mint and Tiramisu.

Since both Ben & Jerry’s and WhistlePig hail from the Green Mountain State, the collab was a natural fit.

“We’re lucky to have incredibly innovative neighbors like Ben & Jerry’s who love to collaborate as much as we do,” the distillery shared on Instagram. (A spokesperson for the brand told Robb Report that a formal announcement regarding the partnership would come in the next few weeks.)

What’s more, WhistlePig recently announced an international partnership with Moët Hennessy and is no doubt working on ways to increase its global reach.

The WhistlePig pint is available now nationwide for around $5. Alternatively, if you want to taste the whiskey sans the calories that come with brownies and ganache, the PiggyBack Rye can be picked up for just $50 a pop.

In addition, the distillery recently dropped a bold new expression known as The Boss Hog: The Samurai Scientist ($570). Inspired by Jōkichi Takamine, it’s the first American whiskey to be finished in Japanese umeshu barrels and was special enough to land a spot on our recent must-try list. Just don’t spoil that drop with ice cream.