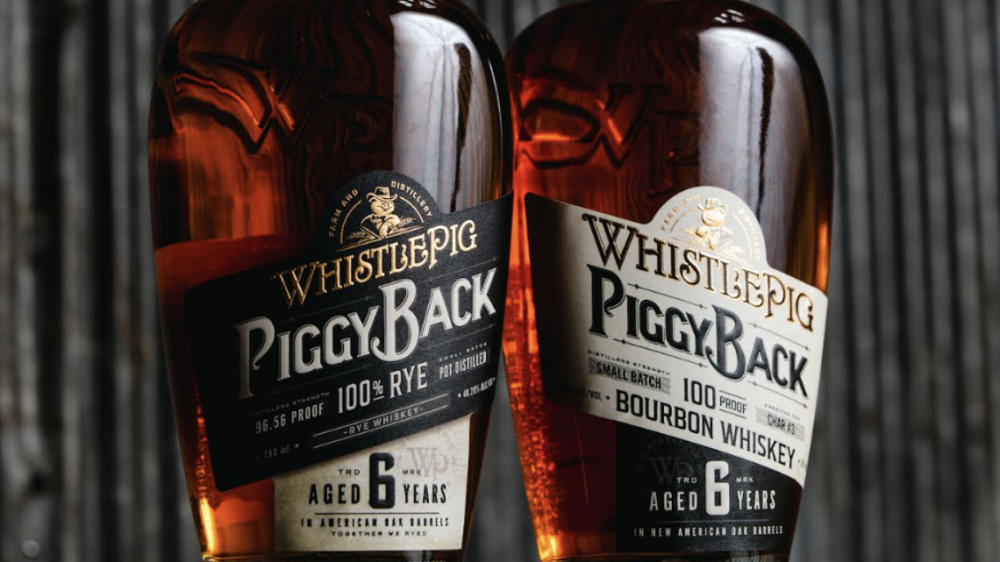 WhistlePig is famous for its high-end ryes, but it seems the team is itching to stretch its whiskey wings a bit, and has been experimenting with a limited number of bourbon releases—the latest of which is the new PiggyBack 100 Proof Bourbon.

A few years ago, WhistlePig released PiggyBack 100% Rye, a six-year-old rye whiskey that was younger and cheaper than its core lineup. PiggyBack also happened to be the last rye whiskey that esteemed distiller Dave Pickerell worked on with WhistlePig before his passing. That release was meant to be used by bartenders for mixing up cocktails, although it drinks perfectly fine on its own, and the new PiggyBack Bourbon has sense of purpose. First of all, at 100 proof this is a whiskey that can stand up to being combined with other ingredients and won’t get lost in the mix. The exact mash bill isn’t given, just that the corn component (remember, bourbon must be made from a minimum of 51 percent corn) is extremely high and there’s a bit of rye grain in the mix for flavoring. It’s aged in char number three barrels for a minimum of six years, which puts it in the range of other bourbons like Wild Turkey or Heaven Hill’s Green Label. And the whiskey itself is “distilled in Vermont at the WhistlePig Farm, as well as with other partners in order to bring unique character to the whiskey,” according to a rep for the brand.

“The whiskey world doesn’t need another traditional bourbon, and to be true to WhistlePig, we had to bring something new to the category,” said head blender Meghan Ireland in a press release. “Most big bourbon brands are pretty quiet about their mash bills and the exact age of their whiskey. At WhistlePig, we’re proud to push both to the limit. With a corn-rye-barley trifecta, six years of age and 100 proof, PiggyBack 100 Proof Bourbon stands taller and bolder than the pack.”

To be fair, the age and proof aren’t exactly groundbreaking, given the fact that there are some bottled-in-bond bourbons out there with similar stats at a comparable price point, but clearly WhistlePig is trying to push this new whiskey hard, particularly given its reputation as a rye whiskey producer. Tasting notes from the distillery include caramel corn and oak on the nose, followed by maple and vanilla on the palate, with a hint of honey on the finish. PiggyBack Bourbon will be available in 15 states this year, or you can purchase a bottle for $49.99 directly from the WhistlePig web store.