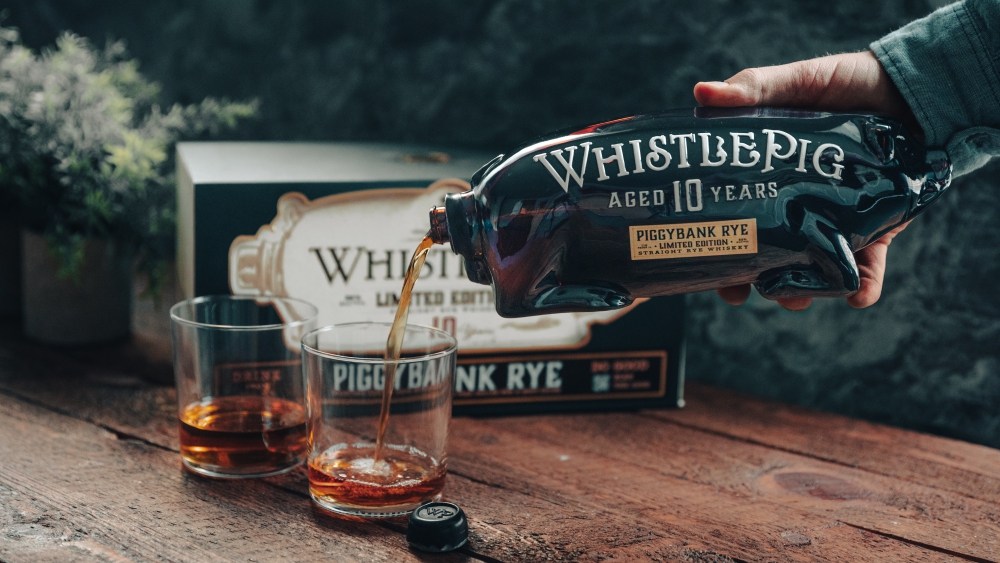 Fans of WhistlePig whiskey know the origin story of the name, which actually refers to a groundhog based on the high-pitched warning sound it makes. But for those hooked on the porcine connotation of the name, the distillery team sees you and has released a new limited-edition PiggyBank Rye which pours directly from the pork posterior.

The WhistlePig PiggyBank bottle is modeled after the Berkshire Bitter Pig decanters that were manufactured in Cincinnati, Ohio in the late 19th century. Each bottle contains 10-year-old rye whiskey sourced from Canada, as opposed to the younger whiskey that is actually being distilled onsite at the Vermont farm and distillery. It’s bottled at 110 proof and in a bigger one liter size instead of the usual 750 ml. This glass piggy really has an antique look to it, but the whiskey inside will be familiar to fans of this premium rye brand.

This playful release is part of the distillery’s spirit of experimentation of recent years, according to CEO Jeff Kozak. “We’ve broken ground on nine rye grain and experimental crop fields across 500 acres in Vermont, fermented yeast foraged from a ham’s hind, delivered the Great Beer Rescue, countless epic finishes, and even a whiskey fueled car,” he said in a statement. And Liz Rhoades, WhistlePig whiskey scientist, envisions more to come in the future. “This is the story of the next decade of WhistlePig,” she said, “one that will bring new frontiers beyond rye, even bigger age statements, stupendous complexity and undoubtedly more pig hijinks. There’s no better way to mark the occasion than with an incredibly delicious whiskey that arrives from behind.”

There have been a slew of new WhistlePig releases over the past few months that have pushed the boundaries of rye whiskey, including the latest edition of the ultra-premium Boss Hog, the SmokeStock collaboration with Traeger Grills and the new country music star-endorsed single-barrel PiggyBack Legends Series: Brothers Osborne Barrel. Despite the boar-shaped bottle, PiggyBank is more along the lines of classic WhistlePig rye. It is available now at select liquor stores around the country (SRP $199.99), so stick your snout in the shelves and start scrounging around to see if you get lucky.