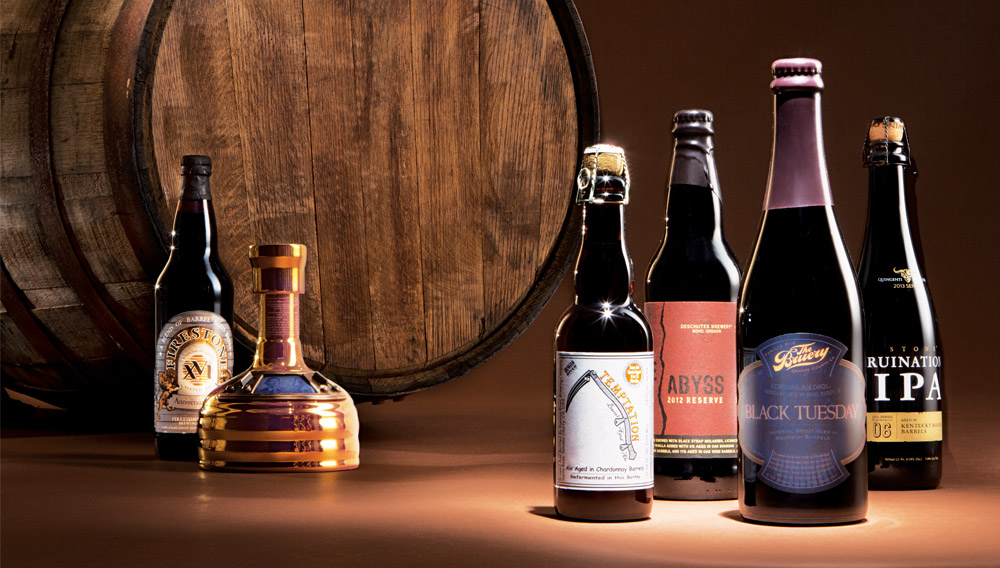 At the Judgment of Paris in 1976, a bottle of Chardonnay from the Napa Valley’s Chateau Montelena Winery famously defeated its French competition, opening the world’s eyes (and palates) to California wine. U.S. craft beer has not made such a dramatic entrance onto the world stage, but like California wine, which is not subject to regulations such as those of France’s Appellation d’origine contrôlée system, its emergence has been aided by the relative lawlessness surrounding its production in this country. Compared to Belgium, Germany, and other European countries where strict guidelines control the breweries, the United States is the Wild West of beer making.

Without stringent regulations, U.S. craft breweries—which the 72-year-old Brewers Association defines as primarily independent companies that produce fewer than six million barrels of beer per year—are free to experiment with old- and new-world techniques. In the last 20 years they have even invented several production methods that established European breweries are adopting. For example, the roughly 500-year-old German beer industry’s purity law, or Reinheitsgebot, was recently reinterpreted to allow for dry hopping—the method of adding hops to the beer after the wort has cooled. The method was originally developed in Europe, but it was revived in the United States.

In the 1990s, U.S. breweries resuscitated Europe’s ancient practice of aging beer in oak barrels. This technique was abandoned during the Industrial Revolution, when metal vats became the standard vessels for fermentation. Now what was once a necessity of the craft has become an art form, and U.S. breweries are making more varieties of beer using oak barrels than their European counterparts ever did, and they are doing so with a truly American sense of exploration. These experiments range from strong ales aged in new oak and second-fill bourbon casks to sour beers fermented with various strains of wild yeast, including Brettanomyces, and aged in old wine barrels.

Jim Koch, a cofounder and the brewer of the Boston Beer Company, which owns the Samuel Adams brand, was among the first U.S. brewers to revive this practice. “Aging beer in used spirits barrels seemed like an obvious, unique thing to do, and we were surprised that no one else was doing it,” he says. In 1994, the company released Samuel Adams’s Triple Bock (now out of production); it was one of the first barrel-aged production beers bottled in the United States in at least a generation. The Triple Bock was aged in casks from the Jack Daniel’s distillery that previously contained bourbon. “This type of aging imparts flavors to the finished product that you can’t get from normal fermentation,” Koch says.

In 2009, Samuel Adams launched its Barrel Room Collection, an assortment of beers blended with a Belgian-style ale that ages in Hungarian oak tuns. Among Samuel Adams’s barrel-aged beers is the annually released Utopias. Priced at $200 per 24-ounce bottle, it has an alcohol percentage above 20 and no carbonation, and drinks more like a cordial than a beer. The company produces Utopias and its other barrel-aged beers in minuscule quantities compared to its flagship Boston Lager. But while the brand has achieved considerable popularity in the last two decades, Koch says that all craft beer, including Boston Lager, accounts for only 7 percent of the U.S. market. Beers produced by Anheuser-Busch InBev (Budweiser, Corona, Stella Artois, and many others) and MillerCoors account for most of the remaining 93 percent. But Koch and brewers for other, smaller brands are hopeful that the popularity of full-flavored artisanal beers will continue to grow.

(Continued on next page…)

When Koch—a clean-shaven 64-year-old—founded his company in 1984, fewer than 100 breweries were operating in the United States. By the mid-1990s, that number had increased to about 1,500. Today there are some 2,500 breweries in the country. After Samuel Adams, the largest craft brands include Deschutes and Rogue Ales, both located in Oregon, and New Belgium in Fort Collins, Colo. Each of these three companies offers a limited number of barrel-aged beers.

In addition to the rise of Samuel Adams and Goose Island, the craft-beer boom of the 1990s included the openings of Allagash in Portland, Maine; Dogfish Head in Milton, Del.; Stone in San Diego; and Firestone Walker in Paso Robles, Calif., all of which remain relatively boutique-sized breweries and produce a variety of barrel-aged beer.

“I think one of the reasons why this industry has been so successful in applying experimentation is that we’re so willing to share amongst each other that the learning curve is accelerated,” says Matt Brynildson, the brewer at Firestone Walker, which was founded in 1996. “That just doesn’t happen in, for instance, the German brewing world. Those guys don’t share information.”

Beers from Firestone Walker, which last year opened a facility called Barrelworks to age beers fermented with wild yeast and other microflora, have won significant international praise in recent years. Among other accolades, the brewery has been named the World Beer Cup Champion for a midsize brewery four times.

Because of Firestone Walker’s location in central California, Brynildson and the brewery’s founders, Adam Firestone (whose family established the nearby Firestone Vineyard) and David Walker, have cultivated relationships with a number of the area’s winemakers. For the past eight years, Firestone Walker has held a friendly blending competition in which local winemakers blend the brewery’s beers. The group then conducts a blind tasting of all the blends, and the winning blend is bottled and sold. In November, Firestone Walker released its XVII Anniversary Ale, a blend from the winemakers at Tablas Creek Vineyard. (The XV and XVI Anniversary Ales were blends from the winemakers at Saxum Vineyards.) Brynildson, who is in his early 40s and sports a pointy beard, says that the XVII blend is dark, rich, and complex and includes notes of chocolate and toasted coconut balanced by spicy and malty flavors. He also says that the beer will age well in the bottle.

Regarding cellaring barrel-aged beers, Brynildson says, “The rules are just like wine. With the spirits-barrel-aged beers, you start getting a lot of those cherry type of oxidized notes as the beer ages. If you like that, then the longer you wait, the better. With the sour beers, you’ll get leaner notes with more acidity. Beers that undergo a secondary fermentation with Brettanomyces are probably the best ones to age for long periods of time.”

Beers from Russian River Brewing in California’s Sonoma wine country and the Bruery in Southern California, both boutique operations, have become so popular that they have generated demand similar to that for rare wine. Every year when Russian River releases its Pliny the Younger, a hugely hopped triple IPA (another U.S. invention), people hoping to get a taste form lines around the block in downtown Santa Rosa. The Bruery’s Black Tuesday, a thick, syrupy imperial stout aged in bourbon barrels for more than a year, retails for about $30 per 750 mL bottle, but bottles have sold at fine-wine auctions for as much as eight times that amount. These examples suggest that when it comes to acquiring the best craft beers, the rules also are just like those for wine.

This well-balanced tripel-style golden ale exhibits a dense, foamy head that dissipates quickly. The nose offers delicate notes of wheatgrass and lavender and rich aromas of Belgian yeast. A smooth body of oak and bourbon accompanies flavors of coconut, vanilla, and grilled pineapple. (11% ABV; about $20 per 750 mL)

A blend of heavy, malty beers aged in a variety of Scotch-whisky barrels, this complex amber-colored beer offers a nose of peat, oak, and dark berries. Barley-wine-like flavors of sweet raisins give way to notes of caramel and smoke. (12.5% ABV; about $18 per 500 mL)

The nose of this rich porter displays malty characteristics, with notes that include ripe plums, tart blackberries, and mocha. Dates and figs are among the fruits revealed on the palate. The beer also offers plenty of oak and bourbon notes and a finish of chocolate-covered raisins. (11.3% ABV; $15 per 22 oz.)

This smooth, creamy oatmeal stout offers scents of vanilla and cream soda and hints of mocha. The cornucopia of flavors is extremely well balanced and includes notes of chocolate malt, cocoa powder, and espresso, along with traces of oak and toasted vanilla beans. (8.5% ABV; $17 per 22 oz.)

This English-style barley wine is thick and syrupy and offers big bourbon and malty notes. Sweet alcohol vapors are accompanied by scents of freshly baked bread and dark chocolate. Toasted coconut, ripe black currants, and raisins are among the deep, rich flavors. (13% ABV; $17 per 22 oz.)

As a result of resting in bourbon barrels for nearly two years, this thick and dark barley wine is replete with notes of vanilla, caramel, and oak, and there is a hint of tannins. A healthy amount of bittering hops helps balance the malty body. (11% ABV; about $25 per 500 mL)

Aged with cocoa nibs and vanilla beans in bourbon barrels for nearly a year, this wheat-based barley wine is thick and rich, but it is light in color and has a Champagne-like sprightliness. The nose is filled with tropical fruit and tart Belgian yeast. Flavors include honey and vanilla and a white-chocolate finish. (14.75% ABV; $30 per 750 mL)

This deep and rich barley wine has a surprisingly bright feel on the mouth—like cream soda—delicate tart notes, and orange zest contrasting with aromas of toasted nuts. Creamy oak flavors across the palate balance tastes of caramel, brown sugar, and molasses. (12% ABV; $13 per 750 mL)

This Burgundy-colored sour ale is aged for as long as eight months with black currants in Cabernet Sauvignon barrels. Brettanomyces yeast infuses the beer with tannins, aromas of sour cherries, and flavors of candied apples and tart plums. (10% ABV; $12 per 375 mL)

This Belgian-style brown ale is aged with Michigan cherries and Brettanomyces yeast in French Cabernet Sauvignon barrels. It offers aromas of tart cherries and raspberry jam and flavors of sour apple and grape followed by notes of toasted almonds and sweet bread. (7.1% ABV; about $18

A blend that includes beer aged in Hungarian oak tuns, this lambic-style ale offers scents of cherry pie and hints of lemongrass and Belgian yeast. The complex flavor includes dark cherry and vanilla and crisp, cider-like notes. (7% ABV; about $11 per 750 mL)

This copper-colored ale is composed of five beers that are aged in either bourbon or wine barrels and fermented with a variety of wild yeast strains. Oak notes help balance aromas of citrus and honey with flavors of apple and apricot, resulting in a delicate tartness. (9.6% ABV; $15 per 375 mL)

An homage to Flanders-style red beers, this bronze-colored treat is fermented using lager yeast, giving it a cider-like character. Hints of toffee and pepper balance the tart scents. Flavors include candied green apple and a touch of oak. (7% ABV; $17 per 22 oz.)

This sour blonde ale is aged from 9 to 15 months with Brettanomyces in Chardonnay barrels. The nose features Champagne-like scents of green apple and ripe lemons. The crisp flavors include dried apricot and a long, tart finish. (7.5% ABV; $12 per 375 mL)

Bold but smooth, this imperial stout is complex and well balanced. The nose is filled with oak and toffee, and the beer’s silken viscosity coats the palate with flavors that include sweet bourbon, cocoa powder, and a pleasant chalkiness. This beer is deceptively easy to drink. (11% ABV; $30 per 22 oz.)

Having aged in bourbon barrels for more than a year, this imperial stout is dark, rich, and infinitely complex. The nose immediately reveals the beer’s high alcohol content. The robust flavor includes caramel, vanilla, toasted

This quintessential U.S.-style IPA spends 16 months in oak barrels, which gives it a wealth of depth and complexity. The nose is filled with bright floral notes and vanilla and nutty aromas. Bittering hops balance the malty, creamy body. Flavors include honey and charred oak and a hint of peat. (7.8% ABV; about $17 per 500 mL)