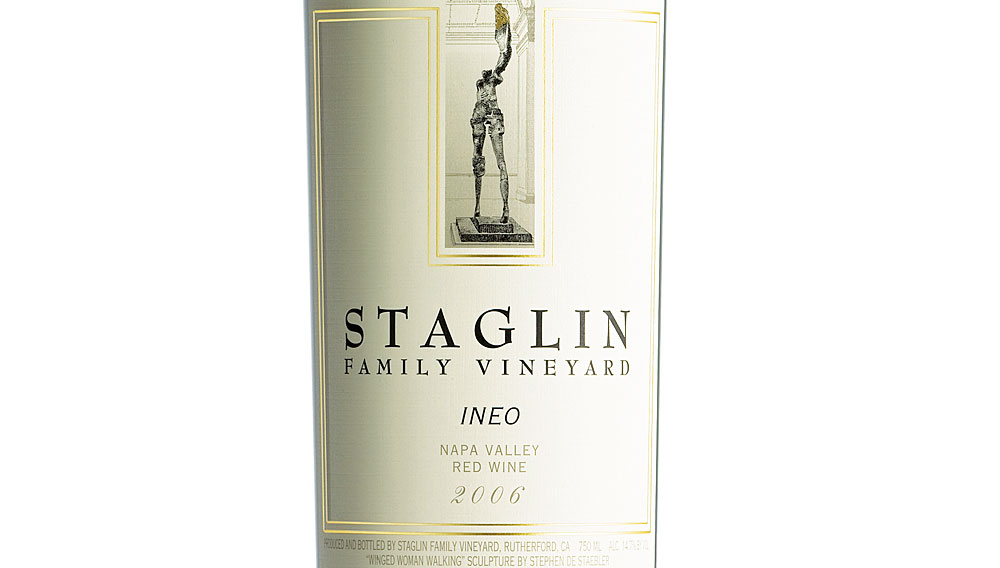 Life’s greatest gifts are often those that are least expected. The birth of a grandchild is such a blessing, as Garen and Shari Staglin, proprietors of Staglin Family Vineyard in Rutherford, Calif., discovered in 2006. The grandchild in question, however, was not theirs, but rather that of Michel Rolland, the renowned French enologist and the Staglins’ longtime friend. Rolland asked the couple to produce some large format bottles of a new wine to commemorate the birth.

“At the time that Michel approached us, this idea of a large format bottle coincided with a couple of other developments,” recalls Garen Staglin. “As part of our allocation of Chardonnay from Hyde Vineyards, we were also offered the opportunity to buy some great Merlot. And our vineyard manager, David Abreu, who has always been a big fan of Cabernet Franc, was having incredible success with that grape on our estate vineyard. And so the concept of making our first Bordeaux-style blend began to shape.”

Those familiar with Napa Valley’s most sought-after cult wines know that the Staglins have built a reputation for first-growth-quality prestige wines through their meticulously crafted Chardonnay and Cabernet Sauvignon, which have earned high scores and become the envy of collectors worldwide since the couple acquired their first vineyard in the mid-1980s. Their ambition to make wine, however, took root much earlier. “Growing up in an Italian family,” says Garen, “I started to enjoy wine at a very early age, and that passion continued throughout my life into my days at Stanford [Graduate] Business School in the late 1960s.” He met Shari during his undergraduate years at UCLA, and, after marrying in 1968 and then traveling for several years, the couple settled in Northern California in 1975. “Shari and I began visiting Napa when there were only five or six wineries there, and we looked at each other and said, “This is one of the greatest places on the planet. Wouldn’t it be great if someday we could move here and make wine?”

In 1982, after selling a company for which they had raised the venture capital, the Staglins found themselves suddenly in the financial position to make this long-held dream a reality. “I quit my job and began looking pretty much full-time for property in 1983,” says Shari. “After several disappointments, we finally decided to focus on a property in the Rutherford Bench. We were told that no one ever sells anything there, but we just started knocking on doors.”

A door opened, and the Staglins finally closed on their 62-acre estate in December 1985. Since that time, they have replanted the property and refined their lively Chardonnay and deeply expressive Cabernet Sauvignon with the aid of Michel Rolland; one of their first winemakers, Andy Erickson; and current winemaker Fredrik Johansson. “A Bordeaux-style wine was never really part of our plan when we started,” says Shari. “But after Michel’s request, we decided to do this very limited special edition.”

Because this wine was made to celebrate a new life, the Staglins’ son, Brandon, the winery’s marketing communications director, named it Ineo—a form of the Latin words for to begin. Yet the release also marks the beginning of a new style for the Staglin label. “The blend is 46 percent Cabernet Sauvignon, 36 percent Cabernet Franc, and 18 percent Merlot,” says Johansson. “So it’s quite different from our Cabernet, which is powerful and structured. Ineo has power, but its Cabernet Franc and Merlot components also make it elegant, pretty, silky, and balanced.”

Like Château Ausone, the wine has a mesmerizing kinetic quality in the glass, leading the senses through a rhapsodic repertoire of aromas and flavors that include blueberry, boysenberry, violet, coffee, and fresh peppermint on the lengthy finish. “The wine is complex but also has intensity and tenacity,” says Garen. “It has that enduring characteristic on the finish that shows its tremendous aging potential.”