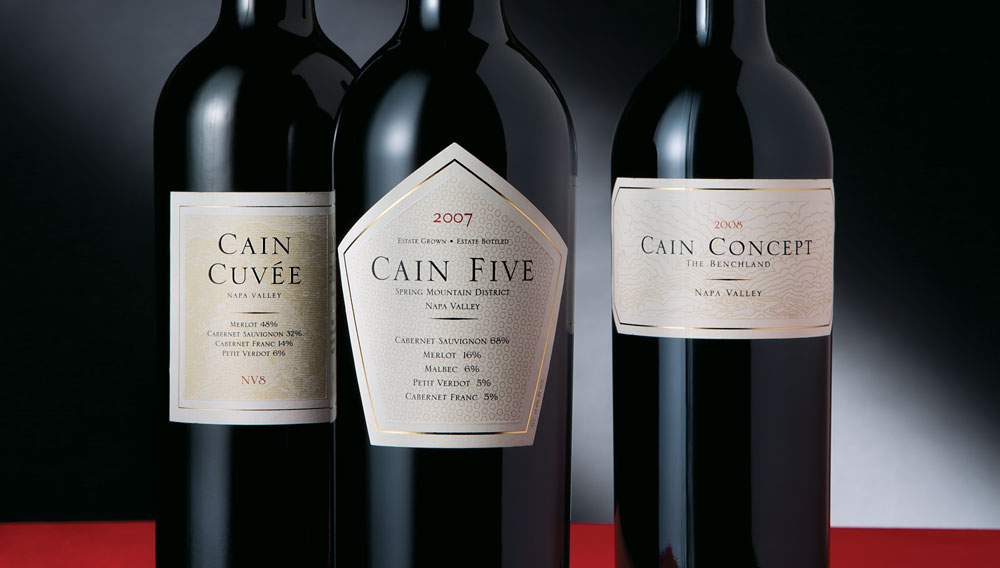 In 1980, Joyce and Jerry Cain encountered destiny at the terminus of a dead-end road. Like many others who had become enamored with the Napa Valley in the wake of the touted 1976 Paris blind tasting, the couple had been searching for a vineyard property; unlike most, however, the Cains gravitated not to the fertile valley floors but to 550 craggy acres atop Spring Mountain with elevations as high as 2,100 feet.

“It’s not the sort of place that people just happen to drive by,” observes Chris Howell, winemaker and general manager of Cain Vineyard and Winery. Originally part of the McCormick Ranch, the land was used primarily for raising sheep until the 1970s; yet the Cains envisioned its impossibly steep slopes terraced with all five Bordeaux vines: Cabernet Sauvignon, Merlot, Cabernet Franc, Malbec, and Petit Verdot.

“The idea of blending was only then coming back to the Napa Valley,” says Howell. The new label’s flagship wine, Cain Five, introduced with the 1985 vintage, pursued a philosophy similar to that which informed other Napa Valley blends, such as Opus One, Dominus, and Phelps Insignia, but Cain was among the first producers to use all five red Bordeaux grapes.

When Howell was recruited in 1990 by the Cains’ partners, Nancy and Jim Meadlock, to join the project, he pressed for two critical changes. Trained at the School of Agronomy in Montpellier, France, he understood the virtue of wines that express a specific terroir. “My thought was that this wine really has to be about place,” he recalls, “because Cain Five was not originally an estate-based wine.” Yet his second recommendation involved a significant disruption of the very place he sought to express. The vineyards had been planted onto rootstock, which is notoriously susceptible to phylloxera. Howell urged replanting of all developed acres, and the Meadlocks, who became the sole owners in 1991, acquiesced.

This long-term undertaking, which began in 1995, furnished at least one short-term benefit. The fruit from the replanted vines was replaced in the blend by grapes primarily from the benches of the Rutherford and Oakville regions, and in the 1997 vintage, the riper style of these lower elevations inspired Howell and his team to produce another wine, Cain Con­cept, to highlight the character of these vineyards’ warmer climate and alluvial soils. The current release, Cain Concept 2008 ($60), is redolent of boysenberry, cherry, cinnamon, nutmeg, and coffee, and its satiny tannins gently envelop the palate.

Another of Howell’s additions to the portfolio, Cain Cuvée, enabled him to experiment with blending lots not just from different vineyards but also from multiple vintages. The most recent example, Cain Cuvée NV8 ($34), comprises wines from the 2006, 2007, and 2008 vintages to yield a supple yet vivacious red with notes of cherry cider, red currant, and orange pekoe tea.

With the release of the Cain Five 2007 ($100), however, Howell’s two initial objectives—to replant the vineyards and to produce a 100 percent estate-grown blend—were at last realized. “The 2007 vintage is really the first estate Cain Five since 1994. I made five vintages solely from the property, and then we went through the phase of replanting the vineyard and working our way back to the estate.”

The mountain location is palpably articulated in this dark crimson blend, whose intense bouquet pierces the senses with powerful yet bosky perfumes of fir tree, manzanita, mushroom, and wild herbs. Its flavors of cherry, red plum, ruby grapefruit, and minerals overlap on the palate to form a sensory narrative. “Our goal,” says Howell, “is not to conform to the requirements of a blind tasting, where the biggest wine makes the strongest impression. Wines that are picked a bit earlier and made a little more gently often have more of a story to tell.”