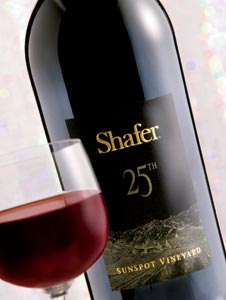 Contrary to the wistful pronouncements of lore, the transformation of the Golden State from bovine Valhalla to the world’s fifth largest economy was not predicated upon its natural charms, but on a succession of well-orchestrated PR campaigns, beginning with the sundry promotional guides that lured Midwesterners along the Oregon Trail in the mid-1800s. In the 1970s, similar promises would tempt John Shafer away from his position as vice president of a textbook publishing company in Chicago. A self-described “city boy” who had studied engineering at Cornell University, Shafer happened across a report by Bank of America on the California wine industry, and the notion of making his living in the wide outdoors, rather than in the confined precincts of an office tower, captivated the then 45-year-old executive.

The ensuing adventure (or “folly,” as Shafer characterizes it) paralleled many a California dream. After scouring the state for a suitable property, the would-be vintner decided in 1972 on a neglected 30-acre hillside property north of the town of Napa. Studded with walnut trees and planted with a patchwork of relatively obscure red and white varietals, the land possessed certain desirable qualities, even to the not-quite-tutored eye of a “city farmer.” “This site was magnificent,” he recalls, “and exactly what I was looking for—hillsides of thin, volcanic soils that offered quick drainage. South and west exposures in the southern end of the valley offered a nice incorporation of midday heat . . . and then of cool late-day breezes from the San Francisco Bay.”

This parcel lay at the very center of what would become the Stags’ Leap appellation. Yet, despite his happy prescience, Shafer discovered many further hurdles in the establishment of his winery. Shortly after his first planting of rootstock, once it had begun to bud, deer slipped through a hole in fencing and chewed the vines down to the ground. And, as Shafer’s son, Doug, now president of Shafer Vineyards, recounts, “One weekend, I was helping install a new irrigation system, and we had an expert working with us. It was a hot summer day, so we turned on the pumps, and all of a sudden, one by one, we saw these 20-foot geysers erupt in the vineyard. It was a disaster.”

Such setbacks delayed winemaking plans until 1978, when the Shafers, who had previously sold their fruit for the manufacture of bulk wine, produced the first vintage of their now legendary Hillside Select. Dubbed by the family the “electric blanket vintage” because, due to unusual cold, the barrels had to be wrapped in these household appurtenances to achieve malolactic fermentation, this wine became one of the most talked-about releases of that year. “I think the ’78 nailed down what would be our style,” notes Doug. “But we didn’t know it, and we didn’t realize it until the ’86 and ’87 vintages, when we started to really focus on what this vineyard can give.”

The vineyard would give, over the coming decades, beginning with the equally superb 1979 Hillside Select (the year the Shafers finally broke ground on the winery), what now amounts to a dynasty of vibrant, creative, and seductive Cabernets, including the powerfully ripe 1987, the profoundly complex 1991, and the super-concentrated 1997, all of which have earned the vineyard its devoted following. The latest release, 2001—another beautifully extracted wine—joins this pantheon, marking the winery’s 25th year of operation. To celebrate, John and Doug Shafer have bottled in magnums 25 barrels of single-block Cabernet from their Sunspot Vineyard, a key component of Hillside Select and the family’s favorite vines. With an intense spicy fruit nose of blackberries and fresh peach pie, the 25th Anniversary Sunspot Cabernet Sauvignon’s flavor branches out, tracing its fragrance fluidly to the finish with highlights of persimmon, cedar, and spice. “These vineyards kept us going for 25 years,” says Doug, “and the 2001 vintage was their last, since production on that segment was so far down, it didn’t make sense anymore.” But, he adds, the vines will live on for another 30 years in this limited-edition bottling.

The 25th Anniversary Sunspot Cabernet Sauvignon is being sold exclusively to Shafer Vineyards’ allotment list; however, 30 magnums ($400 each) have been reserved for Robb Report readers. For those who live in nonreciprocal states, the winery will hold the bottles for 60 days for pickup.