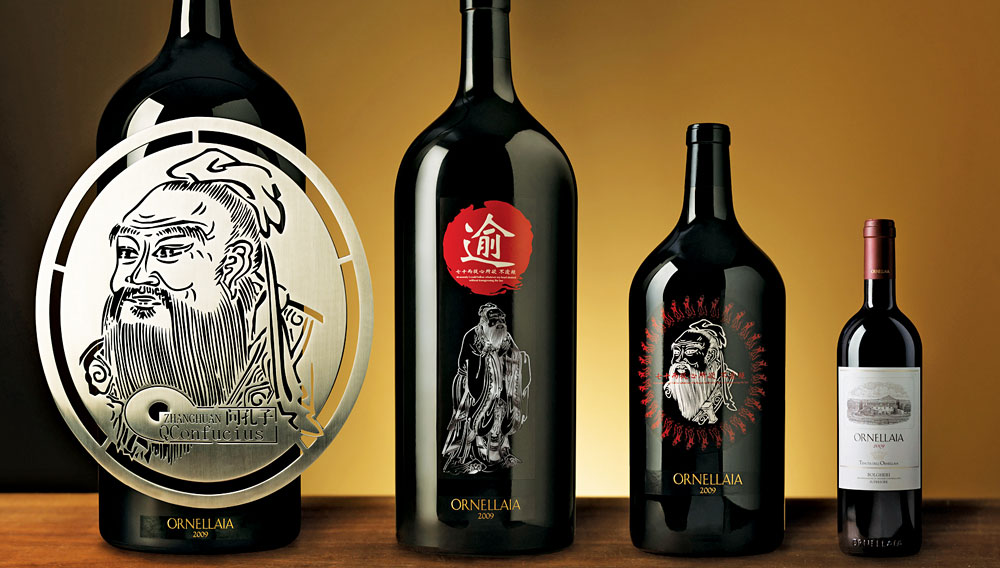 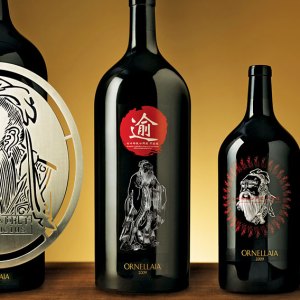 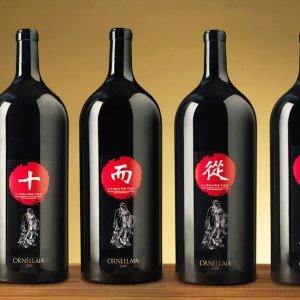 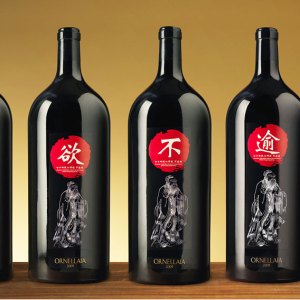 Except for the rows of unusual bottles arranged on pedestals throughout the ballroom, the large gathering in April at the Mandarin Oriental, Hong Kong, could have been a reception for a trade conference or a diplomatic summit. People from around the globe mingled, as servers circulated silver trays of wine and colorful delicacies, such as sake-infused crab and deep-fried olives hanging from miniature olive trees. Yet these festivities merely served as a prelude to the serious business at hand: a major merger of fine art and fine wine.

The two parties to this union were renowned contemporary Chinese artist Zhang Huan and Tenuta dell’Ornellaia, owned by Marchesi de’ Frescobaldi, one of the preeminent producers of wine in Italy. The occasion was the denouement of Ornellaia’s Vendemmia d’Artista, a multiyear project that funds cultural programs worldwide by inviting an international artist to interpret the personality of each new vintage through an original work of art that is permanently installed at the winery in Bolgheri. Large-format bottles created by the artist are then auctioned off to collectors. Each vintage has a theme: The first, 2006, was Exuberance; 2007, Harmony; and 2008, Energy. For the 2009 vintage, the winemaking team and winemaker Axel Heinz chose Equilibrium as the theme.

“This is the first time [in China] that an artist like myself has worked with a wine label,” says Huan, who at first hesitated to accept the proposition. “If it had been a commercial venture, I would have questioned its appropriateness. But the charitable purpose appealed to me.”

As he learned more, he came to recognize how winemaking relates to the creative process. In tasting the 2009 Ornellaia ($215), he detected grace and elegance, as well as a soft, harmonious influence—a balanced beauty he likens to a healthy body in tune with nature. Indeed, the vintage’s dark hints of chocolate and espresso provide a measured counterpoint to its ripe blackberry flavor and enlivening acidity. Wine of this caliber, Huan notes, must be nurtured in a particular environment, just as the masterpieces of Europe’s Renaissance could only have emerged from that rich milieu.

For the Frescobaldi family, which played a significant part in that cultural rebirth, patronage of all the arts has remained a way of life for nearly a millennium. In 1302, an antecedent saved the first seven cantos of Dante’s Inferno from a fire, returning the poem to the poet to finish; in the early 15th century, another ancestor commissioned architect Filippo Brunel­leschi to construct Florence’s church of Santo Spirito, next to which stands the family’s palace, filled with works by Andrea della Robbia and Simone Martini, among many others. Now the Frescobaldis have added to their collection Questioning Confucius, Huan’s steel sculpture of the philosopher whose teachings emphasize balance in all things; and on the evening of the auction, a handful of collectors acquired 10 of the artist’s special 100 double magnums, 10 imperials, and a single salmanazar of Tenuta dell’Ornellaia 2009, raising more than $191,000 for the H2 Foundation for Arts and Education.

“Confucius taught that we should respect nature in order to establish a world of equilibrium where we can live in harmony,” observes Huan. “If there is disharmony between man and nature, natural disasters occur—and then there can be no more wine.”