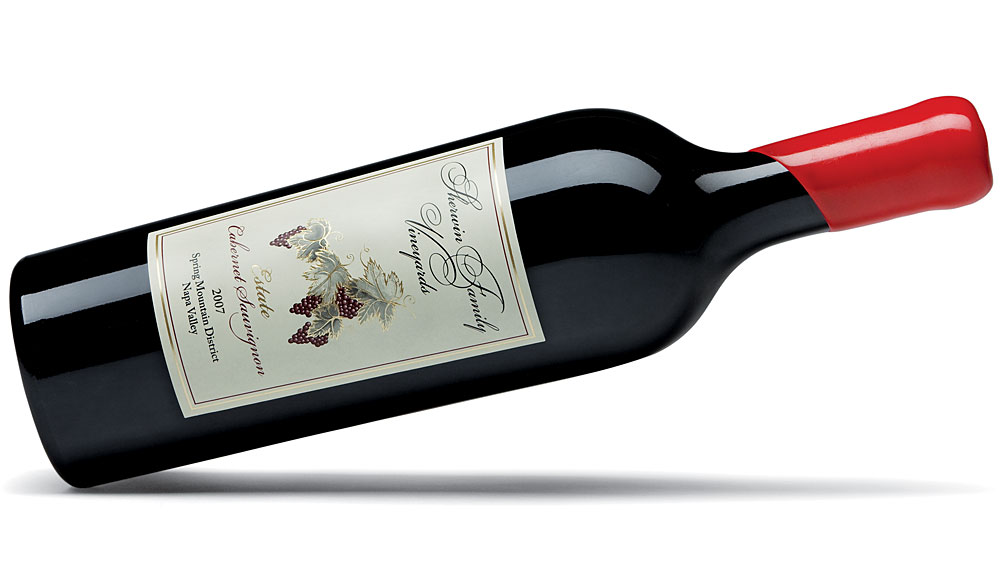 A few months after the terrorist attacks against the United States on September 11, 2001, Linda and Steve Sherwin received a request from a group of Italian vintners organizing an auction to benefit the families of employees of Windows on the World, the ill-fated restaurant on the top floors of the World Trade Center’s North Tower. Held in Lake Garda, Italy, the event would offer bidders 50 pairs of special large-format bottles of wine—one from an Italian producer and one from a Napa Valley, Calif., winery—as a symbolic display of international unity. Relative newcomers to the industry, the proprietors of Napa Valley’s Sherwin Family Vineyards were flattered to be asked to participate. “I told my wife that I didn’t want to send over a regular bottle,” says Steve Sherwin. “I wanted to dress it up to meet the occasion.”

Sherwin took the container to a local artisan, who etched and painted a graceful American flag onto the glass, along with the inscriptions “In God We Trust” and “United We Stand.” This bottle of Sherwin Family Vineyards 1998 Estate Cabernet Sauvignon was presented at auction with a magnum of the classic 1985 Tenuta San Guido Sassicaia—a combination that brought one of the evening’s highest bids.

That sale was a heady moment for the Sherwins, who had purchased their 30 acres on the west side of the Spring Mountain District some five years before. The property’s primary appeal was a beautifully situated home with wide verandas that overlooked a glassy lake, but it also included an unbonded garage-size winery and three acres of old-vine Cabernet Sauvignon, Merlot, and Cabernet Franc. Intrigued by the land’s potential, Sherwin began clearing the heavily forested acreage around this viticultural gem to create the present 16 acres of vineyards. He planned to sell his grapes to neighboring producers, but the first year’s harvest from the original vines yielded only about a ton and a half of fruit—too little to attract interest. So he hired winemaker Phil Steinschriber, then of Diamond Creek Vineyards, as a consultant.

“After a couple of years, we entered that first vintage in a tasting in San Francisco,” Sherwin recalls. “Someone from Wine Spectator came along and said they wanted to do a story on us. They came out with an article about the new kid on the block on Spring Mountain. That was when my wife and I looked at each other and said, ‘Well, I guess we’re in the wine business.’ ”

The richly extracted style of Sherwin’s Cabernets—which exude wild berry, Asian spice, and earthy mushroom and mineral flavors—has continued to draw converts, many of whom bid at auction for the special flag-festooned bottles that he continues to make to raise money for various charities, including the American Red Cross. In addition to the standard 750 ml bottle ($90), the 2007 vintage has now been released in a very small quantity of numbered collectible magnums ($475), 3-liter bottles ($950), and 6-liter bottles ($1,900). The winery has also produced a handful of 3-liter ($3,800) and 6-liter ($7,600) formats featuring Swarovski-crystal flags and special burl-wood cases. For Sherwin, this program remains a point of pride and a vehicle for giving back to the community. “We are the only winery in the United States,” he says, “that has federal certification to place the American flag on our bottle.”