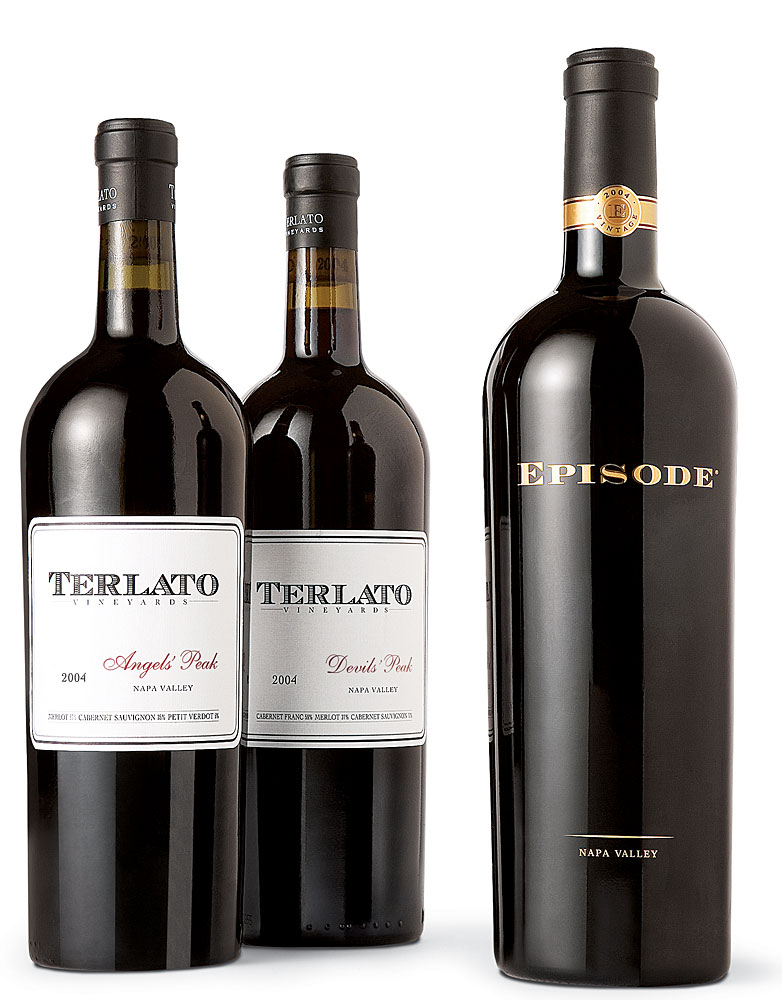 Anthony Terlato’s tasseled leather loafers crunch gently on the gravel path overlooking Angels’ Peak Vineyard. His shoes—and navy slacks, tailored pin-striped button-up, and yellow silk vest—appear out of place in Napa Valley, where hiking boots and fleece pullovers are the norms. The Chicago-area resident’s accent likewise seems incongruous, as if he should be commenting on the Cubs or Bears rather than on the optimum ripening conditions for Cabernet Sauvignon. But when Terlato speaks, he immediately dispels any notion that he is a naive Napa newcomer. “There are 110,000 wines in the United States,” the 53-year industry veteran says from his hilltop vantage point. “The world does not need one more wine.”

Angels’ Peak Vineyard, located in Napa’s Rutherford District, is at the heart of the sturdy-framed 73-year-old’s late-career entrée into winemaking. In 2004, drawing from his decades as an importer, marketer, and distributor of premium wines, Terlato released the inaugural vintage of Episode, a Bordeaux-style blend anchored by Cabernet Sauvignon from Angels’ Peak vines. Thanks to Episode’s success—and its proprietor’s boundless enthusiasm—the wine has spawned a trio of diversely styled blends and sparked the launch of Terlato Family Vineyards.

Formed in 2005, Terlato Family Vineyards is a division of the Terlato Wine Group, a firm that has its roots in postwar Chicago. In 1955, Terlato, then 21, began working in his father’s wine and spirits shop. “At that time, the biggest business was sherry, port, muscatel, and Angelica in gallons,” recalls Terlato. “My father’s store had people who came from 35 to 40 miles away because we had such a great selection of Bordeaux.”

Terlato’s early introduction to Bordeaux—first-growth examples of which his father sold for less than $5 per bottle—had a lasting influence. In 1956, he joined Pacific Wine Co., a Chicago-based bottler owned by his father-in-law, Anthony Paterno. By 1964, then-president Terlato had launched Paterno Imports, an affiliate of Pacific Wine, and had transformed the company into the largest distributor of premium French and Italian wines in the United States.

Today, Terlato leaves the daily operations of the import business, now known as Terlato Wines International, to his sons, William and John. The patriarch, meanwhile, focuses on the family’s estates, which include Rutherford Hill Winery—the location of Angels’ Peak Vineyard—and Chimney Rock Winery, where Terlato began working with his vice president of winemaking, Doug Fletcher.

Each of the Peak Series wines ($48) has its place in Terlato’s portfolio: Angels’ is the softly tannic seductress of the group; Cardinals’ is a full-bodied bruiser built for cellaring; and Devils’ establishes a finely balanced middle ground. Episode, meanwhile, represents the pinnacle of Terlato and Fletcher’s efforts. Released in October, the 2004 version ($150) is an elegant coffee- and black cherry–tinged concoction that may be the best of the wine’s four vintages.

Future vintages promise more from Terlato. He alludes to plans for a Syrah blend, Galaxy, as well as for a fourth Peak Series wine, which will honor Château Mouton Rothschild. Taken as a whole, however, Terlato’s multifaceted portfolio stands as a tribute to his own career. “When I think about how this all happened, it was just a natural course of events,” he says. “I wish I could say that I planned it all, but I didn’t. It wasn’t that I said, ‘I’m going to start as a retailer and someday become a winemaker.’ That was the furthest thing from my mind.”