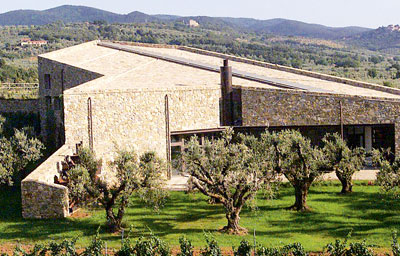 Gesturing toward the silver pitcher on the table in front of him, Angelo Gaja asks if it contains water. When told that it does, he expresses his relief that it is not wine and pours a glass for his guest and himself. It is an ironic introduction to one of Italy’s most influential and celebrated wine figures, the fourth-generation owner of the Gaja wine company, who, over the past 40 some years, has helped elevate the quality and perception and price of Italian wines in general and those made from the Nebbiolo grape in particular. He was among the first to demonstrate that an Italian winemaker could demand and receive a lofty price for a world-class wine; today a 2001 Gaja single-vineyard Nebbiolo retails for as much as $280. And yet his preference for water in this instance is understandable. After all, it is 10:30 am, an early hour to imbibe. More to the point, this is, as Gaja explains with a twinkle in his strikingly pale blue eyes, one of the rare instances in the past couple of weeks when he has sat down to speak with someone and not found a glass of his wine waiting for him. It is a burden, but one he bears well, remaining, at 65, a charismatic, energetic champion of his native Piedmont and its wines.

His late-April stop in Boston is part of a monthlong visit to the United States to promote the considerable merits of his wines from his two Tuscany estates and the family’s namesake winery in the Piedmont town of Barbaresco. Gaja would be releasing the 2001 vintages of the Piedmont property’s most renowned wines later in the spring, and it might be another three years before he releases another Barbaresco vintage. To this news, one might say darmagi, which in the dialect of Piedmont, one of four languages that Gaja speaks, means “what a pity.” It is also the name Gaja gave to his Barbaresco-grown Cabernet Sauvignon and the vineyard from which it originates. Having assumed control of the family business a decade earlier, Gaja was, in the late 1970s, introducing French grapes and viticulture to Italy—generally considered an act of heresy. The story goes that one day in 1978, Gaja and his father, Giovanni, passed the vineyard while the native vines were being dug up and replaced with Cabernet Sauvignon vines. Viewing the activity, Giovanni uttered, “Darmagi.”

From other Gaja vineyards in the Langhe hills around the town come the Gaja company’s flagship Barbaresco, made from Nebbiolo grapes from 14 different vineyards, and the single-vineyard stars of its portfolio, Sorì San Lorenzo, Sorì Tildìn, and Costa Russi, each comprising 95 percent Nebbiolo and 5 percent Barbera. Gaja, dressed in a dark blazer, his closely cropped gray hair combed straight back from his forehead, is eager to talk about his premier offerings. “This vintage is the last of seven very good, excellent vintages,” he says, leaning forward in his seat and delivering the words in his characteristically rapid-fire fashion. “We had [from 1995 through 2001] less rain during the wintertime and spring. Even fall was dry. The 2001 Barbarescos have a beautiful balance, already quite approachable. Serve them with meat—medium rare—with cream or another sauce, some Parmesan cheese, and a piece of bread. Perfect.”

The Barbarescos can be enjoyed now, but it is best to let them sit awhile; each has an aging potential of 30 years or more. Gaja suggests as long as 50 years. The wines’ quality reflects the French growing and vinification methods that he pioneered in Piedmont; he reduces the grape yield per plant and practices small-barrel, or barrique, aging to add an elegance to the traditionally austere Piedmont wines. The Barbaresco is characterized by its complexity, derived from its multi-vineyard sourcing; Sorì San Lorenzo is regarded as the most robust of the single-vineyards; Sorì Tildìn possesses the roundest tasting profile of the three; and Costa Russi is renowned for its captivating and refined nose.

While Piedmont’s weather conditions contributed to the quality of Gaja’s 2001 Barbaresco wines, they ensured that there will be no 2002s; as previously happened in 1992 and 1994, excessive rainfall during the fall weakened the harvest and prompted Gaja to sell all of the red wine from those vineyards to other wineries. The extreme heat of 2003 also has jeopardized that fall’s yields. “We have to keep the credibility of the wine,” says Gaja.

However, he notes, the 2004 harvest was exceptional. “I’ve seen only two vintages like that, in 1960 and 1984.” But the release of the 2004 Nebbiolos from Barbaresco, Gaja adds, still is three years away. Darmagi, indeed.