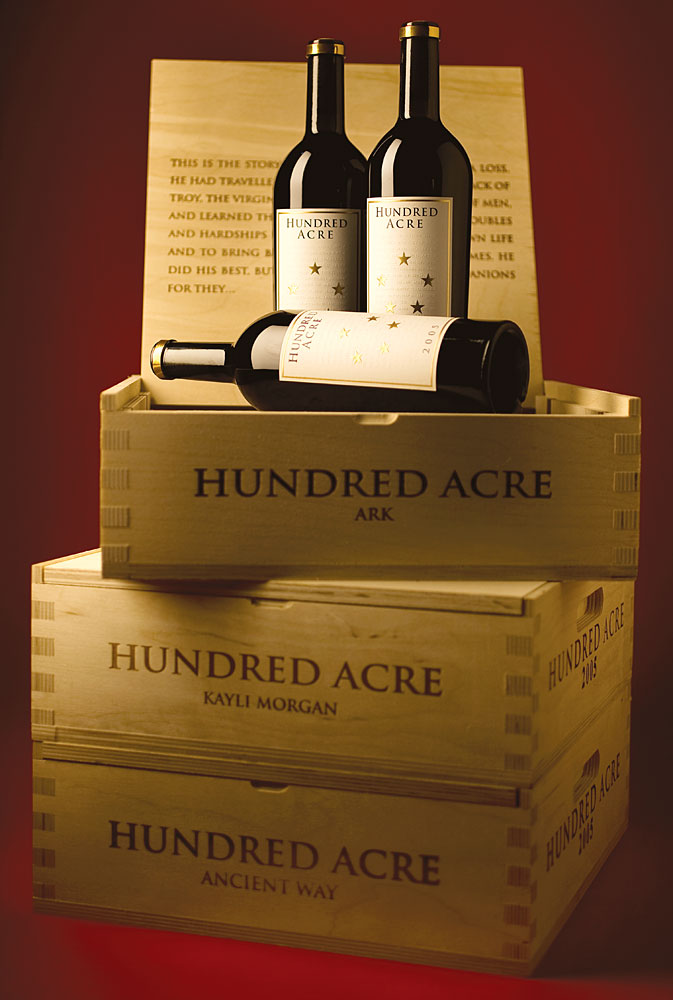 Jayson Woodbridge inhabits a world quite apart from our own. One senses this upon entering the office of the Canadian-born former investment banker, who, in 1998, purchased a piece of land in Napa Valley with the intention of launching his own wine label. Concealed behind a pair of steel security doors in a 19th-century office building in St. Helena, Calif., the loftlike space of weathered stone and beams houses objects that recall the collages of Max Ernst. Jewel-toned contemporary canvases stretch like luminous aquariums across the wide piers between windows, while an upright electric guitar and a large bronze octopus tentacle capped with a lampshade spring flowerlike from a mound of leather-and-steel furniture. Yet this is not where the vintner’s spirit truly dwells. “I go to all my [Napa] vineyards every single day, rain or shine,” says Woodbridge. “I walk around those vineyards, and I talk to them. I take my children out there, and I wander around and tell them stories. Once in a while I even lie down and sleep out there. I just think it’s one of those incredibly magical places in the world.”

Whimsy permeates the culture of Hundred Acre, Woodbridge’s exclusive producer of single-vineyard, single-varietal wines. The name, borrowed from the make-believe woods in A. A. Milne’s books, is fitting: Woodbridge remains as enchanted with the first property he acquired—the Ark Vineyard, located upslope of Beringer’s Chabot Vineyard—as Christopher Robin is with the neighborhood of Winnie-the-Pooh. “When I first saw it,” he says, “I quit everything, sold everything I had, borrowed money, and started Hundred Acre.”

Woodbridge also purchased the Kayli Morgan Vineyard, an important property at the base of Howell Mountain, from which he, winemaking consultant Philippe Melka, and vineyard manager Jim Barbour made the label’s inaugural vintage, a 2000 Cabernet Sauvignon. Woodbridge later acquired an Australian property in the Barossa Valley from which he makes the Hundred Acre Ancient Way.

Although Woodbridge retains a highly skilled staff, he relies primarily on his own instincts to guide decisions. “The wine is in my head,” he says. “It’s all based on the fruit and the aromatics. You just have to taste and smell and let yourself go into the wine, where you’re kind of dreaming it in your head. You’ve got to believe in your own ability to fuse with the wine.”

Practical measures also come into play. The numerous microblocks within the vineyards are picked by cluster in three to five passes, then double sorted—first in the vineyard, then in the winery. The berries are also sorted in the winery before being fermented in puncheons as discrete microblocks and, ultimately, aged in barrels to ready the component wines for blending. It is at this point that Woodbridge casts his spell, conjuring unique layered blends. The three Hundred Acre wines ($750 per three-bottle case) show an almost alchemical ability to shift their character in the glass, transposing their elements on the half hour into multiple variations on their oenological themes. The 2005 Ark Vineyard Cabernet Sauvignon shifts from wild berries and cassis to roasted coffee and earthy mineral. The 2005 Ancient Way Shiraz offers up an overture of blueberry, coffee, and chocolate that dissolves into an elixir of balsamic-glazed fig and licorice. And the 2005 Kayli Morgan Cabernet renders an ethereal siren’s song of ripe cherries, vanilla, allspice, cedar, and mint that lingers for hours—just as Woodbridge hopes it will do.