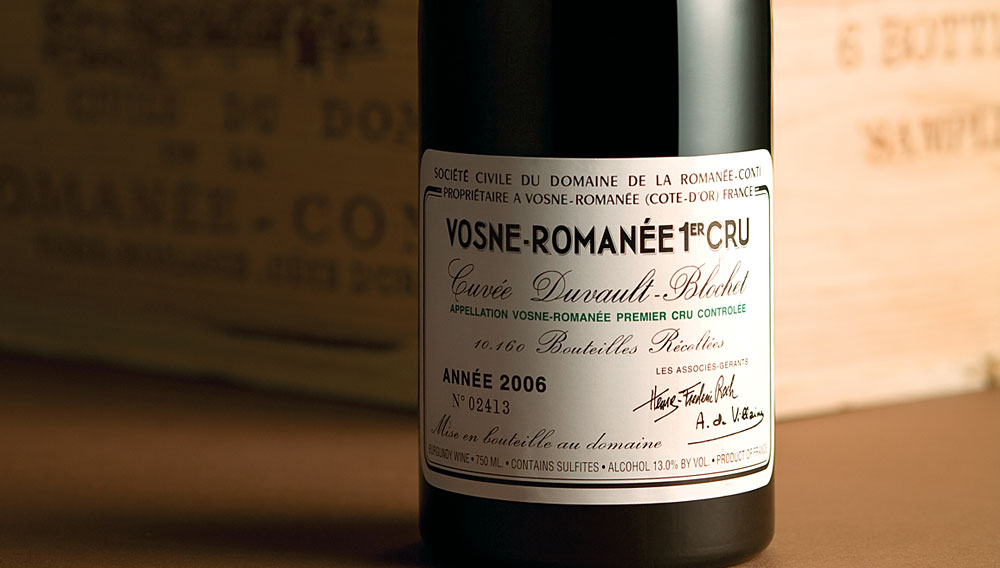 Domaine de la Romanée-Conti’s relatively modest acreage required an immodestly long time to assemble. Although the vineyard from which the domaine derives its name was first planted by the Abbey of Saint-Vivant in the early 13th century, the man responsible for shaping the entity that many collectors now regard as the world’s greatest wine producer was Jacques-Marie Duvault-Blochet, who acquired the neighboring Romanée-Conti and La Tâche vineyards in 1869. A direct ancestor of current codirector Aubert de Villaine (who, along with Henry-Frédéric Roch, now runs the domaine), Duvault-Blochet added to this portfolio vineyards in Richebourg, Échezeaux, and Grands Échezeaux; yet one of his most memorable contributions to the domaine’s history was made posthumously in 1934 with the introduction of the first vintage of Cuvée Duvault-Blochet, a Vosne-Romanée premier cru produced from the fruit of the grand cru vineyards’ younger vines. Typically sold to négociants, these grapes proved that year to be of such exceptional quality that Edmund de Villaine, Aubert’s grandfather, decided to make a wine to honor his predecessor.

Another 65 years passed before this cuvée reappeared among the domaine’s new releases. Despite spring rain that threatened to infect the vines with mildew, the 1999 vintage benefited from an August heat wave that intensified the sugar levels and acidity of the grapes, which achieved near-perfect ripeness. Once the initial harvest was done, the vineyard team began to collect the remaining fruit. “The grapes from the young vines that we harvested separately in our grand crus were of such exceptional quality,” Aubert de Villaine stated in the domaine’s report on the 1999 vintage, “that we decided, if only for this time, to revive the tradition [of Cuvée Duvault-Blochet].” He went on to add that this bottling “in no way should be interpreted as the beginning of a ‘second wine’ from the Domaine, to be produced every year. . . . This [release] should be considered an exception.”

But if the bottling of Cuvée Duvault-Blochet was not quite the rule over the next seven vintages, neither was the 1999 vintage the sole exception. The domaine went on to produce this wine again in 2002 and a very small quantity of it in 2004. This spring, the directors announced the release of a 2006 vintage of the Vosne-Romanée premier cru.

Like 1999, the 2006 growing season saw cycles of intense heat and heavy rain that encouraged the growth of botrytis. However, as de Villaine points out, with these difficulties came opportunity. A hot, dry September accelerated the ripening process, yielding fruit with depth of character and balance similar to that of 2005. All eight of the 2006 releases exhibit seamless clarity and focus, from the aromatic Montrachet (about $2,080–$2,300)—with its scents of honeycomb, graham cracker, and lime lozenge—to the silky-textured La Romanée-Conti ($3,100–?$3,445). Yet the Cuvée Duvault-Blochet ($225–$250), made with Pinot Noir grapes from the domaine’s grand cru vineyards, may in its youth most eloquently express the promise of 2006. “The character of the vintage,” says de Villaine, “is purity and transparency,” traits abundant in this Vosne-Romanée premier cru’s composition of wild strawberry, red currant, orange zest, ginger, and mint. The classic cuvée leaves you yearning for another sip—and wondering if we will see more of it in future vintages. Citing the challenges that made it possible, de Villaine is unequivocal on the subject: “I hope,” he says, “we see less.”