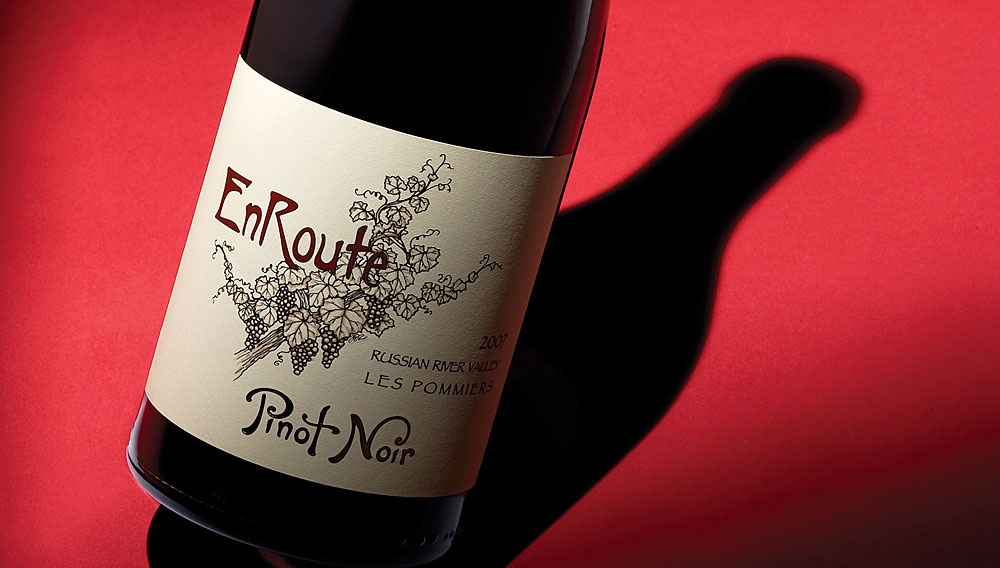 As with the rich and mighty, with the red grape of Burgundy, vintners must exercise a little patience. The finicky and thin-skinned varietal is notorious for its susceptibility to the vagaries of disease and weather. Yet in spite of its temperamental tendencies, it is the most beloved fruit of the vine among enthusiasts and those producers who undertake its cultivation, as the founding partners of EnRoute, a newly introduced winery specializing in Russian River Valley Pinot Noir, can affirm.

“I’ve been [working] at Pinot Noir for the better part of 25 years,” says Dirk Hampson, director of winemaking for the Far Niente, Nickel & Nickel, Dolce, and now EnRoute wineries, in which he and Far Niente president Larry Maguire are partners with members of the Nickel family. “We’re kind of slow sometimes,” he laughs.

Shortly after founder Gil Nickel hired Hampson as assistant winemaker for Far Niente in 1982, they explored the possibility of producing a Pinot Noir blend to join the historic winery’s Cabernet Sauvignon and Chardonnay offerings. Nickel had purchased another 19th-century property, Chateau Chevalier, located in the Napa Valley’s Spring Mountain District, where some of the acreage was planted to that particular grape, and they decided to experiment. “That was my first Pinot Noir in this country,” says Hampson, who had worked previously at Labouré-Roi in Burgundy’s Nuits-Saint-Georges region. “We actually made a Far Niente Pinot Noir, which is still one of those cult things that some collectors know about, but that very few people ever saw. It was beautifully styled. But we probably intelligently—though reluctantly—dropped it.”

Despite their love of fine red Burgundy, the Nickels, Hampson, and Maguire felt their Pinot project compromised the winery’s original mission to focus exclusively on its two existing varietals. Only with the creation of sister winery Nickel & Nickel—which was devoted to producing single-vineyard, single-varietal wines from the Napa and Sonoma regions—did the partners resume their pursuit of Pinot. When Hampson and Erik Nickel, Gil’s nephew, decided to buy, on behalf of the partners, Graton Vineyard in the Green Valley area of the Russian River Valley in 2005 with the intention of making a single-vineyard wine, their thinking shifted. “It’s funny how you have a passion for something and ideas bubbling around, and suddenly it’s clear,” says Hampson. “We looked each other in the eye and said: We’ve talked about this. We have this vineyard. And we all committed and didn’t look back from that moment on.”

The partners chose Nickel & Nickel’s Andrew Delos as winemaker. Although EnRoute also acquired the Amber Ridge Vineyard in 2007, all of the fruit for the inaugural vintage came from two other vineyards—Manzana Vineyard in Green Valley and another on the Sonoma Coast—because the overall style of the blend, rather than vineyard designates, drives the label’s winemaking philosophy. “I view each block from each vineyard as a piece of the puzzle,” says Delos. “I know that certain vineyards have more supple tannins, more of the rose petal–perfume profile. I can break down each vineyard into four or five different tanks to capture the essence of each to make my overall blend.”

The 2007 EnRoute Pinot Noir Russian River Valley Les Pommiers ($50), of which nearly 1,300 cases were made, exhibits aromas of raspberry, pomegranate, rose hip, and cranberry. A sip reveals a sensual texture and vibrant layers of black cherry, sandalwood, and wet granite that surprise the palate as they shift and evolve in the glass. “Wine is a journey,” observes Hampson of this protean quality. “You’re never really there—you’re always en route.”