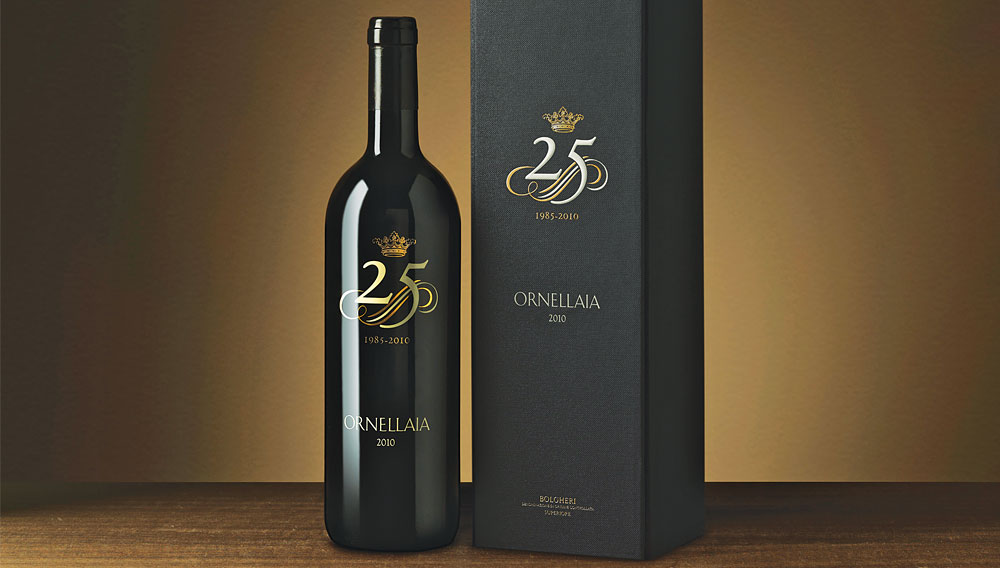 Earlier this year, on a balmy May evening in London, a soigné crowd assembled at the Royal Opera House—not to see a performance of a work by Verdi or Puccini but to be immersed in Italian art of quite another kind. The gala, which benefitted the Royal Opera House Foundation, was organized by Ornellaia, Tuscany’s esteemed wine estate, as part of its Vendemmia d’Artista program, an ongoing project that echoes the Italian Renaissance tradition of artistic patronage.

Each year, the estate selects an internationally renowned artist to create an original work of art that captures the personality of the vintage, as well as a series of large-format, limited-edition bottles that are auctioned off to benefit institutions supporting the arts. Past themes include equilibrium, energy, and harmony, but for the 2010 vintage—Ornellaia’s 25th—the chosen subject was, appropriately, La Celebrazione. In fashioning the limited-edition bottles for this milestone vintage—100 double magnums (3 liters), 10 imperials (6 liters), and a single salmanazar (9 liters)—the artist Michel­angelo Pistoletto alluded to both the silver anniversary and the expression “in vino veritas” by ornamenting the vessels with mirrorlike elements of polished metal. A number of these masterpieces were auctioned by Sotheby’s at the London event, as well as at a February function in New York, bringing in a total of $420,000 for the foundation.

“Mirrors allow us to look at ourselves to see what we have achieved in 25 years,” says Ornellaia’s winemaker, Axel Heinz. “Pistoletto’s work also looks a bit like a jigsaw puzzle, which reminds me that Ornellaia is a patchwork of different vineyards with varying soils and exposures out of which we make wine.”

Piecing together that puzzle is simpler in some years than in others, concedes Heinz, who in 2010 was confronted with a winemaking conundrum. The growing season was one of the coolest and latest on record in Bolgheri, where Ornellaia cultivates the Bordeaux varietals used to make what some critics call international-style wines. Though Heinz bristles at this term, he recognizes that the typical regional influences are less apparent in this particular vintage. “The weather stayed very cool until the end of harvest,” he says, “yielding wines that are less Mediterranean in their character but with a lot of elegance and breadth.”

This blend, though less heady than its predecessor, is nevertheless deep black-red in color and shows floral notes of violet and lavender, and hints of strawberry, vanilla, and white pepper. On the palate, soft black-plum, cocoa, and black-olive flavors glide atop gentle tannins toward a velvet finish.

The Ornellaia 2010 also differs from prior releases in its packaging. Each 750 mL bottle bears a commemorative 25th-anniversary insignia, and for the holidays, the wine is presented in a limited-edition gift box ($240). Yet despite its commemorative container and slightly cool, northern flavor profile, the wine remains true to its origins. “The fact that we use Bordeaux varietals often leads people to label our wines as international—an idea we clearly reject,” says Heinz. “Bolgheri is a unique place, where a combination of soils and maritime climate allows us to make wines . . . that are ripe, generous, and exuberant but at the same time complex, elegant, and vibrant. That all sounds quite Italian, doesn’t it?”