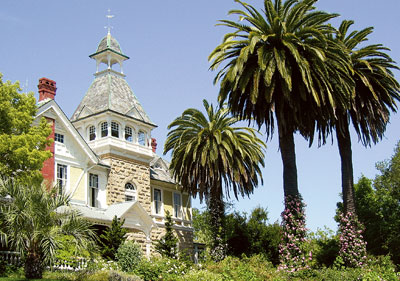 The 845 very private acres that now form Spring Mountain Vineyard have for more than 125 years remained an eye of changeless calm at the center of the Napa Valley, whose agrarian past has been all but swept away by a storm of development, economic expansion, and tourism. Within the vineyard’s serene precincts, orchards sway in soft breezes, redwoods shelter clusters of fern and olive trees, and pairs of donkeys munch apples beside a shingled, Eastlake barn. Here, the scenery gives way only to the elegant man-made lines of the property’s residence, Miravalle. This magnificent remnant of Victorian grandeur—which rises as a serried ridge of stone cornices, wooden gables, and spires above its surrounding vineyards—seems to reflect, in miniature, the peak of Spring Mountain itself presiding over the sweeping plain of the valley. It is one reminder that this land has served as the canvas on which several generations of visionaries have realized their dreams.

One of the first of these was the builder of Miravalle, Tiburcio Parrott, born in 1840 to John Parrott, then the U.S. consul in Mazatlán, Mexico, and his Mexican mistress. “He was an exotic flower in a domestic garden,” notes Spring Mountain Vineyard general manager Tom Ferrell. “His interest in the Rattlesnake Quicksilver Mining Co. in Lake County brought him through Napa quite often. His stepmother, Abby, had bought this property for him at the north end of town, and he decided to settle here.” In 1885, he constructed his palatial home, designed by the architect responsible for the Beringer Rhine house. A bachelor (and frequent habitué of the Stone Bridge Bordello in St. Helena), Tiburcio enjoyed the role of gentleman vintner for almost a decade, planting his acreage and constructing a small winery and cave. The role was to be a brief one, however: He died in 1894 of stomach cancer—the same year that phylloxera attacked his beloved vines.

Tiburcio’s project was taken up 80 years later, when winemaker Michael Robbins acquired the property, replanted the vineyards with Cabernet Sauvignon and Sauvignon Blanc, expanded the cave, and erected a stylish winery on the site of the original facility. During his nearly 20 years as owner, Robbins, who renamed the estate Spring Mountain, produced some stunning vintages, including the 1973 Chardonnay that competed in the famous 1976 Paris blind tasting. When Spring Mountain was purchased in 1992 by its present owner, general manager Ferrell made it the centerpiece of a more ambitious undertaking that now incorporates two neighboring historic estates: Chevalier, established in 1891, and La Perla, founded in 1873.

“The three properties are some of the most historically important in the valley,” notes Ferrell. “One of the vineyards has been continuously producing since the 1870s. It really has a unique sense of place.”

“It’s like making wine in a national park,” says winemaker Jac Cole. “Spring Mountain has one of those auras that make it special.” The mountain location, however, has a more practical than mystical influence over the estate’s wines. “The slope is eastward facing, and the soil is very porous, not too fertile, which limits how the wines develop,” he observes. “So you get smaller berries with greater concentration, high acid value, and softer tannins than you would expect.” Moreover, the many unique vineyard blocks furnish the winemaker with a varied artist’s palette. “We have 135 separate blocks here,” says Cole. “I’m like a kid who has a big box of crayons.”

The most subtle and complex red is perhaps the 2001 Elivette ($90), a Bordeaux-style blend with the sinewy, disciplined grace of a prima ballerina. Sourced from the La Perla and Chevalier vineyards, this richly dark amalgam of Cabernet Sauvignon, Merlot, and Petit Verdot traces a bowlike curve from forest blackberry to wooded spice.

Cole blends his superb Sauvignon Blanc ($28) from grapes grown at the higher elevations of La Perla, as well as from Robbins’ Miravalle plantings from the ’70s and ’80s. The finished wine washes cool and clean as a mountain creek over the palate, tingling with essences of bay leaf, white peach, and candied citrus.

The most curious wine, however, was made specifically for Spring Mountain’s owner, a European gentleman with a taste for Burgundy. “We actually do make a very small amount of Pinot Noir, and that was totally at the behest of the owner,” says Cole. “I would’ve been the last person to believe that Pinot could ripen properly up as far as St. Helena, and as high up as 1,600 feet. But we’re making a mountain Pinot that’s turning out pretty lovely.”

The 2003 vintage (to be sold only at the winery) represents yet another phase of this extraordinary property’s legacy, which continues to evolve while maintaining its timelessly serene allure. Built, like the Victorian Miravalle, on a stone foundation, the Pinot rises from deep mineral and earth underpinnings to a lusciously detailed filigree of cherry, boysenberry, and rose petals that should age as gracefully as the place from which it came.