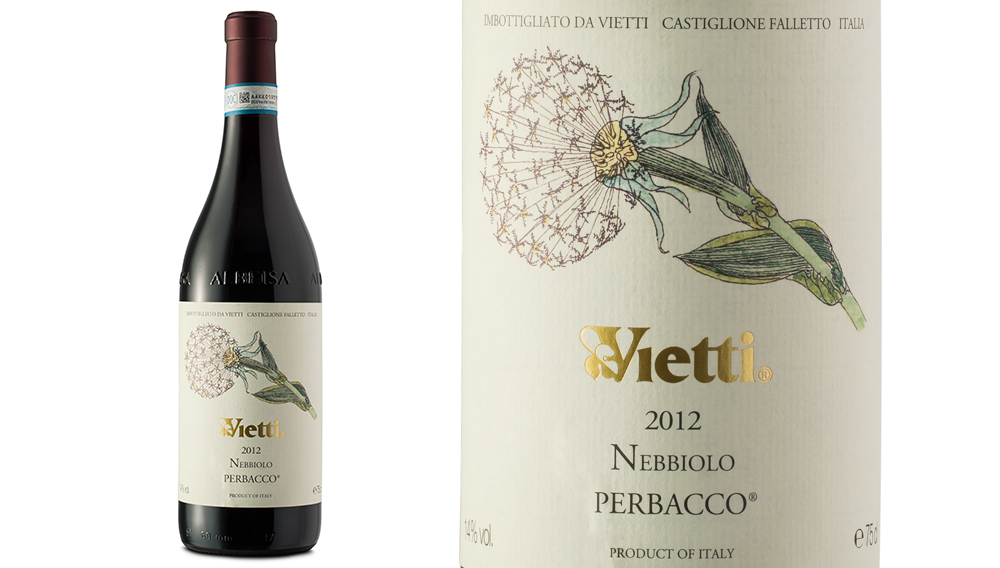 Barolo is not for those seeking instant gratification. That wine made from the Nebbiolo grape, like some of the old-line winemakers who produce it in the region, has a reputation for surliness—but unlike those particular Piemontese, the notoriously tannic wine mellows with age. However, Italy’s DOCG (Denominazione di Origine Controllata e Garantita), in its seemingly boundless appetite for arcane regulation, allows for Nebbiolo grapes grown in the Barolo region not only to be vinified into the famed eponymous wine, but also (with less aging required) into wines classified as Langhe DOC Nebbiolo, such as the 2012 Vietti Nebbiolo Perbacco ($25). These wines give Nebbiolo appreciators another, often more approachable, way to enjoy the fruits of these protean vines grown in their most renown region, and they give producers wines to offer that do not require 10 years to tame.

The Vietti family is steeped in the modern history of Piemonte and was instrumental in the arneis rediscovery and revival of the late 1960s (when then-patriarch Alfredo Currado worked to bring the white grape varietal—historically blended into Barolo—back from obscurity and the brink of extinction). The winery is among the most esteemed producers in Barolo, releasing no fewer than six different bottlings of each vintage, with its single-vineyard examples retailing for $300 to $500 after laying down a few years. In fact, Currado is often credited with pioneering and championing single-vineyard Barolo bottling in Piemonte after the model of the French cru designations.

Vietti’s Nebbiolo Perbacco, a Langhe Nebbiolo, is made from plantings grown within the Barolo region (not all Langhe Nebbiolo are) from vines that are an average of 35 years old alongside grapes destined for the vaunted Barolo designation, making it basically a declassified “grand cru” Barolo. For Perbacco (which translates to “for Bacchus”), Vietti vinifies and ages wine produced by each vineyard separately for two years, at which time the wine that the team deems will not benefit from more aging deviates from the winery’s Barolo Castiglione program (which goes on to be aged another year in casks). The wine is then blended together, sees two more months in stainless-steel tanks, and goes through malolactic fermentation, resulting in a subtle creaminess and reduced astringency. The final product is a lovely and more delicate interpretation of the Nebbiolo grape, ready to drink upon release, when its older siblings still often have an air of latex about them.

A buoyancy defines this lighter and very pretty Nebbiolo, with a slightly sweet rosewater and violet scent inviting further exploration. Exuberant and approachable, it still exemplifies some of nebbiolo’s austere astringency, though comparatively lush tannins and bright-red fruit redolent of cherries temper that here. The wine’s geographical provenance shines through with hints of spiciness, sarsaparilla, and sandalwood that mellow the fruit, along with an earthy grounding of black tea and anise. Try it alongside a creamy porcini and sage risotto to bring out the richness of the wine, or game such as herbed squab on a bed of wild mushrooms. Seared sea scallops with sunchoke and mushroom puree would play to the wine’s lighter side. (vietti.com)