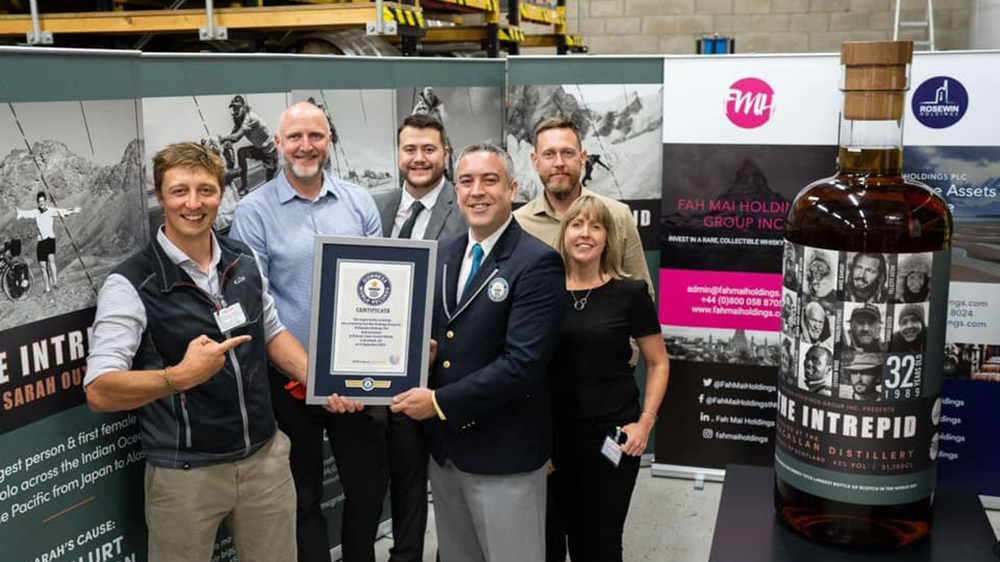 Here’s one whisky bottle that won’t fit on the top shelf. Or any shelf for that matter.

Edinburgh-based auctioneer Lyon & Turnbull will sell a 311-liter bottle of 32-year-old Macallan single-malt called The Intrepid next month. The bottle is the world’s largest, not just by volume but by height, as it stands at 5 feet 11 inches tall.

Last September, renown bottler Duncan Taylor Scotch Whisky took two American oak hogsheads filled with whisky that had been distilled by the Macallan in 1989—casks no. 6986 and 6992—and vatted them together to create The Intrepid, according to Lyon & Turnbull. The resulting pale gold single-malt has, the auction house says, has a gentle nose with hints of baked apple, pear and flaked almond and a smooth and warm taste that’s at once sweet and peppery. Once the process was complete, the whisky was poured into its giant bottle, which features a special label that features photos of some of the world’s most respected explorers, including Sir Ranulph Fiennes, Karen Darke MBE and Olly Hicks. The bottle was named in honor of these adventurers.

A closeup of The Intrepid’s label  Lyon & Turnbull

The bottle, which holds the equivalent of 444 normal-sized bottles of whisky, isn’t just believed to be the world’s largest. That’s designation was officially certified by Guinness World Records last fall, shortly after The Intrepid was bottled. It beat the previous record, which was held by Scotch brand The Famous Grouse, by 83 liters.

As big as the bottle is, it wasn’t large enough to house all of the whisky from the two casks. The rest was used to make a limited number of 12-bottle sets, according to The Spirits Business. Four of these sets will also be auctioned off by Lyon & Turnbull, as well as two much smaller replicas of the record-setting bottle.

“I’m sure there will be significant global interest in the auction of The Intrepid, a unique collection spearheaded by the record-breaking bottling standing at an incredible 5 feet 11 inches tall,” told the website. “Bidders will have the chance to buy a piece of Scotch whisky history. They will become the owners of an exclusive 32-year-old single malt Scotch from what is widely regarded as one of the world’s best distilleries, The Macallan.”

The Intrepid will go up for bid on May 25. Lyon & Turnbull hasn’t announced a sales estimate, but some believe it could become the most expensive bottle of whisky sold at auction. That record currently belongs to a bottle of the Macallan that sold for $1.5 million in 2018.