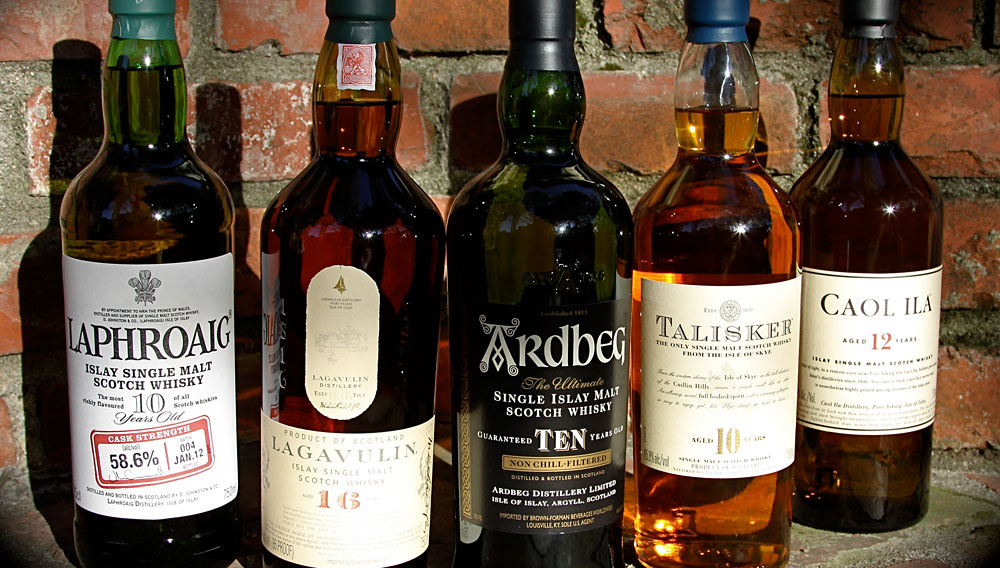 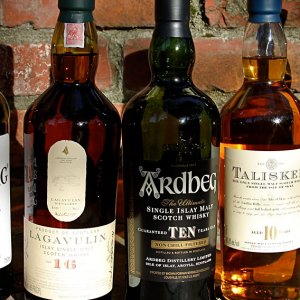 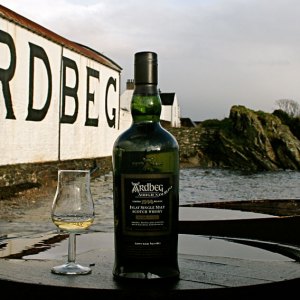 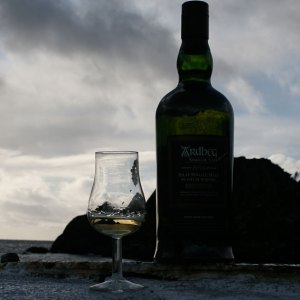 Of all the countless classifications of spirits, those with the widest spectrum of flavors are the single-malt whiskies from Scotland. Whether they come from the Highlands, the Lowlands, Campbeltown, or the surrounding islands, an abundance of descriptors abounds for these multifaceted spirits: honeyed, spicy, floral. But the one word that is normally reserved for only a select group of single malts is smoky. Not slightly smoky, or smokelike, but unequivocally smoky, as in a smoldering campfire or a fireplace chimney.

Smoky is interchangeable with peaty when used in the context of Scotch whisky, and usually relates to a distillery’s practice of drying malted barley over a peat fire, allowing the resultant smoke to rise through and permeate the barley itself. Peat, it should be noted, is the compacted fossilized remains of prehistoric plant life; for years it was used to heat homes in Scotland. It is dug up, cut into small pieces, dried, and then used by a select number of distilleries to give their whiskies a smoky essence.

Although smoke is a characteristic that can be found in numerous—although not all—single malts, that lone descriptor is universally shared by single-malt whiskies distilled on the Scottish islands, most notably Islay (pronounced EYE-lah), a windswept, rain-lashed, fog-shrouded island off the southwestern coast of Scotland. Here the ground is largely composed of peat, which is so predominant that it permeates the groundwater: Even though the water is treated and filtered, it runs brown out of household taps, and taking a bath often leaves one with a whiff of smoke.

Of the eight distilleries on Islay, those that produce the smokiest whiskies are Laphroaig, Lagavulin, and Ardbeg. All three are located in proximity to each other on the island’s southern coast, where saltwater spray and ocean waves slap against the warehouses in which their barrels are aged. As a result, the whiskies from Laphroaig posses an unmistakable aura of seaweed-soaked smoke laced with iodine. Of all the distillery’s bottlings, Laphroaig 10 Year Old Cask Strength, at a thundering 117.2 proof, is by far the most powerful dram as well as smokiest.

For its part, Lagavulin 12 Year Old Cask Strength—a limited annual edition (currently released at 112.2 proof) —is far smokier than the highly acclaimed Lagavulin 16 Year Old, which at 86 proof is much more controllable and permits the distillery’s usual sweet, smoky characteristics to come through. However, Islay’s unabashed Sultan of Smokiness in an unlimited offering is Ardbeg 10 Year Old, which boasts 50 to 55 part per million (ppm) of phenols, chemical compounds that influence taste. To really smoke out your palate, try searching for the few remaining bottles left in stores of Ardbeg Supernova, which was released in 2010; it contains an almost overpowering 103 ppm of phenols. After sampling these rollicking drams, you might want to crank down the intensity a bit with the gentler smoke of Caol Ila 12 Year Old from the eastern coast of Islay. Or try the full-bodied Talisker 10 Year Old—which has a relatively soft whiff of smoke that comes from medium to heavy peated barley—from the only distillery on the Isle of Skye, which lies off the northwestern coast of Scotland. (www.laphroaig.com, www.malts.com, www.ardbeg.com)