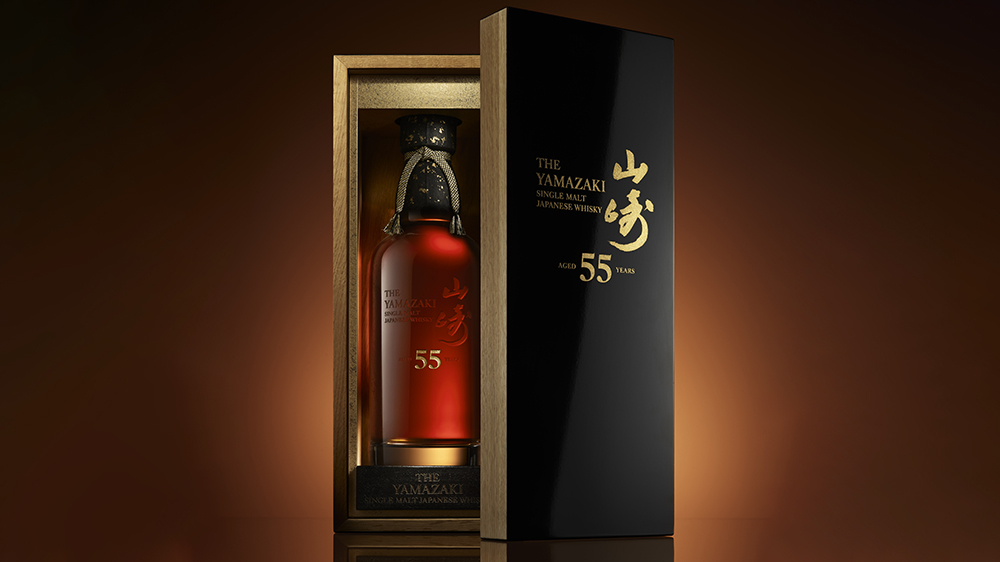 Last night, Japanese whisky powerhouse Suntory hosted a dinner for its Yamazaki brand at the ultrachic Stephan Weiss Studio space, in New York City, at which brand ambassador and emcee for the evening’s festivities Gardner Dunn promised “a few surprises.” That was, as it turns out, a bit of an understatement. Not only did acclaimed chef Nobu Matsuhisa make a surprise appearance as the talent behind the evening’s incredible five-course dinner, but Suntory chief blender Shinji Fukuyo joined from Japan, via videoconference, to personally lead a tasting of the brand’s 12-, 18- and 25-year-old single malt expressions. But the real fireworks were still to come.

They arrived in the form of small, sealed vials, individually wrapped in black velvet bags, which contained a dram of the oldest release in the history of the House of Suntory, the Yamazaki 55. Only 100 bottles, priced at a suggested retail of $60,000 each, will be released. As far as “wow” factor goes, it was hard to top.

The Yamazaki 55 includes three main components that, taken together, span all three generations of Yamazaki master blenders, starting with Suntory founder Shinjiro Torii, considered one of the founding fathers of Japanese whisky. The first, distilled by Torii in 1960, was aged mostly in mizunara oak casks; the second and third single malts were distilled in 1961 and 1964, respectively, by Suntory’s then-master blender Keizo Saji, and aged in American white oak. Tying the package together and bringing the project full circle, the trio of whiskys were selected and blended in 2020 by Shingo Torii, grandson of Shinjiro and Suntory’s current master blender, in partnership with Fukuyo.

Tasting very old whisky is always a bit of a trip through history. Since spirits don’t age in the bottle, as wine does, you’re tasting an idea as much as a liquid—in this case, a glance back in time to the whisky-making notions of Shinjiro Torii and Keizo Saji, but brought to life through the modern blending artistry of Shingo Torii and Shinji Fukuyo. And the Yamazaki 55 is lively indeed, vibrant both in the glass—it has a light and lovely amber blush, thanks to the mizunara—and on the nose, which bursts with aromas of ripe mango and sandalwood (another mizunara hallmark) before giving way to earthier notes of wet pine. Suntory served its 55 in a burgundy wine glass, and it’s clear why: You could spend as much time nosing this single malt as tasting many others.

The first sip is a shock—soft and rich, almost rum-like in its sweetness, which transitions beautifully into Yamazaki’s characteristic tropical fruit notes. Then a slightly bitter nuttiness with strong hints of smoked wood leading into a long, lingering finish, sweet and lightly smoky. It’s an incredibly complex sip, with flavors dancing up and down the register like musical notes across a page and a finish with length and force enough to rival a standing ovation. It is, in every sense, a statement whisky.

The Yamazaki 55 will be presented in a crystal bottle with the Yamazaki named engraved in sand-blasted calligraphy featuring gold dust and lacquer, delivered in a box of Japanese mizunara wood coated in Suruga lacquer. The bottle also features traditional Japanese crafts such as washi paper, on its opening, and a Kyo-kumihimo plaited cord from Kyoto, where Yamazaki is based.