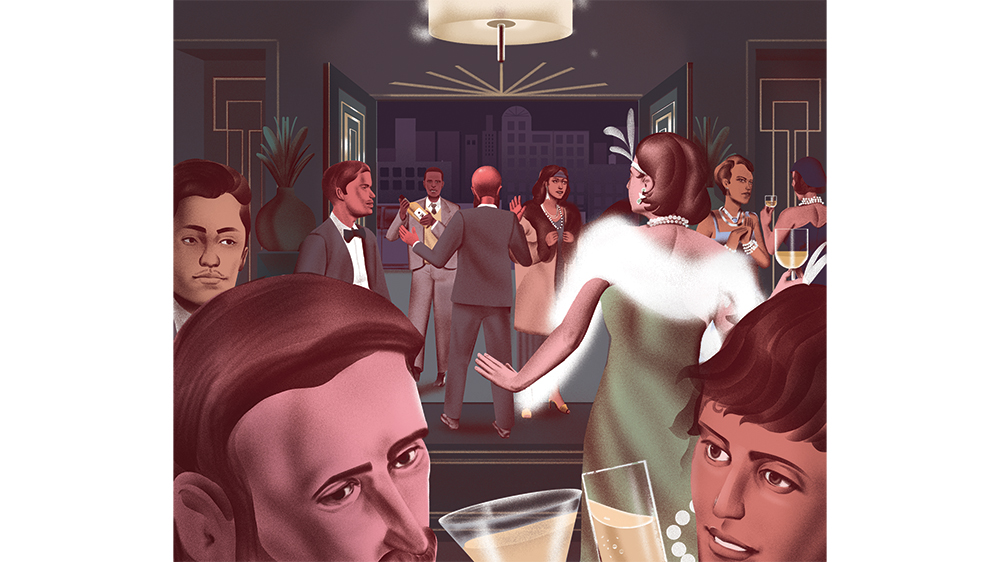 Illustration by Richard A. Chance

Whether it’s the 1920s or the 2020s, as party season commences, a timeless question remains: What bottle of wine should you bring your host?

Plenty of practical considerations arise while mulling your pick. How much should you drop? Pitfalls lurk at both extremes—too little and you’re a cheapskate or not doing as well as everyone thinks; too much and you risk showboating. Try to target the range the host typically drinks and serves. And if you don’t know, scan their Instagram posts or chat them up about recent bottles you both enjoyed to glean some intel. Then there’s the moment of the exchange: Will the bottle be uncorked or carted away to the cellar? Say buh-bye to your secret wish to taste the wine that evening; once you’ve handed it over, it’s the host’s—their choice. You could hint that if poured tonight it needs some time in a decanter, but don’t count on a sip.

Beyond the etiquette pointers, what about the actual bottle? Think in archetypes. We looked to the great partiers of the Jazz Age—the jock, the flapper, the heiress and others—and what they might have wanted to drink if they were around to enjoy our completely delicious (and legal) options today.

In the 1920s there was new money to be made on the fringes of growing industries from oil to real estate to even the birth of Hollywood. The speculators thrive on big risk, big reward and living large—and they’re not afraid to show it.

With only three barrels of this wine in the world, blended from some of Napa Valley’s most revered vineyards (Beckstoffer To Kalon, Dr. Crane, Las Piedras)—and with “magnificent” right there in the name—this is the bottle for someone living large and looking to invest. Dark, complex and minerally aromas layer tobacco, cedar, forest and savory herbs with soaring florals, cassis and briary blackberries seasoned with exotic spices. Lush, velvety fruit follows berry liqueur in seamless balance with silky tannins. This one is rich and spellbinding. ($450)

Located high on the ridge between Napa and Sonoma, Immortal’s steeply sloped estate vineyard falls on the Sonoma side of the line. That’s a good thing: Rising from 1,100 to 1,700 feet, the vines enjoy cooling ocean breezes from the west (which never quite make it into Napa), stretching the growing season—hence good acidity, complexity and mature tannins. Spice and licorice open, with briary blackberry aromas, high-toned floral notes, dried herbs and a smoke box character emerging just behind. Deep and textured fruit flavors—more blackberry and cassis—deliver against a balance of plushness and tension, freshness and serious structure. ($303)

There’s a steeliness beneath the stateliness, but she’s more than willing to indulge her softer, refined side. You’ll find her on the white sofa sipping Chablis or vintage Champagne.

Laroche won’t be a stranger to Chablis lovers, but few know the producer is one of only three owners in this exclusive premier cru vineyard. Coming from Laroche’s coolest valley site, the Chardonnay is complex, intense and vibrant. A layer of oyster shell, a spritz of lemon, hints of white flowers and a whiff of ocean breeze swirl in the glass, before a sip offers up juicy apple, more creamy lemon (brightened with a touch of orange zest), and savory veins of herbs, salinity and minerality. There’s pinpoint balance here between ripeness and pure vibrancy. ($57)

Named for the Greek Goddess of day and light, Champagne Henriot’s 100 percent grand cru, half-and-half blend of Chardonnay and Pinot Noir—aged for a minimum of 12 years on the lees—is a worthy sip for someone of the heiress’s stature. Pale gold and radiant, it opens with notes of fresh brioche, a sachet of dried petals and warmly spiced apricot compote wound together by hints of salinity. The palate is vibrant by contrast—rich but delicate. With flavors of stone fruit, preserved lemon and keen minerality overlaying a silky structure, this bubbly is dry and persistently fresh for all its years on the lees. ($172)

This big man or woman on campus is bold, affable and eminently likeable. They value past teammates even as they embrace the new ones and always have an eye on the next chance to win.

Last made in 1969 by the Joe Heitz of legend, Lot C-91 is a blend from across the winery’s vineyards. It sees a little less oak than the wines Heitz designates from those single sites—nine months in large neutral vessels, then two years in new oak—with fresher results. This is a Cabernet that’s light on its feet in spite of its density. A classic nose unfolds with cedar, spice and a touch of forest under dark berries and cassis. Raspberry joins the party on a lively, beautifully balanced palate sporting a welcome layer of savory, resiny herbs. ($100)

What does a former NFL great do to mark his induction into the Pro Football Hall of Fame? Make a special-celebration Cabernet, of course—because he’s Charles Woodson and now a passionate vintner on California’s Central Coast. Dark berries and cassis open, along with mocha, damp earth, cedar, forest botanicals, baking spice, violets and a touch of flint. Sweet, juicy berry flavors follow, with more herbs and anise, in a ripe but savory balance. ($150)

Thoughtful, imaginative and given the gift of an observant eye, poets are willing to look a little outside the mainstream to find what suits them best.

In 2014, in Washington’s tiny Red Mountain appellation, the Aquilini family—whose history of success runs through agriculture, construction, entertainment and hospitality— planted 59 acres with the vision of making great Cabernet Sauvignon. This first vintage of their top-tier Eroe, blended from the four best barrels off that vineyard and aged for 28 months in French oak, reflects both the power Red Mountain is capable of and the pedigree of iconic winemaker Philippe Melka. Inky and compelling, the wine opens with sexy layers of mocha, cedar and graphite under cassis and black cherry liqueur. Plush textures disguise the bold tannins of the region, while forest and minerals add complexity to that dark cherry fruit. This might be one to suggest for a splash into a decanter. ($175)

This concentrated but thoroughly elegant Cabernet comes from brothers Georges and Daniel Daou, producers of some of the best Bordeaux-style wines on California’s Central Coast. Dense aromas of cassis, mocha and spiced blackberry are sandwiched between earthy loam below and hints of florals above. A savory character underlies plush textures that disguise an impressive structure. A layer of earthy minerality balances cassis, blackberry, dark plum, anise and espresso. ($150)

With glamour, creativity and an irrepressible vitality, the dancer appreciates a good story as well as the artistry and discipline behind any big performance.

Not just a single-vineyard selection but also a single (aszú) berry selection, this exquisite Tokaj—made only in the best years (just eight times so far this century)—comes from one of just two Great First Growth vineyards in Hungary. It’s nectar of the gods. Spiced jasmine, honeyed apricot and hazelnut give way to rich and vibrant flavors of peach and pear—delicate and fresh for all their sweetness and botrytis complexity (the “noble rot” behind the likes of Sauternes). ($223)

The movieworthy story of Robin and Andréa McBride—sisters who grew up continents and hemispheres apart without knowing of each other—came together in a dream of making wine, at first accessible and affordable. Now they’re making what they both love: a reserve Chardonnay and Pinot Noir. The Great Escape Chardonnay throws a smidge of shade on big, over-oaked versions of the grape. It’s fresh, lifted and beautifully aromatic, with lemon blossom, juicy green apple and hints of crushed rock on the nose. Bright acidity marks a clean, refreshing palate, with white nectarine peeking out from behind the apple. A hint of roundness comes from restrained, rather than exuberant, oak. ($40)

A young, fun striver in pursuit of the next big party, the flapper has a taste for the grand, whether or not that includes old-world charm and pedigree.

New from the PlumpJack Collection (which includes Cade and Odette Estates), Adaptation offers connections a striver would love—owners that include billionaire Gordon Getty and California Gov. Gavin Newsom, plus winemaker Jeff Owens, whose very first release of Odette scored 100 points from Robert Parker’s Wine Advocate. And from their connections comes fruit from vineyards around the valley that rarely makes its way into wines at this price. The inviting nose is balanced between earth and fruit, spice and flowers, with hints of mocha, cedar, vanilla and savory herbs. Velvety tannins carry concentrated blackberry liqueur and juicy plum and cassis, with a kick of orange peel. This one’s punching way above its weight. ($70)

Historic BV—known for its iconic Georges de Latour and legendary oenologist André Tchelistcheff, widely considered the father of modern California winemaking—hadn’t released a new wine since 1990, until now. This inaugural vintage of Rutherford Reserve opens exactly as it should, with telltale notes of that powdery loam that Tchelistcheff dubbed Rutherford dust. Violets, blackberry and cocoa are faintly spiced with anise and cloves, leading into appealing cassis and black raspberry flavors on a smooth, generous palate balanced by a savory mineral character and pleasantly grippy tannins. ($80)