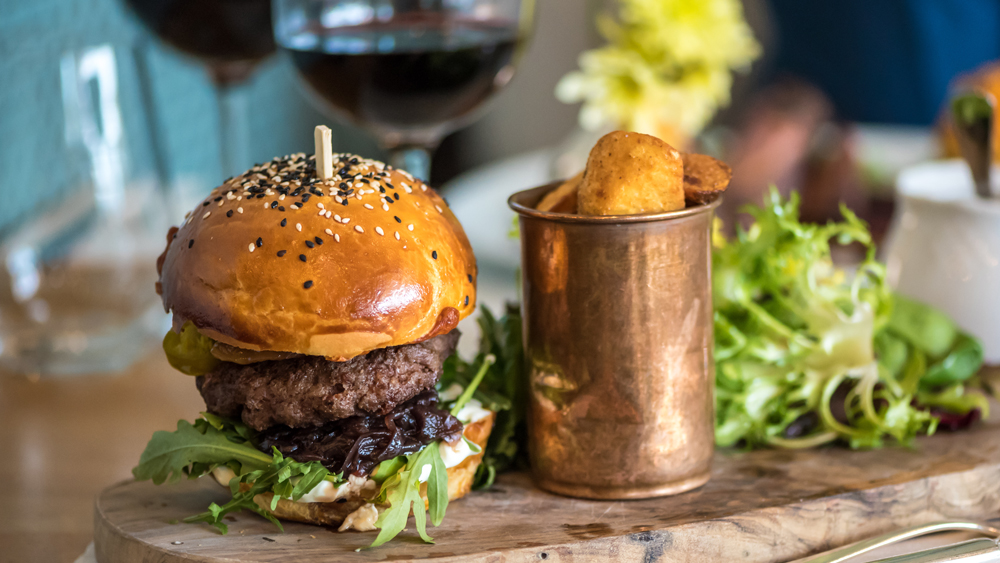 Where is it written that your Tuesday night wine should be cheaper than your Saturday night bottle? That a steak in the dining room deserves a better pour than a burger on the grill? As is true for so much other long-held wine “wisdom,” it’s high time to retire that “pour any old thing with a burger” notion. Take the trouble to source pedigreed meat (grass fed, or maybe beer fed and massaged), grill it just to rosy perfection, and pile it high on a gourmet bun with precious produce, pickled bits, and exotic condiments, and every messy bite deserves a sip of something spectacular. Add in the truth that well-structured Cabernet Sauvignon is beef’s best friend—in any form—(yeah, I know, that’s an old saw too, but it also happens to be true), and Google Maps starts navigating toward Napa. Specifically, to the mountains flanking the valley proper, known for producing complex, dark-fruited, deeply structured Cabernets.

It was high atop one of those mountains (Howell) that I found my new favorite burger wine this week. Working with viticulturist Michael Wolf, consulting winemaker Philippe Melka, and winemaker Alberto Bianchi, vintners Denise and Stephen Adams are coaxing serious beauty from their wildly diverse, biodynamically farmed Adamvs Estate, comprising 80 acres, with 27 under vine. It was Melka (French-born winemaker extraordinaire, and a soils expert by training) they called in to walk the property when it became available back in the aughts. And in the range of elevations (1,500 to 2,000 feet), myriad aspects and exposures, and five distinct volcanic soil types, from iron-rich red to white ash, he saw the potential for great wines. And not just one: he advised them to make three reds, to fully express the specifics of geology and geography. And he said he would make them.

The Cab from Adamvs goes great with your gourmet patty.  Robert Holmes

The one that became my burger wine this week? The 2016 Adamvs Quintvs Cabernet Sauvignon Howell Mountain ($220). Named for its broad expression of all five of the estate’s distinct soil types, the complex, structured Cab is balanced on the nexus of a serious backbone of tannin and plush, juicy fruit. High-toned aromatics unfold on the nose—violets over forest floor, graphite wrapped in lavender and spice. Distinct, savory minerality and wild herb notes give a hug to grass-fed beef, while mint-inflected blackberry and plum flavors are juicy enough (a result of the fresh acidity the cooler mountain elevation retains) to be a lively foil for challenging burger additions, from bacon to melty cheese.

As you might expect, there’s a story in the winery name, but only tangentially related to the fact that it contains the name of the Adams themselves. In Latin, according to Denise Adams, Adamvs means “born of our red earth.” And chug up to the top of the property in either a 1961 or a 1967 Land Rover—which you will do if you visit; the model will depend on which one is working at the time—and the vibrant red earth is visible between vine rows.

In fact, more was born of this land than the brand name. The Adams started from scratch in building a new tasting room and winery, and they challenged San Francisco–based architect Kurt Melander to find inspiration on the property for the space where they would host guests to taste their wines. His meanderings (there was a lot of property walking by talented people in those days) produced Cyprus trees—fallen ones all over the place, he reported—and he proposed a hospitality center with that in mind. But, but, but … “I don’t want a log cabin!” objected Denise Adams. Final plans, though, won over her art major heart. The Cyprus House is a stunning, cantilevered glass structure jacketed by cross sections of Cyprus trunks, with an artful, historic agricultural shed roof floated over the top. “It’s like being inside a sculpture!” according to one guest on record.

Such a modern take on wine hospitality might seem anomalous to vintners like the Adams, for whom this is their second estate. The first is in Bordeaux’s Right Bank Saint-´Emilion: the Grand Cru Classé Château Fonplégade, which they painstakingly restored. But moving back and forth between the properties and cultures seems symbiotic to Denise Adams. Their teams on both sides of the pond have exchanged visits, and the conversion of their Napa Valley farming to biodynamic (a natural, as the property was already organically farmed when they purchased it) helped inform and convince the French vineyard team to convert there (although Adams reports that she signed a firm waiver taking full responsibility for results at the time).

I digress from my burger … Visit Adamvs (open by appointment to members and potential ones), and you will taste the wines with a beautiful tray of charcuterie and homemade goodies. (The biodynamic property produces honey and jams.) But when it comes to the 2016 Quintvs, my money’s on taking a bottle home for your next cookout. And from a distance? Yes, there’s a waiting list, but I have it on the best authority that it’s not very long at all. You might still catch a late-summer burger.