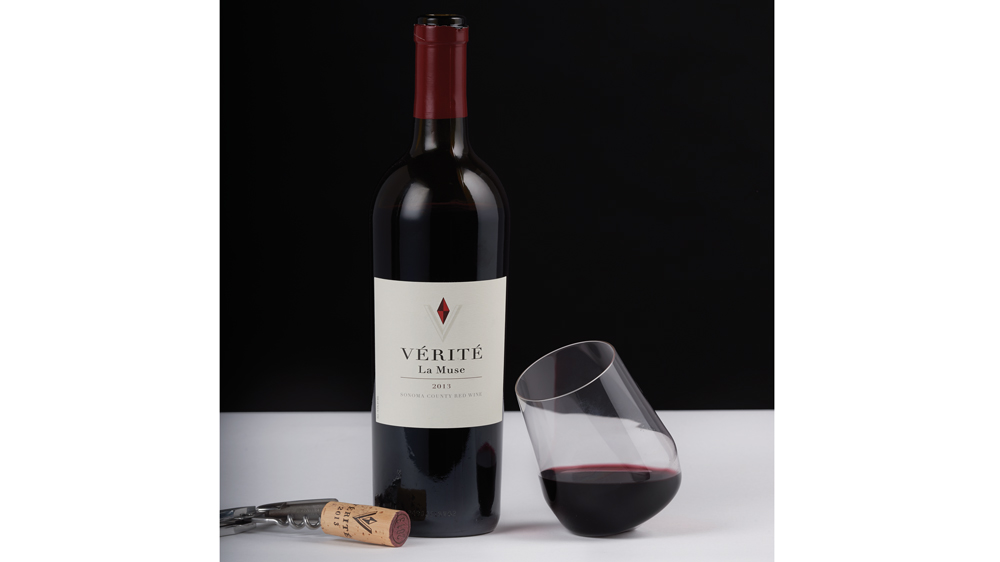 Vérité 2013 La Muse
Years ago, when we first encountered a Bordeaux-style red wine from California just introduced by Jess Jackson and Barbara Banke, we were astonished by its velvety texture and flawlessly articulated structure. Indeed, the only flaw to this compellingly dark gem was the vintage, 1998, which critics had recently condemned in Napa Valley and Sonoma County. But wines, like people, should not be judged too quickly: Jackson’s wine, Vérité—created in collaboration with a French winemaker named Pierre Seillan— has outlasted many vaunted 1997 releases, and Wine Advocate founder Robert M. Parker has since awarded perfect scores to 13 of the label’s releases.

Vérité derives its uniqueness from two sources: the vineyards, of course, and the vigneron entrusted with making it. Jackson and Banke assiduously acquired the high-​elevation Sonoma sites with an eye toward their microclimates and uncommonly complex soils, which recalled those of Bordeaux. When Seillan, who apprenticed in California during his youth, saw the properties in question, he was inspired by the prospect of blending wines from a wide range of appellations—something that regulations prohibited in Bordeaux.

Few winemakers have the patience to farm and vinify at the exacting level Seillan does. He harvests small blocks, or crus, crushes and ferments the fruit, and ages the resulting wine in tiny batches, each of which becomes a shade on his palette once the blending begins. The difference between skilled craft and artistic virtuosity is apparent in the 2013 vintage, arguably the best yet for Vérité. Of the three wines produced under the label, La Muse—a Pomerol-style mélange of Merlot with a small amount of Cabernet Franc and a touch of Malbec—shines brightest. Its aromas of lilac, violet, and cherry, combined with profound flavors of black currant, blueberry, licorice, and wild mushroom, delineate a sensory landscape as lovely as those on which the fruit was grown ($390).

Eminent Domaine 2014 Reserve Pinot Noir Ribbon Ridge
Adversity sometimes yields opportunity—at least, this was the case for Jeff Meader and his wife, Heather. The couple, who owned an office building in Portland, Ore., found themselves on a frustrating path when government entities laid claim to their property for a public project. After emerging from a long legal fight with city hall, the Meaders determined to invest the proceeds in a worthy plan of their own, purchasing 7 acres in the state’s Ribbon Ridge appellation. Eminent Domaine (the name alludes both to the legal device that triggered these events and to their new investment) specializes in small-​production Chardonnay and Pinot Noir. This stellar Reserve Pinot achieves an admirable balance between New World exuberance and Old World restraint, releasing aromas of fresh daisies, blackberry, and tea. The finish shows exceptional length and precision ($55).

Shafer 2012 Cabernet Sauvignon Hillside Select Stags Leap
“West or bust” was the mantra of 19th-century settlers in search of a better life; yet for Chicago-based publishing executive John Shafer, this refrain remained as relevant as ever in the early 1970s. Drawn to the California wine industry, Shafer moved his family to Napa Valley, where he bought a parcel of hillside property in the Stags Leap District, whose volcanic soils and southwesterly exposure convinced the aspiring vintner that, with some sweat equity, great Cabernet Sauvignon could be made there. Shafer’s son Doug invested a fair amount of his own perspiration in the fledgling enterprise, and together they created one of Napa’s most collectible Cabernets, Shafer Hillside Select. The 2012 vintage is a classic rendering of this wine’s rich style, evoking concentrated notes of black and red fruit, vanilla, licorice, and coffee wrapped in a silk-smooth texture ($265).

Saxum 2013 Booker Vineyard Paso Robles Willow Creek
When Justin Smith undertook a new venture, Linne Calodo Cellars, in the late 1990s with his friend Matt Trevisan, their mission ran contrary to the pursuits of many colleagues in California’s Paso Robles region. At that time, this semiarid area of rolling hills on the state’s Central Coast was devoted mainly to the cultivation of Zinfandel and the Bordelais varietals that had made Napa Valley a force to reckon with in international circles. The friends had the then-roguish notion of producing wines using Rhône grapes, such as Syrah and Mourvèdre. Since establishing his own label, Saxum Vineyards, with his wife, Heather, Smith has been recognized as one of the leading talents of the region, now renowned for its Rhône-style releases. This powerhouse from the Booker Vineyard pleases and prods the palate with ripe blackberry and subdued, earthy flavors of mocha and cured olive ($98).

Two Vintners 2013 Some Days Are Stones syrah Stoney Vine Vineyard Walla Walla Valley
Love triangles do not generally end happily, but the case of David Lawson, Cindy Lawson, and Morgan Lee provides a happy exception. The Lawsons’ passion for wine began with Cindy, who instilled in David a similar appreciation. As his interest grew, David enrolled in oenology courses, and in 2002 the couple established Covington Cellars in Washington State, concentrating their program on the production of primarily Sangiovese and Cabernet Franc. As this concern grew, they took on an enthusiastic assistant winemaker, Morgan Lee, who partnered with them in a second label, Two Vintners, which produces exceptional Syrah and Merlot. This flavor-packed, single-vineyard Syrah marries a soft, velvety texture with dense flavors of black plum, tobacco, smoked meat, clove, and orange zest ($45).