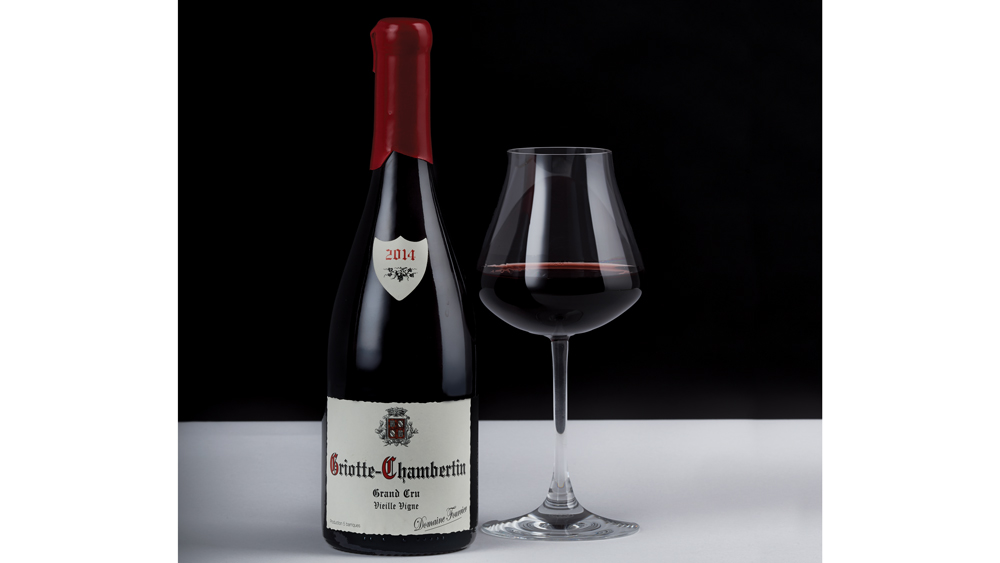 Domaine Fourrier 2014 Griotte-Chambertin Grand Cru Vieille Vigne
This beauty takes the prize as our favorite red wine of the year. From the moment this Burgundy first touches the lips, it reveals its special character—something to be expected from the storied domaine, originally formed by Fernand Pernot in the early 20th century as Pernot-​Fourrier. The domaine passed to his nephew, Jean-Claude Fourrier, in the late 1960s, but this respected producer in the Côte d’Or has particularly flourished in the capable hands of Jean-Marie Fourrier, who took over operations in 1994 at the age of 23. Jean-Marie was trained under the all-time king of Burgundy, Henri Jayer, in the late 1980s and has attained his own distinct style of greatness, imposing meticulous practices in the vineyard and an artisanal approach in the winery. Located in the commune of Gevrey-Chambertin, the Griotte-Chambertin vineyard is especially blessed—as is the domaine’s portion of this land, which contains old vines planted as far back as 1928. From this source, Jean-​Marie extracts a wine of unparalleled depth. Domaine Fourrier always delivers refined and elegant reds that combine force with focused structure and silky tannins, but this dark-crimson Griotte-Chambertin surpasses its siblings, unfolding with the deep scent of violets and an intense blackberry flavor. The wine is difficult to come by; the vines cover just under two-thirds of an acre. But those lucky enough to stash away a few bottles in their cellars will discover that this fantastic Fourrier will pay dividends in the decades to come. Distributed through the Rare Wine Company ($1,000).

Vietti 2013 Barolo Ravera
The 2013 Ravera is hands-down the Barolo of that vintage—liquid evidence of this historic winery’s artistic prowess and depth of experience. The Vietti family, after all, have been pioneers in Piedmont since the early 19th century. Alfredo Currado, Luciana Vietti’s husband, was one of the first in the region to select and vinify grapes from single vineyards. This concept was revolutionary at the time, in 1961, but today virtually every winemaker producing Barolo offers single-vineyard expressions. Made from 100 percent Nebbiolo and aged for 30 months, the Ravera is a classically styled, mid-bodied red whose focused precision and startling aromatics contrast piquantly with its robust structure and prominent tannins. Built to age, this Barolo represents an epiphany in a bottle and should be required drinking for every connoisseur worthy of the name ($175).

Château La Fleur-Pétrus 2012
Like no one else in his profession, Christian Moueix has mastered not only the art of flawless winemaking but also the art of multitasking. He has managed several of his family’s estates for more than 30 years, including iconic properties in Pomerol and Dominus Estate in California’s Napa Valley. One likes to think that Château La Fleur-Pétrus holds a special place in Moueix’s heart, because this was the first property that his father purchased, in 1950, and today it remains one of the most prized estates in Bordeaux. The château has a long-established history of rendering incredible blends vintage after vintage—a reputation it has upheld for hundreds of years. Now under the guidance of Christian’s son, Edouard Moueix, the château’s releases are better than ever. Edouard’s 2012 La Fleur-Pétrus is pure pleasure in a bottle. This Merlot-driven creation is remarkably approachable for a Bordeaux so young, yet it is superbly age-worthy. Although we continue to be ardent fans of all the Moueix family’s work, Château La Fleur-Pétrus certainly holds a special place in our hearts ($180).

Tenuta San Guido 2013 Sassicaia
Tenuta San Guido Sassicaia is widely regarded as the most important wine in Italy. One taste of the 2013 vintage reaffirms this distinction. A blend based on varietals from Bordeaux planted in Tuscan soil, Sassicaia was originally produced in 1948 by Mario Incisa della Rocchetta solely for consumption by his family and friends. After experiencing the remarkable character of this unusual red, Incisa della Rocchetta’s nephew, Piero Antinori, urged him to release it commercially. Happily for oenophiles, Incisa della Rocchetta took his relative’s advice. When this wine reaches maturity, it will easily rival the 1985 and 1988 vintages—and may indeed surpass them. That the 2013 should have attained such a high mark of quality is particularly fitting, as the Italian government that year granted the estate its own controlled designation of origin (Bolgheri Sassicaia D.O.C.)—the only such property in Italy to enjoy that privilege ($185).

Dominio de Pingus 2013 Ribera del Duero
Dominio de Pingus was founded in 1995 by the Danish oenologist Peter Sisseck (“Pingus” is Sisseck’s nickname). Today the label releases Spain’s most expensive wines, and for good reason: The winery’s red blends are among the most delicious found anywhere in the world. Planted with ancient vines of primarily Tempranillo, the site typically produces less than 500 cases a year. Sisseck has stated, “The vines in my plots are very old. They have never been fertilized nor treated with pesticides, and all grow following the traditional en vaso system. They are perfect.” We could not agree with him more. The 2013 vintage achieved a true victory over Mother Nature, being composed of grapes that not only survived but excelled during a fascinating but perilous growing season. Delicious, fresh, and elegant, this wine possesses a charm that even the most jaded palate will be unable to resist. Pingus continues to set the benchmark for greatness in Spanish viticulture. Distributed through the Rare Wine Company ($1,050).