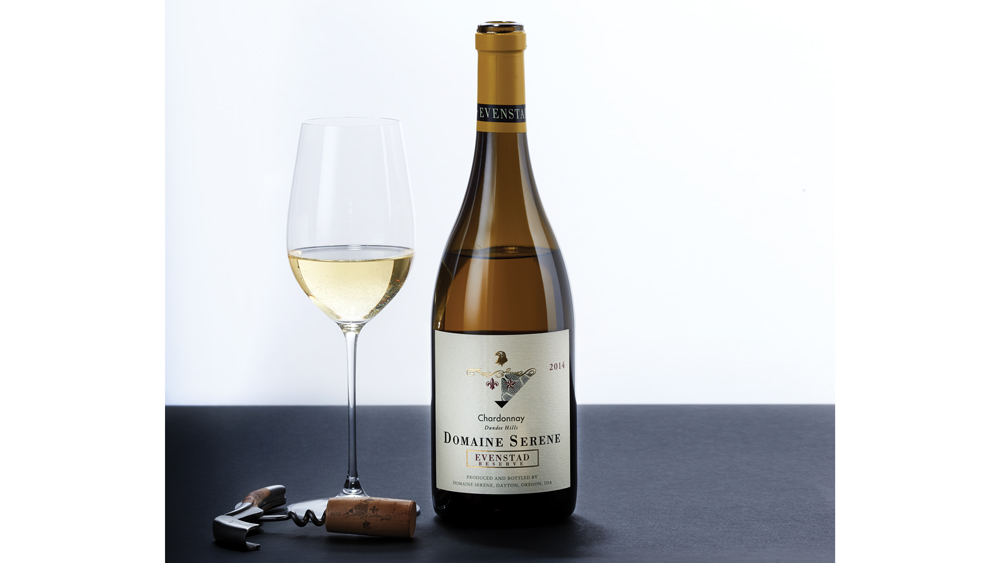 Domaine Serene 2014 Chardonnay Evenstad Reserve Dundee Hills
Although western Oregon is often likened to Burgundy, Grace Evenstad—cofounder, with her husband, Ken, of Domaine Serene—maintains that the region is not typically the place for Chardonnay. “In 1989, when we went to Oregon to buy some land,” she says, “our passion was Pinot Noir. At the time, Chardonnay in Oregon was not very good. We didn’t have the plant material available to us for a cool growing climate. So very few people were making Chardonnay.”

Thus, Evenstad and her husband pursued their Pinot program, achieving widespread recognition for their part in helping to elevate the quality of wines from the Willamette Valley. Only by chance did Chardonnay enter the equation. “We learned from a neighbor of ours that there were some Chardonnay clones from France that were suited to a cold climate,” recalls Evenstad, “and he started working with them. In 1997 he sold us his property, which bordered ours. He had these Dijon clones of Chardonnay from Burgundy planted, and suddenly we found ourselves making Chardonnay. And we loved it.”

The secret, Evenstad notes, is the combination of the right clones at high elevation in Jory soil—Oregon’s rust-colored, volcanic earth. This recipe lends the Evenstad Reserve Chardonnay its extraordinary profile of deep floral and white-fruit essences supported by profound minerality and steely acid. The 2014 vintage is a particularly opulent expression, dispersing notes of orange blossom, creamy mango, and key lime across a stupendously sustained finish ($55).

Gloria Ferrer 2005 Carneros Cuvée Late Disgorged
Although Gloria Ferrer Caves & Vineyards measures its tenure in Sonoma County in decades, having opened its doors in 1986, its founder, José Ferrer, traces his family’s history as winemakers in Spain back to the 16th century. His parents, Pedro Ferrer and Dolores Sala Vivé, united their families’ viticultural operations around sparkling wine in the 1910s to found Freixenet, one of the largest producers of Cava. José brought this tradition to the New World, purchasing acreage in the Sonoma portion of Carneros. The estate offers a full range of still wines, but the sparkling wines continue to sparkle—especially this late-disgorged cuvée, which exhibits astonishing depth beneath its layered hints of apple, lemon sorbet, pastry, and poached pear ($75).

Tablas Creek 2015 Patelin de Tablas Blanc Paso Robles
A delicious Franco-American collaboration has made its oenological mark in Paso Robles, on California’s Central Coast. Tablas Creek is co-owned by local vintner Robert Haas and the Perrin family, proprietors of the storied Château de Beaucastel in the southern Rhône region. Both estates work with similar varietals and are progressive in their approaches to viticulture, but the styles of the wines differ dramatically thanks to their individual climates and soils. This energetic blend of Viognier, Grenache Blanc, Marsanne, and Rousanne evokes an exotic assortment of scents and flavors to savor, including Granny Smith apple, lemongrass, loquat, and white tea ($25).

Résonance 2015 Chardonnay Hyland Vineyard McMinnville
Since Robert Mondavi and Philippe de Rothschild partnered on their joint venture, Opus One in Napa Valley, important names in European viticulture have taken root in North American soils. One of these names is Maison Louis Jadot, the esteemed producer from Burgundy, whose new winery, Résonance—located in Oregon’s Willamette Valley—is the house’s first outside its native region. The project brought renowned winemaker Jacques Lardière out of retirement to oversee the development of the vinification program. This single-vineyard Chardonnay certainly justifies Lardière’s sacrifice: Resplendent with essences of candied citrus and lemon meringue, the wine delivers a finish that, despite the rich preface, washes the palate clean ($50).

Lasseter Family 2015 Rosé Enjoué Sonoma Valley
Technology brought Nancy and John Lasseter together, but the desire for a simpler way of life brought them to Sonoma County. John, the Academy Award–winning chief creative officer of Pixar Animation Studios, met Nancy, an engineer at Apple, in 1985 at a computer-graphics conference. The couple spent their honeymoon in Sonoma, and so it was natural that, in seeking refuge from their hectic careers and a place to raise their children, they should settle in the town of Glen Ellen—a different kind of industry town. The Lasseters soon applied their creative talents to winemaking, turning out inventive blends, both red and white. This rosé, a refreshing concoction of Syrah, Grenache, and Mourvèdre, conjures hints of raspberry, ripe summer peach, Indian spice, and sweet sandalwood ($28).