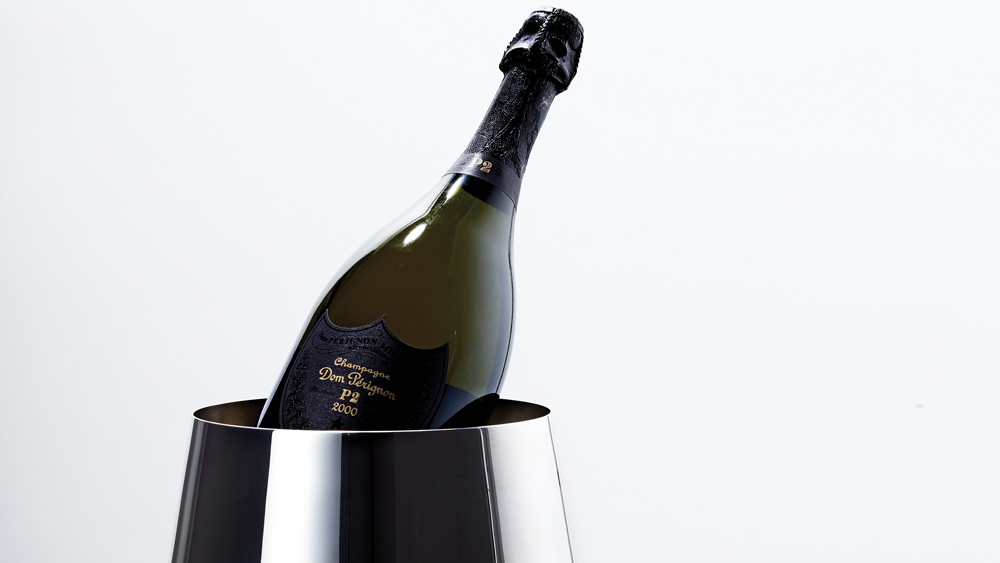 Dom Pérignon P2 Vintage 2000
There are few wines in the world that elicit an ecstatic response when placed on a table. Dom Pérignon counts among these elite labels and, for many, embodies in liquid form the very idea of luxury. This popular Champagne was named after Dom Pérignon, a 16th-century monk and cellar master who pioneered several winemaking techniques. He was the first winemaker, for example, to blend grapes to balance different elements of the wine, and he introduced cork rather than wood closures for his bottles. Today the esteemed house carries on that tradition of innovation through its current chef de cave, Richard Geoffroy, who created P2, or “second Plénitude”—a series of unique expressions of older releases of Dom Pérignon. “Each vintage of Dom Pérignon is disgorged and re-released only when I consider it has reached a new Plénitude—a privileged period of time when Dom Pérignon attains its radiance,” says Geoffroy. “Its development comes in successive plateaus, many windows of expression that I decided to call Plénitudes. The wine then tells us a story that is new and exciting enough to be worth sharing.”

Unlike the standard Champagnes from Dom Pérignon, the wines under the P2 moniker spend at least 12 years on the lees. This extra aging results in a silky, layered, deliciously rich sparkling wine with as many facets as a Fabergé egg. Dom Pérignon’s P2 Vintage 2000 is an incredible achievement and epitomizes the style and philosophy of the house—as well as the great terroir of the region ($400).

Joseph Drouhin 2014 Montrachet Marquis de Laguiche Grand Cru
The Montrachet of Marquis de Laguiche is practically considered a national treasure in France. The property has been in the hands of the Laguiche family since 1363. Through a handshake agreement, the Drouhin family has overseen its cultivation, vinification, and distribution since 1947; thankfully, the Drouhins have also continued to protect and grow the vineyard’s distinguished reputation. Known for producing wines of top quality, unparalleled flavor, and unbelievable age-worthiness, the Drouhins rendered another masterpiece in 2014. This wine, which clearly reveals the special Puligny soils from the vineyard, is sophisticated, pure, and precise. With its elegance, it will cellar phenomenally for 10 to 20 years and should top any list of leading whites ($850).

Château d’Esclans 2014 Rosé Les Clans Côtes de Provence
Château d’EsclansRosé? Yes, rosé. This bottling is more than a simple sip for the denizens of Nikki Beach in St. Barts. This pastel beauty proves once again that continues to produce the most age-worthy rosé wines in the world, and the 2014 is a perfect example of what a world-class rosé truly is. Graced with a light, silky texture and an outstanding focus on its impressively long finish, this elegant yet potent elixir of Grenache and Rolle can be enjoyed on its own or inventively paired with a wide range of foods. Its freshness and brightness tempt one to enjoy it now—especially in the warm months—but the wine will become even more seductive after a decade in the cellar ($80).

Château Haut-Brion 2013 Blanc Pessac-Léognan
When many of us think of Château Haut-Brion, we recall the incredible reds that are produced on this historic estate. However, the cognoscenti equally admire the superb white wine that comes from the dynamic team of Prince Robert de Luxembourg and estate manager Jean-Philippe Delmas. Together they have crafted an amazingly dense, explosive, supple, full-bodied, yet harmonious expression of Semillon and Sauvignon Blanc. With a core of mouthwatering acidity and vivacious flavors of apricots, white peach, and roasted almonds, the 2013 vintage is so layered and complex that, if tasted blindfolded, it might be mistaken for a red ($1,300).

Dönnhoff 2015 Riesling Oberhäuser Brücke Spätlese
Dönnhoff is Germany’s premier producer and has long been regarded as the master of Riesling. The 2015 vintage in Germany has already attained legendary status, and this particular release is one of Dönnhoff’s finest efforts to date. Produced with fruit from a single vineyard—the smallest in the Nahe Valley—this wine impresses with its fresh nature and precise aromatics. Round and luscious on the palate and balanced by sharp acidity, this powerhouse Riesling delights the taste buds. Although this prepossessing white drinks brilliantly today, patience and additional cellar time will surely be rewarded ($45).