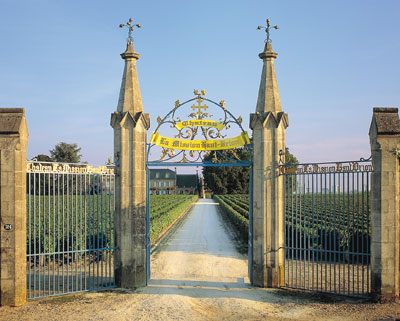 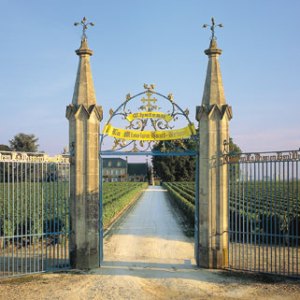 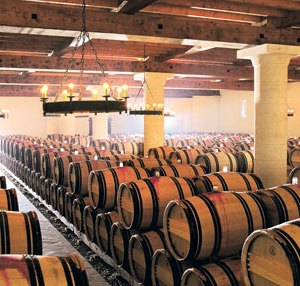 As one would expect of a property that has stood for more than 450 years, Château Haut-Brion, which was founded by the Pontacs, a wine merchant family, and was once owned by Talleyrand, Napoléon’s minister of foreign affairs, has endured various transitions over the centuries. By the early 20th century, the once-glorious estate was in debt and in disrepair. However, in 1934, American Francophile Clarence Dillon acquired Haut-Brion, and his fam­ily eventually restored it. Clarence’s son, Clarence Douglas Dillon, offered the wines of Haut-Brion as diplomatic gifts during his tenure as American ambassador to France (1953–1957). Since 1983, the Dillon family also has owned La Mission Haut-Brion (located just across the street from Haut-Brion), La Tour Haut-Brion (formerly a second wine of Haut-Brion but now revamped in a lighter style as its own label), and Laville Haut-Brion (a white wine–only property). C. Douglas Dillon’s daughter, Joan Dillon, the Duchesse de Mouchy, now serves as president of the company.

Haut-Brion’s latest transition involves its estate manager. Jean Delmas, who had threatened to retire a few years ago, finally did so last year. Delmas had been born on the property and succeeded his father as regisseur in 1961. During his long tenure he was almost entirely responsible for elevating Haut-Brion to its lofty status. His son, Jean-Philippe Delmas, has assumed the job of technical director and seems to be filling his father’s rather large shoes admirably.

Haut-Brion Blanc is as renowned as it is scarce, with only about 8,000 bottles available per vintage for a very demanding market. It is often regarded as the greatest white of Bordeaux, although Haut-Brion Blanc’s sibling, Laville Haut-Brion, sometimes equals and occasionally surpasses it. The white vineyards at Haut-Brion are planted to 63 percent Sémillon and 37 percent Sauvignon Blanc, a weighting that gives this wine its particularly plush combination of Sémillon-driven body and Sauvignon-influenced scent of musk. Haut-Brion Blanc ages beautifully.

The 2002 Haut-Brion Blanc is powerful and complex and never loses its finesse and purity of fruit. As it evolves, it will add notes of spice and nut meats, and, like past vintages, it surely will continue to mature gracefully for several decades.