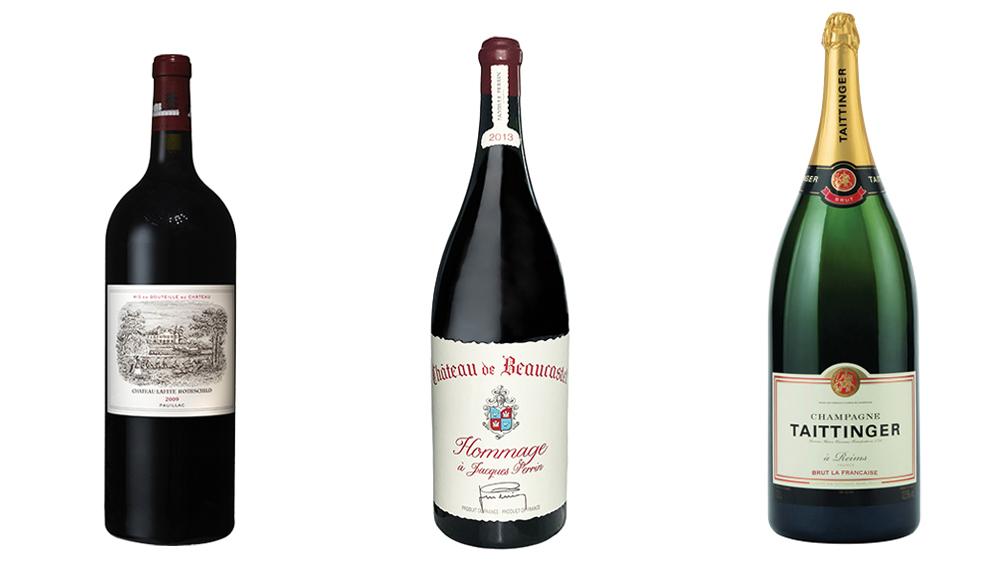 We all know that bigger tends to be better when it comes to the things we covet, be it a television, a home or a yacht. The same holds true for wine bottles, but it’s not just about the flaunt factor—there’s science involved as well. “The benefits of large formats go far beyond volume,” explains Michaël Peltier, senior fine-wine specialist at Millesima USA, which has the most expansive large-format library in Europe. “The ratio between the volume of wine in the bottle and the air between the wine surface and cork is much greater, so the oxygenation of the wine takes place at a much slower rate than in the standard bottle. This means that wines in large formats can age more gradually and for a longer period of time.”

Perhaps that’s why the big bottles have been so popular at auctions this year, including at the Naples Winter Wine Festival in Florida in January, Napa Valley Vintners’ Library Wine Auction in February and ongoing sales from Sotheby’s. As Jamie Ritchie, worldwide head of Sotheby’s Wine and Spirits, notes, “The market has continued to focus on [the] greatest and the rarest wines and spirits,” while, providentially, “the larger sizes are made in much smaller quantities than regular-size bottles.” In addition to normal production of 750 ml bottles and a few double-size magnums, wineries celebrating a special vintage may release only a couple of three-liter jeroboams—the equivalent of four bottles—or one Balthazar, which runs a full 12 liters, or 16 bottles of wine.

That means collectors around the world are picking up older big bottles, which generates interest in current release large formats. Lowered production in premier regions over the past several years has also fueled rising demand; both Bordeaux and Burgundy were hit with output-decreasing weather even as fires in the California wine countries of Napa and Sonoma damaged the vineyards of several top-tier producers in 2020. Some good news: New releases from Europe are now on ships headed for our shores and will be available for sale this spring and summer.

While some buyers view larger bottles of wine as merely an investment, others look for a more impressive pour. “A combination of the rarity of large formats and the fact that they’re celebratory [means] you can share them with more guests,” says Sotheby’s Ritchie. “People are ready and want to plan parties and have fun with their family and friends.”

Peltier, of Millesima USA, echoes that sentiment. “After the stress and isolation of the past two years, people are looking to enjoy life more again and celebrate great moments,” he says, calling large format bottles “perfectly suited” for grand soirées and “the occasions that mark the most special moments.” In other words: big bottle, big impact.

A Premier Cru from a legendary vintage, this Cabernet Sauvignon–based Bordeaux is the gold standard in magnums and perfect for sharing now—though under the right conditions, it will continue to mature gracefully for another 45 years.

Made only in years that favor varieties that ripen late in the season, this exquisite Rhône red is mostly Mourvedre, known for its long aging potential, blended with Syrah, Grenache and Counoise.

The ultimate party pour, this equals 80 glasses—ideal for a big birthday bash or even a small wedding. Compared to many of the large formats out there, this nonvintage bottling is a relative bargain.