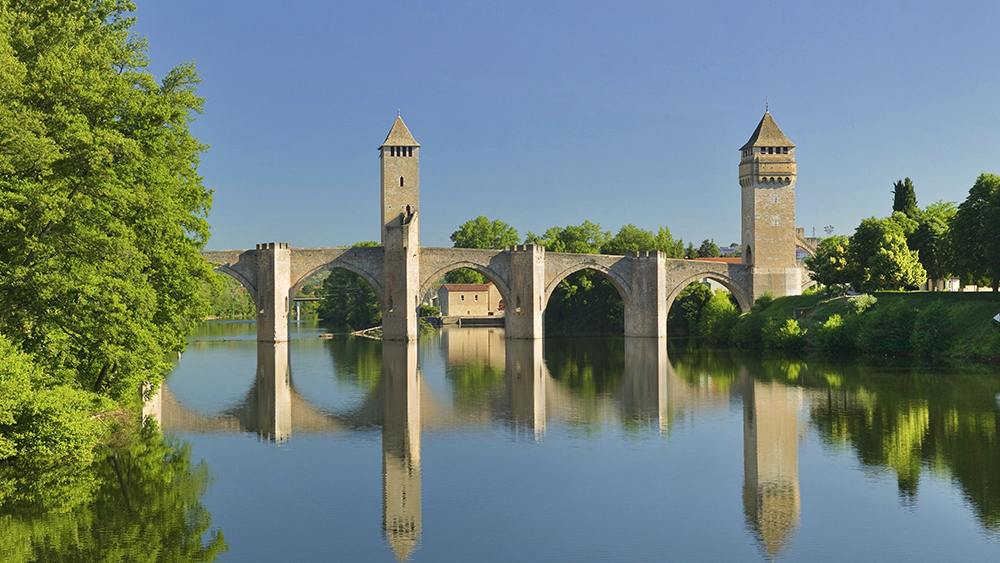 The wine in my first glass is inky, a dense, tooth-staining shade. As is the wine in the next glass, and the one after. I have more than 40 to “get through”—before lunch—a daunting task, if color can be trusted. It can: These are powerful wines. And to the last glass, they are all Malbec.

I haven’t jetted south to Argentina, which for the past decade or so has been generally recognized as the world’s primary source of great Malbecs. I am in Cahors, France, a region probably not on the tip of most wine lovers’ tongues. But it’s about to be. Today’s lineup of beautiful reds is more than enough evidence that now is the right time to discover Cahors, where castles are casual scenery, Michelin-starred chefs are working their magic with truffles and foie gras and a once forgotten wine has gotten very, very good.

Cahors aims to set the record straight: The Malbec variety of grape is, in fact, native to this relatively unknown region east of Bordeaux and west of the Rhône Valley, at a midpoint between the Atlantic Ocean and the Mediterranean Sea. It’s a relatively undiscovered slice of France, where life for centuries has derived from the land itself. Handsome 13th-century stone farmhouses dot the hills, and medieval villages are still equipped with street-level cellars that, in earlier times, allowed barrels of the hearty local red to be rolled down the cobblestones to waiting boats on the Lot River. Despite its bucolic charms and restored châteaux-turned-hotels, Cahors has remained largely under the radar.

Under France’s strict rules, Malbec is one of 10 varietals allowed in Bordeaux. It was a landowner there, a Monsieur Malbeck, who gave the grape its name at the end of the 18th century. (Historically, it had been called Auxerrois or Côt, its scientific name.) As it turned out, though, Bordeaux and Malbec weren’t an ideal match. Close to the Atlantic as it is, Bordeaux was too damp for the grape. Drier Cahors was where it thrived.

Handsome old burghers’ houses in the heart of the town that gave the region its name—guarded still by its 13th-century wall—attest to the wealth merchants acquired by sending the wine down the river, through Bordeaux, to port. The larger the cellar, the richer the man (and the more wine his family could drink in lieu of water). In an interesting twist, Malbec from Cahors came to be valued over Bordeaux’s own blends. With its heftier tannins, the wine hung in through long voyages and actually tasted more like itself when it reached far-flung ports. The Bordelais weren’t pleased. They were even known to discriminate, giving their own wines shipping preference. Still, they needed the tax revenue, and Cahors prevailed.

Fast-forward to the 20th century. We all have our unfortunate years, and through much of the 1900s, many of the wine growers here, who were also farmers more broadly, paid little attention— in wine terms—to the unique land they might be cultivating, nor did they take care in the cellar to manage the signature rambunctiousness of Malbec. They mostly sold their fruit to large co-ops producing cheap bulk wines with assaulting acidity. The best possible spin on those bottles was that they could age for years. But in truth, they never aged into elegance, just bare drinkability.

Enter a new generation of growers and winemakers (and a couple of famous outside consultants), who, instead of sending their harvests to co-ops, are making them into interesting wines in their own cellars. They’ve studied soil, microclimate, elevation and aspect. And they’ve used advanced techniques and technology to get the fruit a little riper in the vineyard and to extract a little more gently during the fermentation process, in the end producing more voluptuous, generously fruity wines. The acidity the grapes retain here (this is cooler Cahors, after all, not warmer Argentina) is now more asset than liability, creating lively, juicy wines. Textures these days run more toward velvet than rustic denim.

An old saying in France has it that “there’s no beautiful wine where there’s no beautiful river.” And in Cahors, the Lot multitasks, fulfilling the promise on both sides of the equation. Running from east to west, the river draws giant, scenic loops through the landscape—“meanders,” the locals call them, turning a verb into a noun by way of apt description—one of which almost entirely circles the old town of Cahors itself. Over millennia, the forceful flow carved out its valley, but also twisted—straightening here, veering a new way there—leaving behind pebbles and alluvial soils on its banks and defining the terroir that contemporary winemakers have mapped and are employing keenly to create Malbecs of nuance.

In broad strokes, a series of terraces steps from the banks of the river, with soils made up of varying alluvial deposits. Above the terraces, a steeper slope ends in an undulating plateau (the two together called the “causse”), an uplifted former seabed with limestone-rich soils today. Wines from the terraces tend to be more concentrated and dense, with powerful fruit; from the causse, more savory and minerally, with higher acidity and firmer tannins.

Up on the plateau, at Château Ponzac, with sweeping views from an entirely modern stone tasting bungalow fronting his ancestors’ historic château, Matthieu Molinié is improving on tradition. “My family has been [in Cahors] since the 16th cen- tury,” he says. “My mother was born on the plateau, my father in the valley.” And a mélange of aged tools in the château’s ancient cellar is record enough that they made plenty of wine over the years: hulking old foudres, oak and concrete tanks, amphora . . . The family sold its operation to a co-op in 1970, but in 2000, Molinié staked new claim to making wines his way here.

“My job is not to make the wine you want,” he argues, “not to follow fashion or chase commercial success. It’s to make a just wine, a wine of balance that’s an authentic expression of the soils here.” And with infectious excitement about that dirt, he leads me to his tiny Citroën, and we bounce through the vineyards for visual confirmation of the palette Molinié is playing with—white stones in one block, red stones (more iron in the limestone) in another. Explaining how he makes use of the differences, he describes small-lot production that is the hallmark of great winemaking the world over: “I make wines from small places.”

The only thing Château Lagrézette—to the northeast, on the opposite side of the river—has in common with Château Ponzac, other than a castle, might be centuries of winemaking history. In Lagrézette’s case, though, both domicile and drink have been transformed on a grand scale by Alain Dominique Perrin, former director of Cartier International, who in the 1980s restored the 15th-century castle and, with wine partner Michel Rolland, an internationally acclaimed consultant, designed a spare-no-expense gravity-flow winery. The goal, according to winemaker and technical director Cédric Blanc, is the soft handling of separate lots from the vine all the way into the barrel under the arches in the handsome cave. Gentle treatment, along with later picking decisions (“We want our fruit a little riper, always looking for that ‘sunny vintage’ you hear about,” Blanc says) gives Château Lagrézette Malbecs more of an international spin, a seductiveness shared among the world’s top reds.

For a break from serious sipping, lunch at the gastronomic farm Domaine de Saint-Géry fills in the larger context of the rich resources of Cahors—and its potential for adventurous gourmands. The eponymous castle burned down during the French Revolution, but the ancient stone farm compound has been carefully restored by chef Patrick Duler and his wife, Pascale, first and foremost into a gracious inn and restaurant where they have played host to guests as disparate as Richard Gere, Tina Turner and Princess Caroline of Hanover. A pre-lunch tour of the complex takes in the couple’s famous hams, hanging heavily as they age for 30, 40, 50, even 60 months; a knoll-top planting of truffle oaks (because truffles love the same terroir as wine); and a vaulted wine cave taking shape for producing wines from their vineyards on the property, with plans for the fermenting vintages to share space—and yeast—with the hams. “We wanted to re-create all the different activities of the old way of life here,” says Pascale.

Today, Saint-Géry ham—a marvel of only three ingredients: the best meat, good salt and yeast—is served by many top chefs in France. A whole ham starts at about $1,400. To do it justice, Patrick advises, you must chew each bite 27 times, to draw out the salt and aromatics. And to do lunch justice here, block off more than a few hours, and come hungry for truffles and foie gras.

While the lovely rooms of Saint-Géry are no doubt far more comfortable than they were when the place was a humble farmhouse, here in Cahors it’s possible to upgrade to a castle itself: Château de Mercuès. Dating from the 13th century, these walls saw some bloody times through religious and political spats, until the 17th century, when the hilltop estate was commandeered as a summer retreat for the bishop of Cahors. These days, Relais & Châteaux membership guarantees modern luxury layered over period furnishings, with only minimal ducking required to pass through some of the ancient halls.

Here, too, you’re not far from Michelin-endorsed cuisine: One-star chef Julien Poisot presides in the hotel’s restaurant (snag the chef ’s table in the nook just outside the kitchen to watch the master and his team whip up each of your courses). Also at the ready is your next sip of bar-setting Malbec. Château owner Bertrand Vigouroux is a vigneron as well, with multiple wines under his Georges Vigouroux label available to try under the vaulted ceilings of the tasting room.

One trio of wines in particular here bridges old Cahors winemaking with new, and moreover, Old World winemaking with New—a joint project with Northern California’s Paul Hobbs, called Crocus. All three wines show the modern attention to riper fruit and refined tannins that mark Cahors Malbec now. What is exceptional is that from the entry-level Malbec de Cahors “L’Atelier” (a remarkable deal at $20) through the mid-level “Le Calcifèr” ($45) to the top “La Roche Mère” ($125), the partners have played with new oak, from none in the first to a full 24 months for the third, with all of the warm oak spice and elegant texture you’d expect from that treatment, plus the minerality and energetic freshness that just can’t be tamped down in Cahors.

The castle’s deep-set windows offer idyllic views for miles across the valley to the river that has carried the minerals and pebbles that now define Cahors’s terroir. A few days spent re-creating that journey, following the meanders of the Lot from vineyard to vineyard—with plenty of gourmet breaks in between—is the ideal way to taste that terroir for yourself.

Try before you fly

When it comes to exploring Cahors Malbec, nothing beats boots on the ground. But here are some top bottles available stateside.

Bright and lovely, with the textures of melted tannins layered under tart blackberry, earthy forest notes and well-integrated oak ($100).