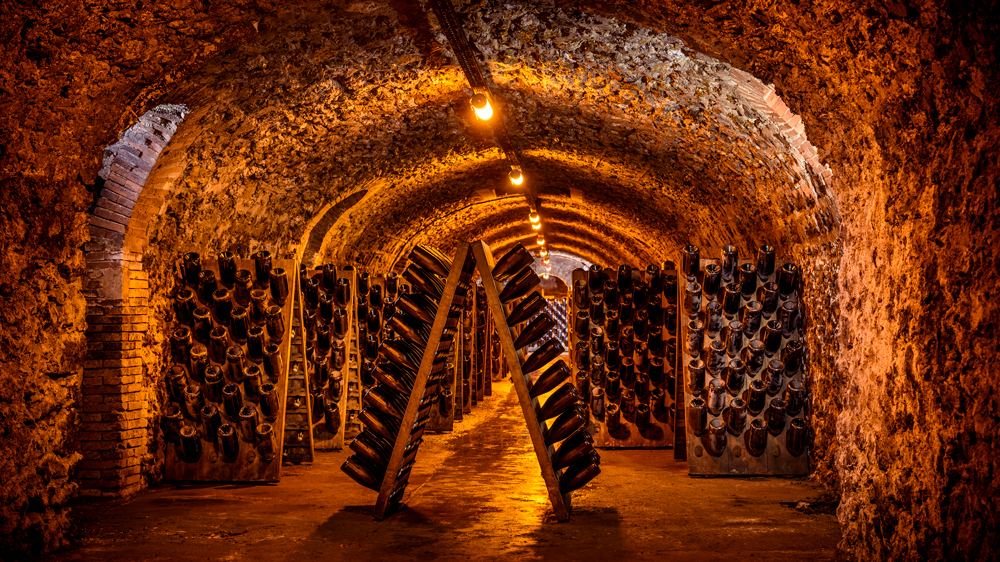 In World War II, Champagne faced an existential threat. Hitler, enamored of the region’s wine, requisitioned production for the Nazi élite. The family-owned vineyards there put aside their rivalries and banded together to fight back in subtle ways, and to ensure their survival; they went so far as to rebelliously dub the vintage of 1939, a notoriously poor year, as produced specially for the Führer. Now, 75 years after the end of the war, the region is facing existential threats again. In this case, the challenges come not from a treacherous dictator but from multiple forces: economic, political, environmental and technological.

First, money. Most know that the pandemic turbocharged alcohol sales as a whole in the developed world—online sales surged 243 percent in the US alone. The good news didn’t extend to Champagne, though; per the Comité Champagne (CIVC), the growers’ trade body, bubbly bucked the trend. Sales cratered as lockdowns started, an impact worse than the Great Recession more than a decade ago. Initial figures suggested Champagne would end the year with a 75 percent decline year on year, before it rallied somewhat. The final tally was an 18 percent overall decline at the end of 2020 for an expected $1.2 billion loss.

It’s easy to see why, of course: a drink synonymous with celebration for centuries was out of sync with the mood of much of 2020. Postponement of weddings from the summer, and restrictions on parties in many states, only compounded the challenge. The the closure of bars didn’t help, either. Much of the Champagne market here is on premise, and sold by the glass, per Bill Terlato, who now runs one of America’s foremost importers. Beyond that, Champagne has something of an image problem: The American Champagne drinker is older, or at least assumed to  be. Stateside, it’s a fustier option than easy-to-drink, cheaper Prosecco, which now sells almost five times as many cases to Americans. Even when younger drinkers do order Champagne, they’re more “promiscuous in their selection, and much less brand loyal, Terlato warns.

The UK, Brexit and Climate Change

Champagne faces political pressures, too—specifically, Brexit. No longer bound by EU rules around geographical indication (GI) status—think Parma ham must be from Italy’s Emilia-Romagna—the Brits could tout the fizz produced by their booming wine industry as “Champagne.” When producers like Nyetimber are beating Billecart-Salmon and co in blind tastings, it’s a pressing problem—made only more intense by climate change, the other major challenge taking the fizz out of the market.

The chalky soil of England’s southern reaches is geographically similar to much of Champagne; better weather alone sets the French region apart. When days grow warmer, it leaves Epernay and its environs exposed, nudging the ideal conditions north to Sussex. Higher heat, of course, diminishes acidity, as the notorious record summer of 2003 proved, when production in Champagne plunged by one half. The evidence of climate change is already troubling, notes Caroline Brun, a consultant in the Champagne business who grew up in the area. “When I was a little girl, the harvest was always done in October. Now 30 years later, it’s the very beginning of September, or even end of August,” she notes.

The Path Forward: A Focus on Elite Vintages

How, then, does Champagne fight back? Benchmark Wine Group CEO David Parker has a few ideas. He says that the surge of Prosecco seems unstoppable, so better to cede ground at the cheaper end and focus on rarefied vintages. His firm’s own data shows a rising interest in ultra-premium fizz. Volume sales in 2020 for champagne were down 1 percent, he tells Robb Report, but the dollar value was up 13 percent, with the average price of a bottle increasing from $170 to $199. “Champagne has become the new burgundy, it’s very collectible,” he explains, adding that the value of a particular basket of champagnes that the firm tracks, S&P Index-style, has risen 12 percent in the year ending April 2021. “Burgundies got too expensive, with the highest grand cru around $15,000, so people started looking for another wine that had the same characteristics: beautiful aging, great food-friendliness, relatively consumable on an ongoing basis, small production among the top vineyards.” Look beyond the classic Krug Clos de Mesnil or Dom Pérignon, too, per Parker. “A few years ago, people would say they’d never heard of Selosse, but now it’s the ultimate example of trading up.”

As for appealing to new markets, Champagne production has long been labor-intensive and chemical-shunning—innately appealing to the more conscious consumer of Gen Z and beyond. So marques are now looking to market organic wines from certain patches of land: Le Green Label from Champagne Lanson, for example, is made from juice harvested on a single, 40-acre patch which is certified organic and biodynamic. Producers are also increasingly embracing the certification HVC or Haute Valeur Environnementale, as consultant Caroline Brun explains. “It means ‘sustainable agriculture’ and the CVC is really pushing to educate smaller growers of land to have a very clean philosophy like that. There’s such a high social pressure on eating and drinking as healthily as possible.” She namechecks Champagne Fleury, whose winemaker pioneered this approach, working biodynamically for decades.

Climate change, of course, remains by far the biggest challenge, one the industry is tackling in different ways. Benchmark’s David Parker lauds how it’s loosening some of the stringent regulations that constrained innovation: North-facing land which might have been disallowed as growing terrain before is now more viable and so could be co-opted by neighboring vineyards. As for varietals, watch pinot meunier, Parker adds. Long used sparingly for its aromatic, fruity punch, it could also rise in prominence. It’s likely to be more versatile than a pinot noir grown in warm temperatures, which will reach sugar levels that could overwhelm a classic blanc de noirs.

Seven grapes have long been permitted to be used in wines permitted to be called champagnes; of these, the big three—pinot noir, chardonnay and pinot meunier—represent more than 99 percent of current plantings. Look for that number to expand, if the CIVC’s program with the French National Institute for Agricultural Research bears viable fruit, too. It has teamed up to plant more than 4,000 seeds, all hybrids, around the region, to test which grow best in the new conditions; it will then winnow down the candidates to a handful of new, climate change-resistant grapes that could be introduced to the approved roster.

Thibaut le Mailloux, the CIVC’s communications director, says this could take up to 25 years, though. “We have to plant those seeds, then select the best, assess them on the field, then test the grape to see how the wine evolves,” he says, “But the goal of this research is to keep the specificity and difference of Champagne against all other sparkling wines. We have to adapt our practices because the terroir is changing, to ultimately keep real Champagne unique, and different.”

A Reason for Optimism

What of the problem that Champagne’s buoyant reputation was out of sync with the general mood of 2020? That’s likely to resolve itself a little more naturally, of course, as rolled-over and postponed celebrations like weddings and birthdays turbocharge this year’s sales. David Parker notes, too, that everyone should have a very 2021 excuse to pop open a bottle. “I spent quite a bit of money on the bottle of Champagne I drank after my second vaccination,” he laughs. We’ll drink to that.