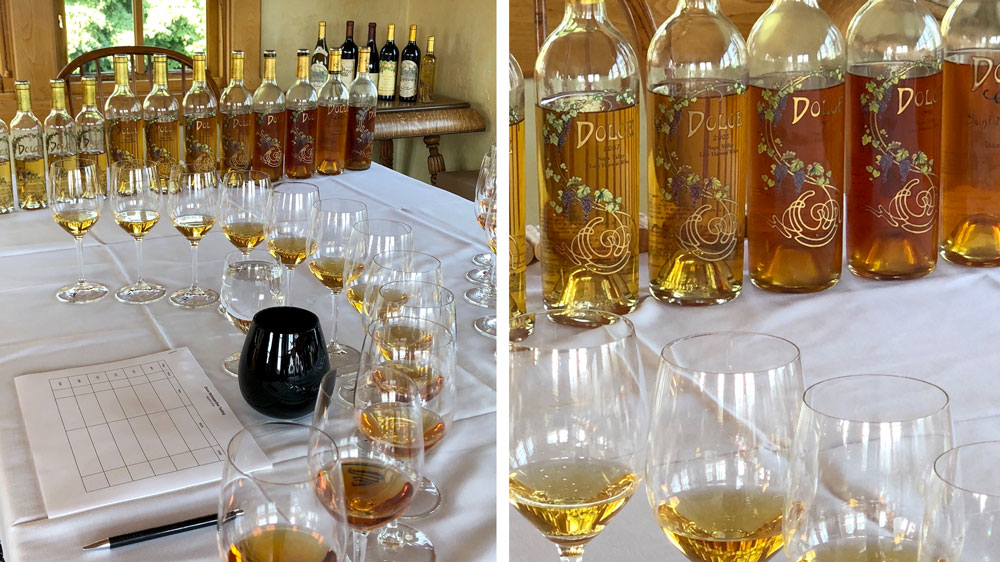 A dozen glasses span form a wide arc around my notebook. The wine in them runs a glorious spectrum from light golden at one end to deep amber at the other, mirroring the colors in the line of richly etched bottles at the end of the table. Winemaker Greg Allen, behind his own identical curved spectrum of glasses opposite me, grins and asks, “Do you want to start young and work backward through time? Or start old and work forward?” Either way, it’s a rare tasting we’re in for: a collection of vintages of a single wine that has become a legend in Napa Valley. Hoping to get the clearest view possible of the nuances of the older vintages and how this wine withstands—or thrives—with time, I opt for the earliest first, and we put our noses to work with the 1991. Signature apricot aromas and candied orange peel give way to caramel, spice, vanilla bean, and brioche on the palate. The finish is remarkably fresh and bright, belying the wine’s amber color.

This is Dolce, California’s bar-setting late-harvest white from Far Niente, modeled after the much-sought-after and long-lived Sauternes of Bordeaux—perhaps the queen of which in collectors’ hearts is Château d’Yquem. Allen has chosen this cross section in time for us to taste, with the not-yet-released 2014—the lightest golden wine anchoring the left end of our arcs—marking the 25th consecutive commercial vintage of this remarkable brand.

It’s a hard-won beverage. Allen, Dolce’s president as well as winemaker, describes the counterintuitive struggle in the vineyard to let the fruit—Sémillon and Sauvignon Blanc—hang long enough to develop high sugar levels, dehydrate for concentration, and with luck (which they’ve had every year to date) develop the mold that is key to the sweet wine’s complexity: botrytis, that elusive “noble rot” that’s certainly only noble in a late-harvest setting. “You have to have the courage to let a beautiful crop succumb to the forces of nature,” he says. And you have to watch what the dry-wine vintners are doing in the vineyard and do the opposite—let the canopy drop around the fruit to keep in moisture, for instance (encouraging that mold), instead of pruning and trellising so the fruit zone gets sun and free-flowing air.

Many of those forces of nature are far less beneficent than the desirable mold. For instance, Allen points out, in those nail-biting weeks after Napa’s conventional harvest and before Dolce’s in late October, November, and even early December, their vineyard is the only source of sugar in the valley. Enter the yellow jackets. One rift in the skin of a berry, and the pulp can turn to vinegar—anathema to the final wine. The Dolce harvest, then, is an exercise in painstaking berry selection—or, rather, berry de-selection—with pickers tasked with sorting through clusters in the vineyard and culling every berry that isn’t infected with botrytis or showing yellow-jacket damage. While pickers in Far Niente’s Chardonnay vineyards average 400 pounds per person per hour, pickers in the Dolce vineyard manage only 10 to 20. (In case you’re wondering, they’re paid by the hour.)

This seemingly grand risk (and sketchy business model) was the vision of a predecessor of Allen’s: Dirk Hampson, longtime winemaker at Far Niente. In 1984, Hampson had the temerity to suggest to now-late Far Niente owner and Napa icon Gil Nickel that they try a late-harvest wine. Perhaps surprisingly, Nickel—who by report was known to say, “When I want your opinion, I’ll give it to you”—supported the venture, and through early, rocky experimentation (the entire 1987 vintage was eaten by those yellow jackets), a cult favorite was born.

Allen’s own first encounter with Dolce was less than auspicious. As a cellar intern in 1996, he pulled the bung from a barrel, not knowing that some eager yeast had come out of retirement (still so much sugar to eat!) and had started fermenting again. Allen says a cone of Dolce shot into his face, and he thought it was all over for him.

Now, the small, sweet chambers carved for Dolce out of Far Niente’s massive cave below are his domain. And in the tiny cupola atop the historic stone winery where we’re tasting—which has one of Napa’s great vineyard views spreading to the east—he’s looking back with relish, scribbling copious notes, musing about the vagaries of each year, and delighting in what we’re finding in this dozen. Moving to the 1998 (still amber!), honeyed stone fruit stands out along with baking spices and butterscotch. The 2000 has a savory quality, the 2005 a mouth-watering citrus edge. All express some form of the classic Dolce character of apricot, orange (leaning toward marmalade at times), and brioche notes. And they’re absolutely alive.

Standouts in my book? Dolce 2005. Here’s where a subtly brighter freshness slips in, with pretty floral aromas, cinnamon, and vanilla spice. The stone fruit leans toward nectarine, and while there’s a rich nectar mouthfeel, it’s not heavy. The 2008 carries bushels of fruit—orange for freshness joined by a gamut of stone fruit. Baking spices decorate the edges, along with that brioche again, plus vanilla bean, hay, and potpourri. And, finally, the 2012 (current release; $85 per 375 ml) is simply a lovely wine. Technical terms run out of juice for this one. But an ebullient floral quality and a touch of herbs over pear and fresh stone-fruit flavors, as well as silky textures, create a perfectly balanced wine that’s a little lighter on its feet than some of its cohorts.

A sweet spot appears at about the 10-year mark. Allen, in fact, advises any collectors lucky enough to have a cache of Dolce in their cellars to start drinking the vintages in the decade range. Still, he contends, he can say with confidence that Dolce can go a good 20 years. (Consider the freshness of that 1991 Exhibit A.) Great Sauternes live considerably longer, and he suspects Dolce can, too. Only it’s just now telling the story.