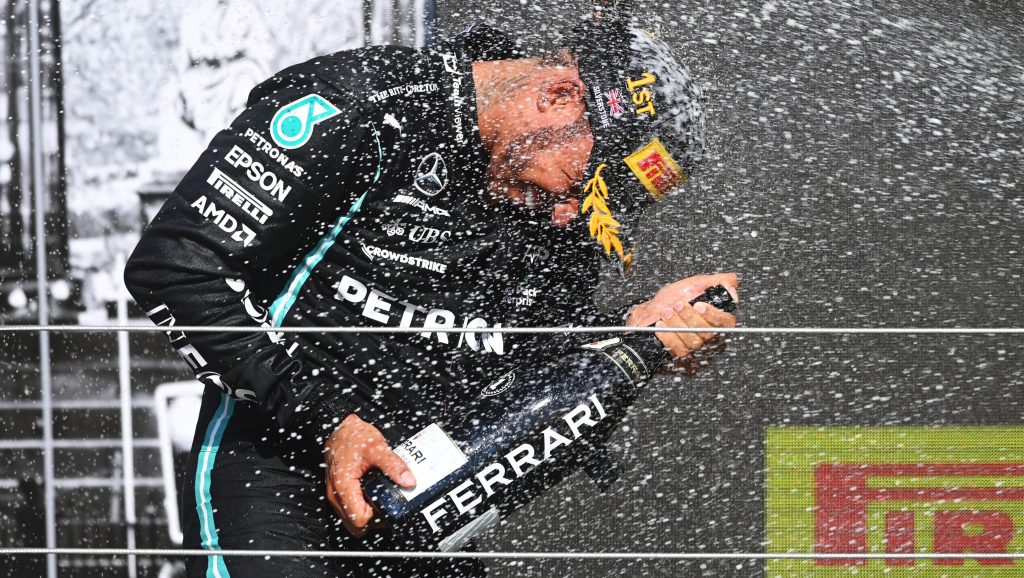 Formula 1 fans may be used to seeing the name Ferrari up on the winners’ podium—though last weekend the Ferrari race team placed third in the world championship at the Abu Dhabi Grand Prix, with team Red Bull capturing the win in an upset over Mercedes. But there’s another Ferrari making a splash on the F1 scene these days: the sparkling wine the drivers were popping on the stage.

Ferrari Trento bubbly is widely known in Italy and throughout Europe, but in the US, not so much. Most of us consider Prosecco synonymous with Italian sparkling wine, but Ferrari Trento creates sparklers using the same grapes and methods used in making Champagne. It’s decidedly not Prosecco. And for the F1 win, the house made a special edition: the F1 Podium Jeroboam, a three-liter monster equivalent to four standard bottles of bubbly. It’s made with 100 percent Chardonnay from the 2015 vintage, so in the parlay of Champagne, it’s a blanc de blancs, and it was aged on its lees for more than four and a half years.

The company, which was founded in 1902 by Giulio Ferrari, now produces about four million bottles of wine each year, on par with Dom Pérignon, which averages about five million annually. Its portfolio runs the gamut from $25 bottles to its riservas, which can go into the hundreds per bottle, with the Giulio Ferrari Riserva del Fondatore being the top of the line and made only in quality years. Critics regularly score it in the high 90s, and it has won many awards since its first vintage in 1972. That wine spends 10 years on the lees gathering complexity. Like most of the best vinos around the world, the grapes are harvested by hand, and the yeasts used in its aging are native to the property, rather than using commercial ones.

The first grapes planted by the founder were Chardonnay, and they seem to love the slopes of mountains in Italy’s Trentino region and their perch at about 1,000 to 2,000 feet above sea level, inland from Venice and north of Verona.

Aside from its time in the spotlight up on the F1 podium—a three-year partnership launched in early 2021 by CEO Matteo Lunelli—the wine has been on a winning streak of late, cleaning up at the Champagne and Sparkling Wine World Championship competition in November with 12 gold medals and beating out Louis Roederer as Sparkling Wine Producer of the Year. At the same competition, the Ferrari Perlé Nero Riserva 2012 in magnum was named the Blanc de Noirs World Champion.

At least when the F1 drivers enjoyed the win with a foaming bottle of Ferrari Trento last weekend, the jeroboam was big enough to afford both a celebratory spray and some healthy sips of the good stuff.