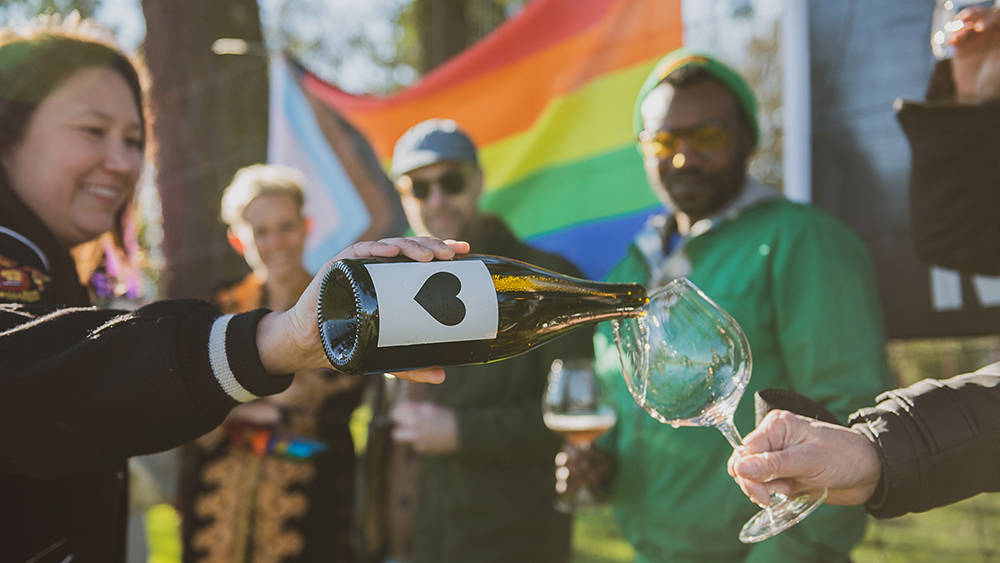 There are a lot of great ways to celebrate Pride month: parades, concerts, charity events—the list goes on. One that isn’t so frequently mentioned, though? Wine.

The world’s first queer wine festival will be taking place later this month in Oregon’s Willamette Valley, Eater reported. The Queer Wine Fest is bringing together 16 queer-owned, queer-made or queer-grown wineries in Oregon, Washington and California to celebrate the LGBTQ wine community. Some of the wineries involved include Elk Cove Vineyards, Hip Chicks Do Wine and Sis and Mae Wine, with all participants pouring two different options. Along with the drinks, there will be food pairings from culinary regions around the world and live music from the Portland-based pop band Camp Crush.

Cheers will definitely be in order at the Queer Wine Fest.  Zachary Alan Photography

The festivities are being hosted by Remy Wines, a Willamette Valley winery founded in 2006 by Remy Drabkin, a lesbian winemaker and the co-founder of the nonprofit Wine Country Pride. In addition to these roles, in April she was appointed the interim mayor of McMinnville, Oregon, becoming the first woman and queer-identifying person to hold the position.

Wine Country Pride, which began in 2020, is dedicated to bringing Pride celebrations to rural Oregon, and the organization is hosting a slew of events alongside the Queer Wine Fest this month. The lineup includes everything from brunches and dinners to street fairs and parades.

Since its founding, Wine Country Pride has raised more than $30,000 for organizations that support the queer community and for scholarships for LGBTQ youth. Its Queer Wine Fest will take place on June 24, with tickets priced at $125 to $145 and proceeds benefitting the nonprofit. If you’ve been looking to expand your palate and diversify the causes you support, this seems like a pretty good way to do both.