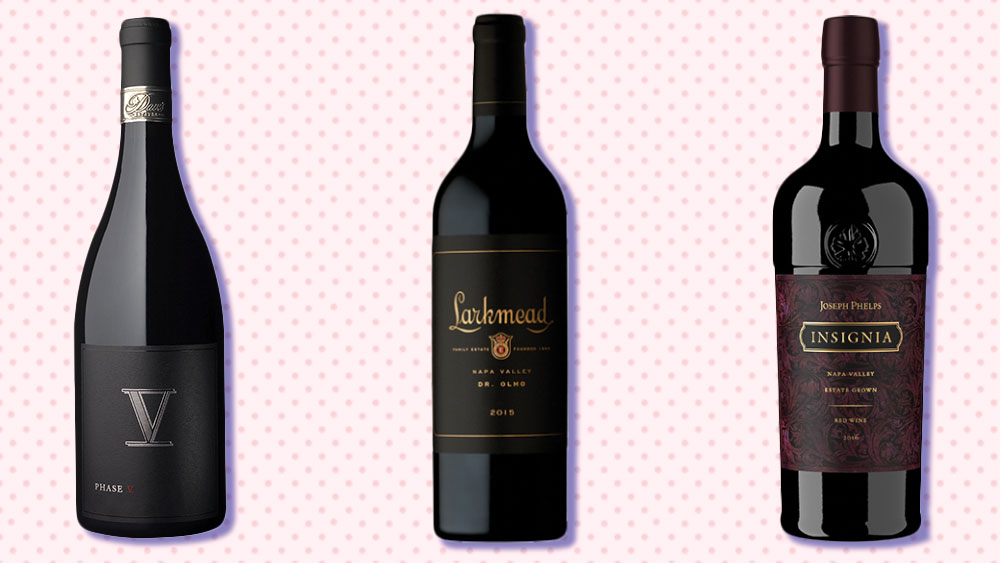 Since last year’s bottles of these wines were so good, we’ll be struggling to put these in the cellar to age. Luckily, these reds are ready to sip now, future be damned. From an inky dark Petite Sirah to a bittersweet Cabernet Sauvignon, here are five reds we just can’t wait to pour.

This wine is rich, meaty and inky dark with a tight structure. It has lots of years to go on it but is still good now with lamb, venison, pork or a good porterhouse. You’ll find charred lamb and roasted nuts on the nose, with stewed fruits, panettone, dusty mint and black cherry in the mouth. Phase V is Davis Estates’ most premium expression, made with the very best grapes from the very best parcels. Celebrated winemaker Philippe Melka has had his hands in the making of this very limited-production wine (just 141 cases). Buy three bottles; it has a candied, can’t-stop-drinking-it quality that will have you uncorking a second bottle with dinner faster than you’d expect, and you’re going to want to tuck one away.

With the 2015 vintage in Tuscany being so lauded, no one expected 2016 would compete. But, it’s just as good, if not better, especially for wines made in the coastal Bolgheri area, like this one from legendary producer Ornellaia. The full-bodied Italian red is surprisingly light on its feet. Its nose is an intoxicating mix of herbs, mushrooms, loamy earth and cut ferns by the sea. Black mission figs, dark cherries and cassis follow on the palate. This is a blend of 51 percent Cabernet Sauvignon with 27 percent Merlot, 18 percent Cab Franc and a splash of velvety Petit Verdot. It was barrel-fermented and aged lot by lot. Once all the separate lots were married, the wine went back into casks for an eight-month honeymoon, yielding one of Tuscany’s great reds, which incidentally garnered 98 points, Ornellaia’s highest score ever.

Insignia is one of those wines that has something of a cult following, and for good reason. It’s 100 percent estate-grown and contains the best of the winery’s top parcels from its extensive holdings around Napa Valley. Always a blend of Bordeaux varietals, Insignia is consistently well-balanced, even in a year that finally broke California’s long drought seasons with plentiful rain. This latest vintage is both elegant and bold, with roasted coffee flavors, luscious ripe plums, blackberries and a signature velvety texture.

Larkmead’s land has been planted to vines since the 1870s on Napa’s valley floor in Calistoga, so even if the winemaker didn’t know what he was doing, the vines would. This particular wine, the Dr. Olmo, is planted in gravelly soil just perfect for Cabernet Sauvignon. Tea, black licorice and Luxardo cherries are on the nose with some dried herbs. On the palate, find bittersweet chocolate and blue and black fruit. The long finish lets you know this bottle of 100 percent Cab can go the long run in the cellar, but it’s still a bottle to open now; you’ll just want to decant it an hour ahead. Winemaker Dan Petroski got his start working in the magazine business before heading to Sicily for a real education.

Cakebread’s most premium offering is a crowd-pleaser but also so much more—dark and wild, much like its mascot. Black cherry, fig and blackberries dominate the fruity notes of the wine, with a hint of forest floor and a surprising minerality. Its vines are planted on the slopes of Howell Mountain and subject to regular stress, yielding small berries packed with flavor. This vintage is nearly 85 percent Cabernet Sauvignon with the remaining 15 percent a mix of Cab Franc and Merlot. Winemaker Stephanie Jacobs does a remarkable job of taming the wine’s tannins, especially on such bold mountain fruit.