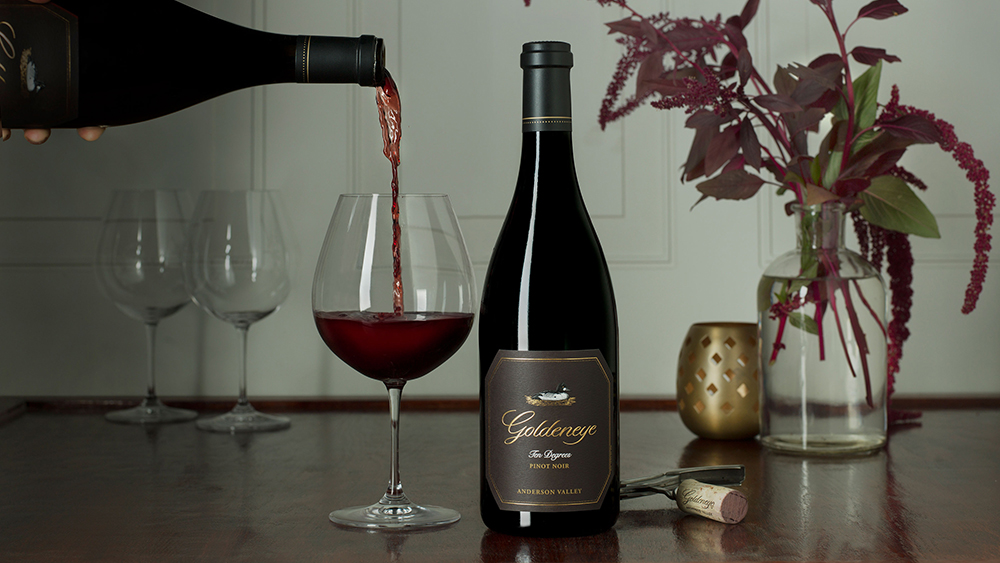 Pinot Noir—famously thin-skinned and finicky—is well known for its ability to express a remarkable range of character based on where it’s grown. The wine might be the best lens ever for catching an honest glimpse (make that taste) of a region, and lucky us if a producer sheds light through multiple micro-productions of the transparent red. Winemakers love, of course, to produce Pinots from separate regions—Russian River Valley, Monterey’s Santa Lucia Highlands and Santa Barbara’s Sta. Rita Hills, say—or even from sub-AVAs within a broader single swath (Green Valley of Russian River Valley, West Sonoma Coast and the Petaluma Gap). But rare is the winery that offers up a fine-tuned collection of Pinots from vineyards a stone’s throw from one another, in essence a deep dive into the nuances of one place.

In Anderson Valley, a 15-mile-long corridor running along State 128 as it snakes toward the Mendocino Coast, that producer is Goldeneye. Intended from its beginning almost 25 years ago to be Dan and Margaret Duckhorn’s Pinot Noir house, Goldeneye (which shares the duck theme with other company ventures as well: Decoy, Migration, Paraduxx, Canvasback …) has, in fact, been the most significant player in the evolution of the small, cool Mendocino valley from a stealth region into one understood and sought after by wine lovers and acclaimed Pinot producers alike. Back in the 1970s, Anderson Valley Pinot Noirs from the likes of Littorai and Williams Selyem were something of a cult phenomenon. Now, more than a few top producers from outside the region make an AV Pinot Noir. They tend to be one-offs, though, so the view is limited.

That makes the wines from Goldeneye’s three estate vineyards all the more welcome (and a side-by-side taste of them a slightly nerdy and wonderful romp through the region). As winemaker Katey Larwood says, “Wine is the only commodity where you can taste the earth.” And Anderson Valley’s vast differences, from east to west, are why she’s “madly in love” with the place—and with physically walking the vineyards to understand the “super-micro sub-plots” they’ve carved the rows into, because, as she says, “Pinot Noir is shaped by its location rather than what the winemaker does to it.” In other words, it’s worth taking pains to capture the character of each part of each vineyard, for the reward of their differences.

The Goldeneye 2017 Gowan Vineyard Pinot Noir ($86) comes from one of the lowest parts of the valley, where cool air pools. Racy acidity is front and center, as is pennyroyal, a locally prolific weed that imparts an herbal character (spearmint and anise) to wine—a good thing! Savory notes follow, with black licorice and forest layered under black raspberry and cherry. The 2017 Confluence Vineyard Pinot ($86), from the hills behind the Goldeneye tasting room itself, combines spicy, vivid red fruit (raspberry, strawberry) with more savory notes of loam, leather and green tea. It’s silky, but with a rustic, ironlike finish. The 2017 Narrows Vineyard Pinot ($86) comes from farther west, the “deep end” of the valley where it disappears into the redwoods. “We planted wherever there was sunlight,” says Larwood of the cool spot, which enjoys a strong marine influence. The wine, like the land (bear sightings aren’t uncommon), is just a little wild, with an earthy, brooding character and pronounced tannin structure. Mushroom and forest floor add savory complexities to dark cherry flavors. “Our most cerebral wine,” Larwood calls it.

The best of the valley comes together in Goldeneye’s 2017 Ten Degrees ($130) blend of the three estate vineyards. Lush and bold, it’s a Pinot with an intense and structured core surrounded by complex layers of exotically spiced red fruit intermingled with savory forest and mint.

Larwood’s relationship with Goldeneye’s three estate vineyards is anything but simple. A Confluence Vineyard Pinot isn’t just a bottling of one sweeping pick and fermentation. It’s the final blend of a mind-boggling number of combinations of clones and rootstocks, mapped out in blocks, fermented separately in small lots, then barreled down in a spreadsheet-defying range of cooperage and toast levels, fine-tuned to each patch of vineyard. You might call what ends up in the bottle the Best in Show. And this particular collection places Anderson Valley somewhere on the character scale between Oregon’s lean and savory Willamette Valley Pinots and the Russian River Valley’s full-bore richly fruited ones—a good place to be as we wine lovers are finding a taste for a little earth with our berries and plenty of acidity ruffling our silky textures.