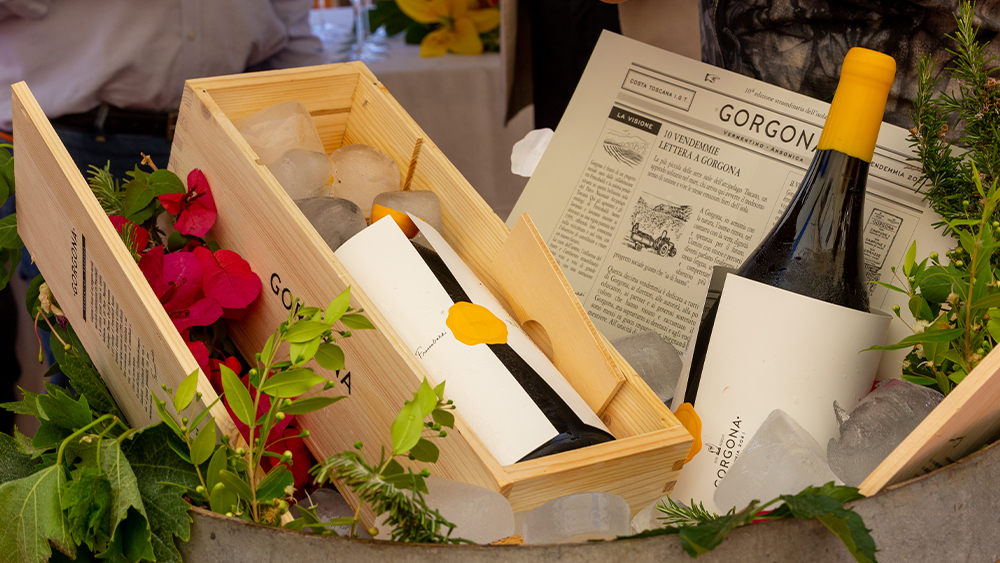 Alcatraz it’s not. The tiny island of Gorgona—a 24-mile boat ride out into the Mediterranean from Livorno on the Tuscan coast—might share water-bound penitentiary status with the infamous fortified island prison in San Francisco Bay, but squint just right, and the colorful stucco bungalows hugging the steep hillsides leading up from the dock morph into a miniature of a Cinque Terre fishing village. Climb the steep slopes behind the small hamlet and you’re skirting carefully tended grapevines stepping up to the top of the island in an amphitheater of vineyard terraces overlooking the broad sweep of ocean separating this island—part of the Arcipelago Toscano National Park—and the mainland. There is no swimming across this formidable moat. Then again, there’s less incentive to escape this incarceration than most because it is Gorgona’s inmates—65-plus at any given time—who tend the vines, harvest the fruit and make it (on the island) into a delicious Gorgona white wine (for the record, made of Vermentino and Ansonica varieties).

This year marks the 10th anniversary of the seemingly quixotic prison project, founded and championed by Marchese Lamberto Frescobaldi, president of Marchesi Frescobaldi, legendary Italian family producer with more than 30 generations of winemaking—spanning some 700 years—in the history books. Lamberto Frescobaldi might oversee high-profile properties like Tenuta Castiglioni and Tenuta Perano, but in August 2012, an email from Carlo Mazzerbo, the then-director of the correctional institution, touched a nerve: “We are the prison of Gorgona,” it said. “We have just over a hectare of vines, and we need someone to help us make the wine.” Frescobaldi knew the grim recidivism rate in the Italian prison system—85 percent. And he saw the chance to do far more than make some rare wine on a remote island in the Mediterranean; he envisioned gainful employment for inmates, training that would take them beyond the mechanics of vineyard management and winemaking to the work ethic it takes to rise above criminal patterns and assimilate on the outside.

The vineyards at Gorgona.  Marchesi Frescobaldi

“It takes just a few seconds, when your brain shuts off,” says Frescobaldi, “and you do a stupid thing. Then finito, goodbye—see you in 25 years.” The Marchese is also well aware that when most inmates emerge on the other side, their old cohorts in crime are waiting to enlist them again. “When they step out,” he says, “it’s important to leave with a bank account—10,000, 30,000, 40,000 euros—so they can say no to the old crime life.” And to that end, he pays the inmates on the island, who, in the last three to five years of their sentences, are growing and making the wine under the aegis of Frescobaldi viticulturists and enologists, the same rate they would be making on the mainland. And he offers them a year of employment at one of his wine estates when they leave. “Then they have to fly,” he says.

The first two legs of the experiment have been 100 percent successful, according to Frescobaldi. When the former inmates leave the family’s employment, though, for privacy reasons he can’t track them. But they can report back to him, and the anecdotes are promising. “This is the first payroll of my life!” exclaimed one employee, who said the first thing he did on the outside was buy a pair of shoes. Simple, life-changing.

To that original tiny hillside plot, another 2.5-acre vineyard was added in 2015, and an additional half acre in 2017. Small numbers, those, with a production stretching only to about 9,000 bottles a year. But the wine is more than worth tracking down—2020 being the current release. And a sneak preview (on the island) of the 2021 Gorgona, which will make its way to the States soon, reveals citrus carried by an ocean breeze. Lovely white peach, green melon, and lime zest join on a long, crisp palate edged with a refreshing vein of salinity and oyster-shell minerality, with hints of tropical fruit and fresh herbs emerging on the finish.

After his first visit to Gorgona, that August in 2012, and his precipitous, hand-shake deal to mobilize his winemaking apparatus to harvest the vineyard and launch the inmates into winemaking, it occurred to Frescobaldi to ask the director, “Why did you pick me?” As it turns out, he didn’t. “I made 200 calls!” said Mazzerbo. “You were the only one who answered.” The right answer, it seems, has meaningful consequences.