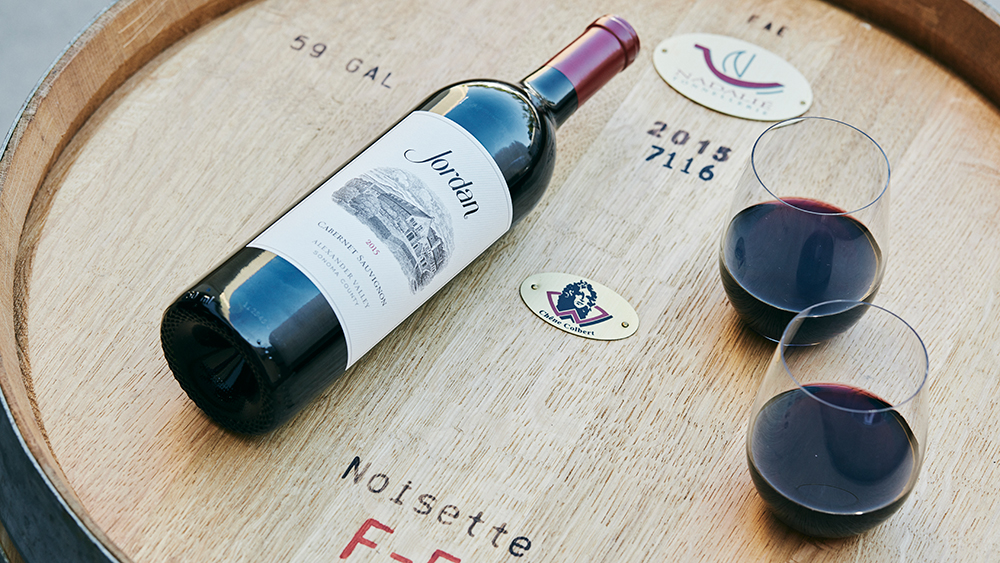 On the face of it, this might sound like a monumental statement of the obvious: The 2015 Jordan Vineyard & Winery Cabernet was aged in all French oak. Well, of course it was, right? What great California Cabernet is housed in American oak these days? But not so fast. This is also true: Jordan’s 2015 is its first Cabernet to be aged in 100 percent French barrels. And this cornerstone Alexander Valley winery’s complete evolution to tonnellerie Francaise is a tale involving the history of Cabernet itself in the state, and of icons—both the wine and the winemaker varieties.

You have to remember, explains winemaker Rob Davis (who has north of 40 vintages at Jordan under his belt), that in the early 1970s, when Tom and Sally Jordan bought their vineyard in Sonoma, there were only some 320 wineries in the state. A full 80 percent of wines made and sold were white. The Jordans, though, were inspired by the First Growths of Bordeaux, and Tom Jordan believed, as Davis puts it, “husbandry as an owner could be better achieved in growing superior fruit than entrusting a grower to provide delicious fruit.”

It didn’t all go as planned, though. Jordan’s assumption, according to Davis, “would have been correct, except the terroir of the first growths differed greatly from the estate vineyard that he chose back in 1972. Tom missed the importance of soils.” Davis is quick to add that in those days, the wine program at U.C. Davis (of which he was a recent grad) wasn’t offering information about flavors derived from soils. And lacking sophisticated analyses and advice on that front, the Jordans chose vineyard land on the valley floor.

Enter a winemaking legend—Russian-born André Tchelistcheff, longtime winemaker at Beaulieu Vineyard, creator of Georges de Latour Private Reserve, and mentor to an entire generation of California producers. The Jordans were great fans of the Private Reserve and brought the already not-young Tchelistcheff on as consulting winemaker. Davis recalls his excitement. He thought he’d be able to work with the legend for a couple of years, but the stint stretched out to 18.

Tchelistcheff was not impressed with Jordan’s vineyard. “Of the millions of things I learned from André Tchelistcheff,” says Davis, “the one theme he hit hard over and over was the importance of terroir. And frankly, the soils of our estate did not have much in common with those of châteaux like Pétrus, Cheval Blanc, Haut Brion, Margaux, Mouton, Lafite, Latour….” Yet together, Davis and Tchelistcheff managed to fashion Cabernet Sauvignons through those formative early decades that set bars and established early California style for the variety.

And part of that style involved employing a large proportion of American oak. There was certainly precedent. Tchelistcheff had used American for his BV Private Reserve, in fact. When Davis asked him why, he simply said, “lack of available French oak [after the war], but mainly because the owners were too cheap.” More than that, though, the aggressive American wood actually worked well with the fruit from Jordan’s estate vineyard, lacking as it did intense black flavors and hearty fruit tannins.

Davis had a different balance in mind for Jordan Cabernet, though, one more on par with favorite Bordeaux crus (Château Pichon Longueville Baron being a particular inspiration). And when Tom’s son, John Jordan, took the reins in 2005, he made his argument. “John cared less about ‘authorship’ of vineyard than he did about crafting a beautiful Cabernet full of black fruit,” says Davis. So he gave the green light to go outside the estate and begin adding better-quality fruit into the mix, from vineyards on benchlands and hillsides—a search he could only get right, Davis modestly claims, because of the terroir skills he had learned from Tchelistcheff.

With that superior fruit, Davis began introducing a larger percentage of French oak. While we tend to take for granted that French is the best choice, the reason it works with fruit that has significant tannin of its own is actually counterintuitive. “The tannins extracted from French oak,” explains Davis, “are three times more than those from American oak. So based on sheer arithmetic, you’d conclude that wine aged in French oak will be a lot more tannic.” Not so, apparently. Because of the attraction they have for each other, the tannin from French oak works in concert with fruit tannins to form a more complex and less tannic wine overall. New French oak actually “mollifies the broad, rich, deeper tannin from the terroir-driven fruit we receive now,” says Davis. “And the result is a much softer, rounder, richer feel.” Then too, French oak is more porous than American, and 20 percent more wine is lost in the aging process. The result: beautiful concentration.

In 2005, Davis made a “super blend” trial from grower sources, aged in 100 percent French oak. And in a recent tasting of that wine against Jordan’s regular 2005, which was comprised of mostly estate fruit, it was eminently clear why the younger Jordan would have approved the new trajectory. While the regular 2005 is an elegant wine, its juicy blackberry fruit layered with the complexities of tobacco, dark chocolate, and minerality, it’s a bit angular, with an herbal quality that leans just a tad green. The 2005 “super blend,” on the other hand, has a beautifully generous midpalate; ripe boysenberry and cassis are set off by florals and warm spice, all wrapped in fine tannins.

The Jordan 2015 Cabernet Sauvignon Alexander Valley ($57), aged in 100 percent French oak (50 percent of it new), leads with an intriguing nose marked by florals and exotic spice. Vibrant and concentrated black and blue fruit are set against an appealing smokebox character, with a smooth and elegant tannin structure for support.

What made sense about American oak 40 years ago simply no longer applies, and the true masters move on. Davis describes Tchelistcheff returning to Beaulieu Vineyard years after his tenure there. On tasting the Georges de Latour, he asked then-winemaker Joel Aiken (now a legend in his own right), “Why all the American oak?” (Actually, he asked, “Why all the damned American oak?”) To which Aiken replied, “André, you formulated the BV Private Reserve. We didn’t want to change your aging decision.” Reportedly André looked at Joel and said, “I am 90 years old. If I can change, why can’t you?” And today, BV’s Private Reserve is aged in 100 percent French oak too.