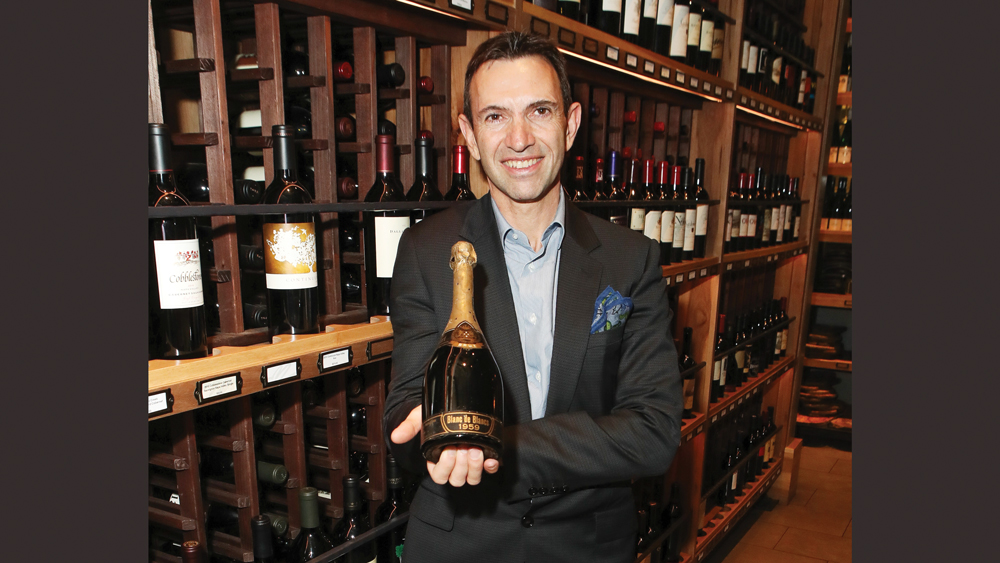 The world of rare wines poses many potential Holy Grails, but in Champagne, an obvious nominee is Dom Ruinart 1959 Blanc de Blancs, which even the house did not have in its cellar until recently. This lacuna may be explained by a 1960s advertisement, in which then-owner Bertrand Mure announced that all the wine’s production had been shipped to the United States. “It looks like the main market for Dom Ruinart was the U.S. market,” says the present chef de cave, Frédéric Panaïotis, who sought this prestige cuvée for more than a decade. His quest came to a conclusion earlier this year, when Matt Kaner, owner of several boutique wine bars in Southern California, contacted him. In 2016, Kaner and his business partner purchased the contents of the wine cellar belonging to composer David Rose. Not long afterward, Kaner’s partner shared with him an article on Panaïotis’s search for the first vintage of Dom Ruinart. “As soon as he said ‘1959,’ ” recalls Kaner, “we both got that feeling you get when your hair stands on end. We knew we had one bottle.” Panaïotis and Kaner met in Los Angeles on April 20 of this year, when Kaner presented Panaïotis with the trophy. “1959 is regarded as a fantastic year in Champagne,” notes Panaïotis, who has not tasted the wine. “I expect it to show a deep golden color and developed notes of marzipan, gingerbread, roasted coffee, and honey. However, we would need a second bottle to dare open it, so we’re still on the hunt!”

An advertisement from Bertrand Mure announcing that all the wine’s production had been shipped to the United States.  Photo: Courtesy

The Timeline Quest for Quality

Following a 1728 edict by King Louis XV that allowed sparkling wine to be sold in baskets containing 50 to 100 bottles, Nicolas Ruinart founds a Champagne house in honor of his uncle, the winemaking cleric Dom Thierry Ruinart.

Ruinart releases the first known example of rosé Champagne, 60 bottles of which are delivered to the chief cupbearer to the Duke of Mecklenburg-Strelitz in northern Germany.

On February 16, 1,500 bottles of Ruinart are shipped to the U.S. consul, located in Lorient, France. Because of the quantity and Lorient’s status as an export hub, the wines are certainly destined for the United States, making this the first shipment of Ruinart to the country.

Edmond Ruinart, head of the house, makes his first journey to the United States, visiting New York, Philadelphia, Baltimore, and Washington. He writes an account of his journey, in which he expresses regard for the fledgling nation.

Owner and director Bertrand Mure, a direct descendant of the Ruinart family, produces the house’s first vintage of Blanc de Blancs, a sparkling wine made exclusively with Chardonnay.

Mure releases a new wine in the Ruinart portfolio, Dom Ruinart Blanc de Blancs, the first vintage of which—1959—is fashioned with the U.S. market in mind. According to the brand’s advertisement, all 1,300 cases go to the States.